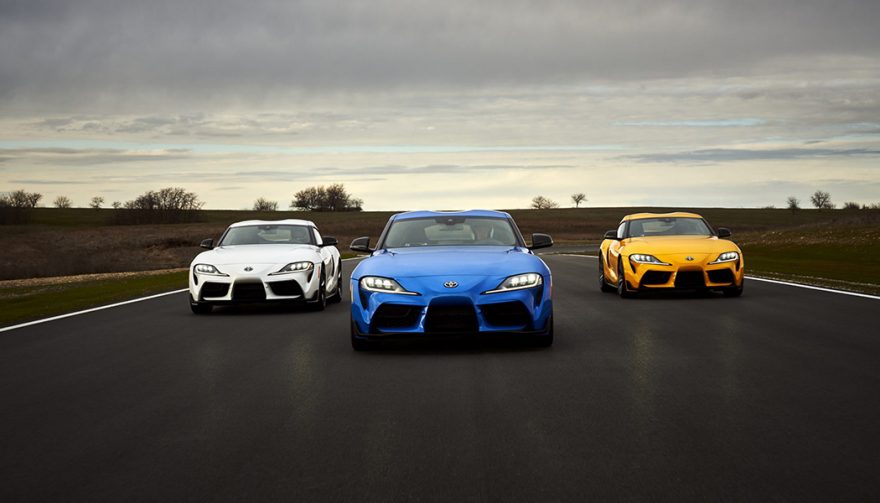 Just a year after the long-awaited return of the car in 2020, the 2021 Toyota Supra is bringing some serious changes to the sports car. Like more power, a smaller engine, and a special edition that offers two exclusive colours, an upgraded interior, and some carbon fibre trim for the outside.

The power boost for the 3.0L inline-six in the 2021 Toyota Supra is a big one. From 335 hp to 382 for a 14 percent boost from the turbocharged six. That boosts it to the same horsepower level as the BMW Z4 M40i, a roadster that shares much of its underpinnings (and that engine) with the Supra. Torque gets a boost as well, though it’s a smaller one. Just 3 lb-ft more to hit 368 lb-ft total. That torque arrives 200 rpm later, at 1,800, but it sticks around all the way to 5,000 rpm for a torque peak that’s flat for 300 rpm longer.

Toyota’s made some big changes to the Supra’s engine to boost that power. There is a new dual-branch exhaust manifold with one port per cylinder instead of three cylinders sharing a port like the old one. There are also new pistons that reduce the compression ratio to 10.2:1.

The automaker says that the 2021 Toyota Supra still loves to rev, and that the new engine should trim 0.2-seconds from the 0-60 mph run bringing it to just under four seconds.

With the new power comes new chassis tuning. Toyota has added aluminum bracing to the car, tieing the strut towers to the radiator support to stiffen the car. There are also new bump stops front and rear, revised dampers, and new programming for the adaptive suspension and active differential.

New for the 2021 Toyota Supra is a 2.0L turbo-four. The engine was available elsewhere in the world last year, but not here. The new entry-level Supra gets 255 hp and 295 lb-ft of torque, enough to let it hit 60 mph in 5.0 seconds. Thanks to the smaller engine, the Supra 2.0 is lighter than the six. Toyota uses smaller brake rotors with single-piston calipers, drops the active differential and adaptive suspension, fits manual seats, and a simpler stereo to all help trim 200 lbs from the car. Enough that it should be far more nimble than its bigger and more powerful sibling.

A replacement for 2020’s Launch Edition, 2021 gets 1,000 copies of a new A91 Edition. It uses the 3.0L six and comes in two colors. Nocturnal or Refraction, the latter an all-new and A91 exclusive. The A91 Supras get a carbon fibre lip spoiler at the rear along with carbon mirror caps as well as matte black wheels. On the inside, the cabin is trimmed with Alcantara and gets exclusive blue contrast accents. The 2021 Toyota Supra A91 will also get a special trunk mat, for those actually looking back there.