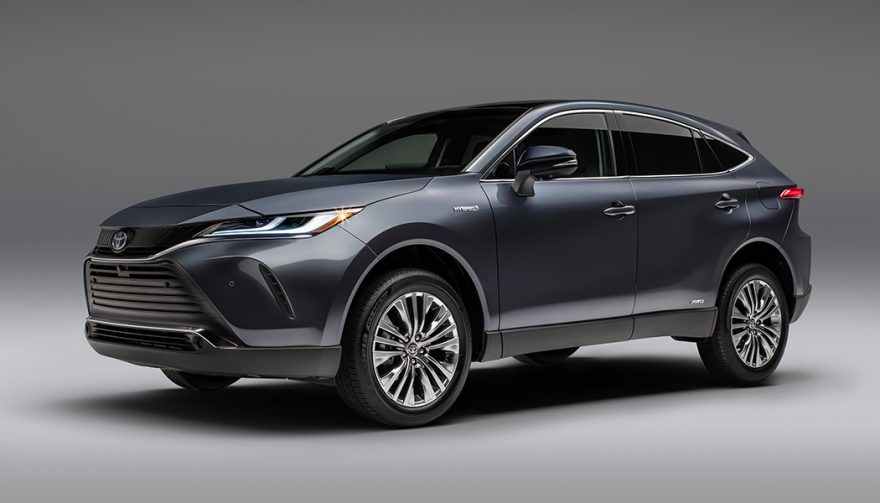 Toyota’s bringing back an old name on a brand-new vehicle to help fill yet another small niche in the crossover market. The Toyota Venza is back, and it’s a competitor for another name returned, Chevrolet’s Blazer, as well as the rest of the big two-row stylish crossover segment. It’s also coming exclusively as a hybrid.

The big two-row crossover segment was largely limited to just the Ford Edge and Nissan Murano for a number of years, but now it’s filling up, with the Toyota Venza just the latest.

The 2021 Toyota Venza is based on the Harrier, a model Toyota sells in other markets, but it’s been tailored for North America. It’ll come standard with electronic all-wheel drive, a system using an electric motor in the rear instead of a transfer case and driveshaft running to the back. That lets it put up to 80 percent of torque to the rear when conditions merit.

All Hybrid, All the Time

Giving the gas in the gas-electric hybrid is a 2.5L four-cylinder engine. Combine that with three electric motors and you get 219 total horsepower. You also get an estimated 40 mpg combined, an impressive figure for the 2021 Toyota Venza.

Predictive Efficient Drive uses the navigation system and analyzes your driving habits to predict when you’ll be slowing or stopping. It’ll then tell you where to slow down to help save gas.

Using a system borrowed from Lexus, the 2021 Toyota Venza sends cooled air only to occupied seats, helping save energy. The climate control system is operated through an available 12.3-inch display that also offers up Apple CarPlay and Android Auto connectivity. JBL Premium Audio is optional, the most powerful sytem ever put into a Toyota.

Look up in your 2021 Toyota Venza and check out the optional Star Gaze fixed panoramic roof. It uses electrochromic glass, meaning that you can switch it from clear to frosted with the push of a button, instead of having to wait for a blind to close. Toyota has made a 10-inch color head-up display to project hybrid info as well as speed and direction details.

A digital rear-view mirror is also new for Toyota, using a screen built into the mirror to display the feed from a camera mounted in the rear instead of the usual reflection of the inside of your vehicle. Limited trims come with a panoramic overhead camera view as well.

Cargo space isn’t limited by the hybrid driveline, Toyota has put the battery under the rear seat instead of in the trunk. That means 36.3 cubic feet of cargo space with the seats up, and a storage space for the tonneau cover if you’re not using it.