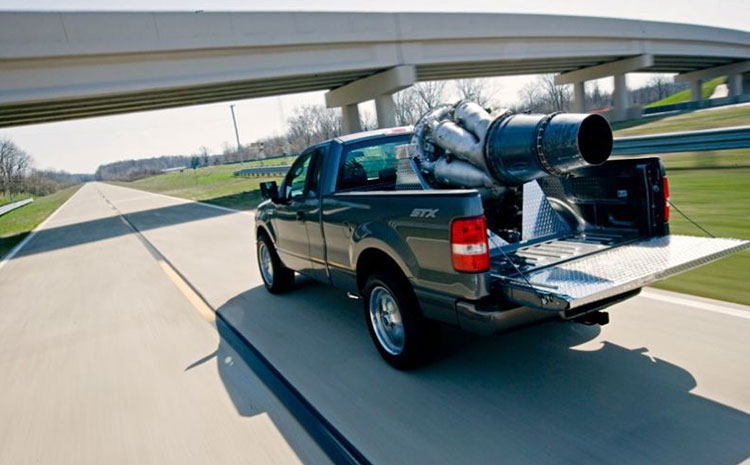 To the moon: a Ford F-150 gets a boost of HP with a custom jet engine.

Easy. Drop a jet engine in the truck bed and put the tailgate down.

That’s what Chris Lentz of Michigan did to fulfill a dream that he has had since boy hood. An electrical foreman by trade, Chris had always liked the idea of cruising around in a jet powered pickup. How cool is it to have a truck that can show off the flames, incredible exhaust tone and speed of a turbojet engine?

Thanks to a chance meeting with a guy that imports jet engines Chris was able to put his dream truck together and enjoy the flames and the noise…speed however is another story.

A pilot based in New York had a side business of importing turbofan jets from Czechoslovakia. Chris, after seeing one going full blast on a test stand plunked down $10,000 for a Motorlet M 701 jet engine that generates 1,900 pounds of thrust that formerly was used to power military jet trainer aircraft. Converting pounds of thrust to horsepower is a tricky and complicated formula so Chris just went with the 2700 hp number that appears in Jane’s catalog.

Over a period of time Chris tackled the engineering challenges of building a stand, installing a fuel tank, creating an ignition system and throttle control among others. With that done he was ready to test his jet truck where he discovered there are certain pluses and minuses associated with jet truck ownership.

The Pros of Owning a Jet Powered F-150

The Cons of Owning a Jet Powered F-150

This takes a bit of explaining so we won’t use the bullet point format. In test runs, the F-150 loaded down with 6,600 pounds of jet engine and fuel was able to go 0 to 60 in 8.5 seconds in the hybrid mode using both piston power and jet assist.  Quarter mile times were okay and after 45 seconds the truck got up to 140 mph.

Remember the last time you were on a plane? You’re sitting there on the runway listening to the engines spooling up and up and then the pilot releases the brakes. You’re not thrown back in your seat and you really don’t even feel the effect of four giant Rolls Royce engines until seconds before liftoff.

To get the advertised 2700 hp out of the Motorlet M 701 it has to have reached the RPMs that would drive the truck at 527 mph…which of course it doesn’t, and can’t given its mounting configuration.

Those engines on the airplane hang on the wing with nothing obstructing them — except the occasional flock of birds — from gulping the massive amounts of air needed to fuel the engine (like an air intake on a truck). The jet sitting on Chris’s F-150 truck bed has the back of the cabin directly in front of it. That engine is literally starving for air and as a result cannot achieve the RPMs needed to blast the truck down the road.

The jet truck consumes between 1 to 5 gallons of fuel per minute. The fuel tank holds 20 gallons of fuel. You do the math. If you want to impress a crowd you’re going to have to invite them to your driveway and watch you blast off to the corner ’cause that’s about as far as your fuel will carry you.

Burning Up the Road

With the heat from the exhaust you have to be careful driving on asphalt or you may literally burn up the road even if you are only going 50 mph.

So while a jet truck sounds like an extremely hot ride, just plopping a jet in the truck bed doesn’t turn it into a supercar.

Now if you want to do it right, look at the 30 year old Shockwave, a Peterbilt semi cab with three Pratt & Whiney jet engines that routinely hits 376 mph in a hurry. Shockwave performs commercially at air shows and drag strip tracks and is indeed a show not to be missed. Flames blasting from exhaust pipes, incredible noise culminating in a blast down the racetrack or airstrip doing a quarter mile in just over six seconds, that’s a jet truck that impresses.

Jet trucks most likely will not be appearing on a dealer’s lot anytime soon but it’s reassuring to know that America is still a place where a guy’s dream can come true if he works hard enough to make it happen.