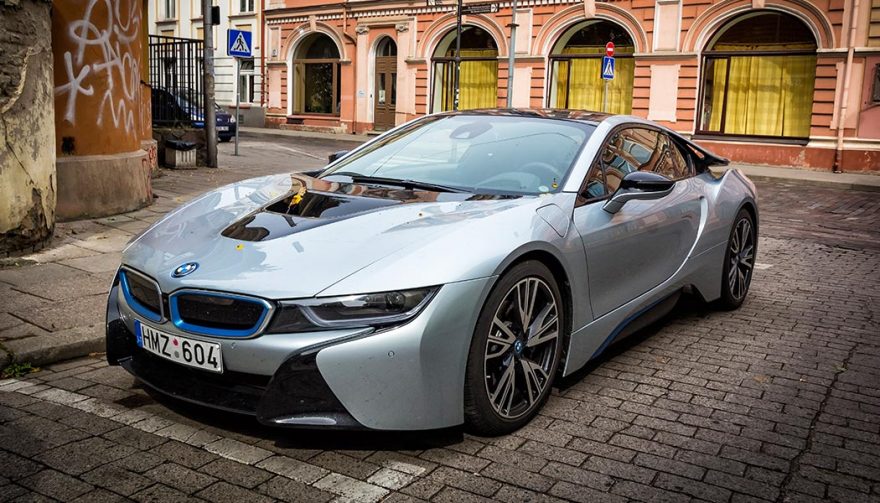 The BMW i8 is an electric car with a three banger gas engine to help out.

BMW i8: The Most Fun You’ll Ever Have With 3 Cylinders

When you see one of these things cruise by, you definitely will notice the WOW factor associated with it. In fact you don’t have to see it drive by to be struck with a bad case of “what the heck was that.”

The first time I saw one it was firmly lashed to the flatbed of a tow truck that slowly made its way down the street. I walked the two blocks down the street thinking that if I lived in New Mexico rather than Florida the object on the flatbed may have been a recovered UFO from Area 7. As it turned out it was a 2015 BMW i8, BMW’s “supercar” hybrid, on its way to a dealer in Miami.

Is it Manufactured or Born?

The word that best describes the appearance of BMW i8 is “organic.” You can’t imagine it being assembled in a factory. It’s far easier to imagine it being “birthed” at a secret BMW automotive lab. Even the sleek flowing lines of Maserati and Ferrari look crude compared to this hybrid’s profile.

What’s the most distinguishing feature of the i8’s appearance?

It’s difficult to say because there are so many. You could point to its floating side panels or shark nosed grill discreetly trimmed in electric blue or the swan doors or just the look and touch of the carbon fiber shell that makes up all the visible exterior surfaces. You could say it slices through the wind but it’s more accurate to say it is one with the wind given its incredible drag coefficient of 0.2.

It’s a package that impresses. It’s an attention magnet which can be both a good thing and a bad thing depending if the car behind you has a blue light bar or not.

The BMW i8 is a hybrid. It’s an electric car with a three banger gas engine to help out. That setup sounds more like a heavy duty lawnmower rather than an exotic sports car. But when you dig into the specifications the whole “super hybrid” thing comes into focus.

The i8 has four drive modes, all electric E Drive, almost all electric ECO PRO, comfort mode and …sport. If you are a purest you can cruise around the city (up to 15 miles) at 75 mph in all electric. Comfort is the default setting and starts in electric then kicks in the gas engine when you need the acceleration or power to climb a grade. Sport drive engages both the electric motor and the gas engine bringing to bear all the power the car has. It also turns the i8 into an AWD with electric power to the front and turbocharged power to the rear.

Inside this Thing is Way Cooler than Doc Brown’s Delorean

Marty McFly would really be impressed if he had the opportunity to sit inside a BMW i8 when he went into the future to 2015.

The interior of the car is what the cockpit of an F-16 would look like if it was built by Armani. Sleek design, Series 7 leather, an incredible array of technology, the electric blue trim perfectly accenting the space, comfort and ergonomic design (except for the small storage space in the console which opens towards the passenger side).

There is something for everyone inside this vehicle. It’s almost sensory overload. There are a ton of really cool features but here is a short list of favorites:

If you have $140,000, a charging station in your garage and you don’t mind making two trips to the grocery store because of the teeny tiny trunk, you owe it to yourself to check out the BMW i8 as your personal Back to the Future ride.