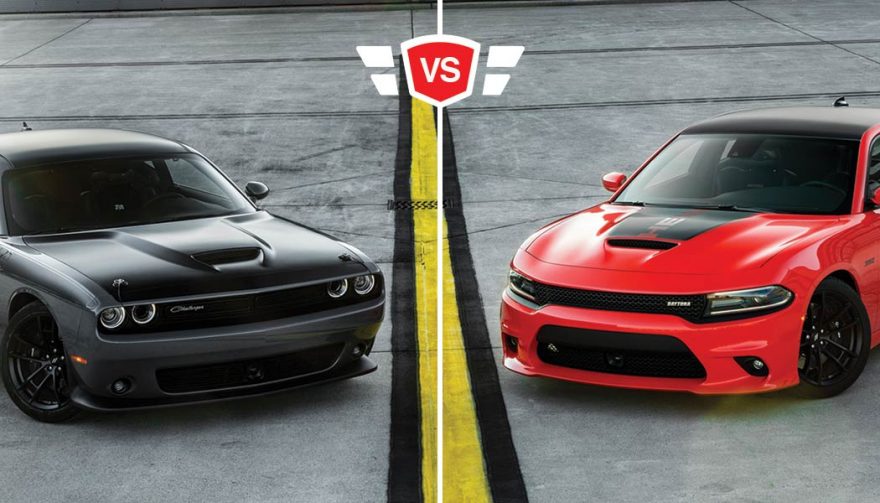 Which of these two speed buckets is the best?

Let’s look at the Dodge Charger vs Challenger muscle car comparison. Real ‘Mericans like a car that’s loud and goes very, very, fast in a straight line. Street racing was all the rage back in the golden years of the muscle car. Your grandpa might have participated in a race or two, and chances are he was driving a Dodge Charger or Dodge Challenger when he did. Fifty years later, these two iconic muscle cars are still prowling the streets offering up exciting, noisy, motorized thrills.

Dodge goes out of its way to nurture the bad boy, retro, boulevard cruiser image. Their designers have hit home runs with the 2018 versions of the Charger and Challenger. These are unabashedly American cars whose rough good looks have the street cred to back up the image. They are hot. They can be loud, and they are available in a paint color called “White Knuckle.”

These rides are not for everyone. They are for drivers that crave power, who want a cool-looking ride that makes cool sounding noises. But which of these two speed buckets is the best? That depends on what you are looking for. Here’s how the Dodge Charger vs Challenger size up to each other. 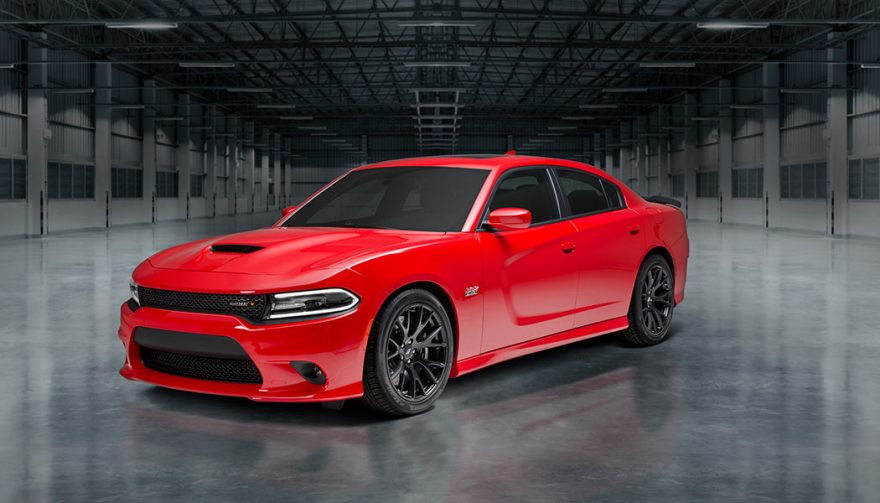 Muscle car image aside, the Dodge Charger is in fact a pretty practical sedan, as well as a speed demon. The cabin space is roomy and there is a bucketful of safety features. You also get a broad range of standard and optional creature comforts. Dodge’s Uconnect interface is one of the best on the market.

Starting at $28,495 for a RWD setup powered by a 300-horsepower V6, and ranging to $66,000 for the SRT Hellcat packing a supercharged 6.2-liter 707-horsepower V8, it’s obvious you want to study the options that Dodge has for the Charger. There are no fewer than 11 separate trims. The base SXT and GT trims come with the six-cylinder engine while the other nine have a variety of increasingly powerful V8s.

You May Also Enjoy:
The Dodge Demon Is Out and the Devil Is in the Details 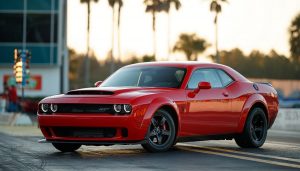 Those folks who paid for the big V8s are a bit ticked at Dodge this year. The V8 trims have distinctive front ends. Owners see this design feature with a certain sense of exclusivity. This year Dodge stuck that front end on the base SXT with its puny V6. Well, there goes the neighborhood.

The Looks, The Ride, The Whole Package

Overall, the Dodge Charger is a family sedan you can take to the track. As a performance-based platform, the ride is stiffer than other full-size sedans. You will feel the bumps and holes in the pavement but not overly so. It’s also noisier inside the cabin than many of the competition. The steering feels heavy at slower speeds but on the highway, it inspires driver confidence. 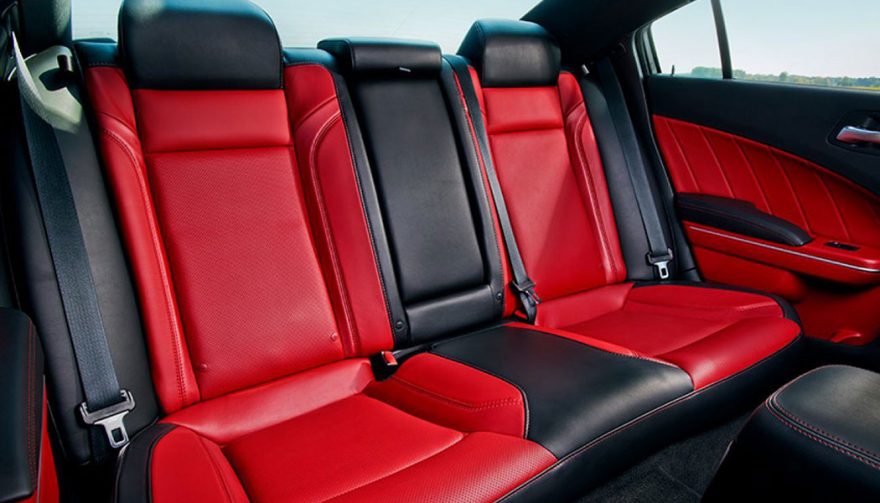 If you liked the way the Dodge Charger looked in 2011 then you’ll like the 2018 design. There is little change other than the expansion of the V8 front end to V6 trims. The car looks like a mean street machine from the late ’60s slicked up with modern materials and an insane collection of rims.

It’s fun to drive. It’s fun to listen to. And it’s fun to stomp down on the pedal, get tossed back into the seat and watch the gas gauge go down.

Now if you could just see out of it. Thick window pillars make visibility to the rear difficult. Fortunately a rearview camera with cross traffic alert is standard this year. 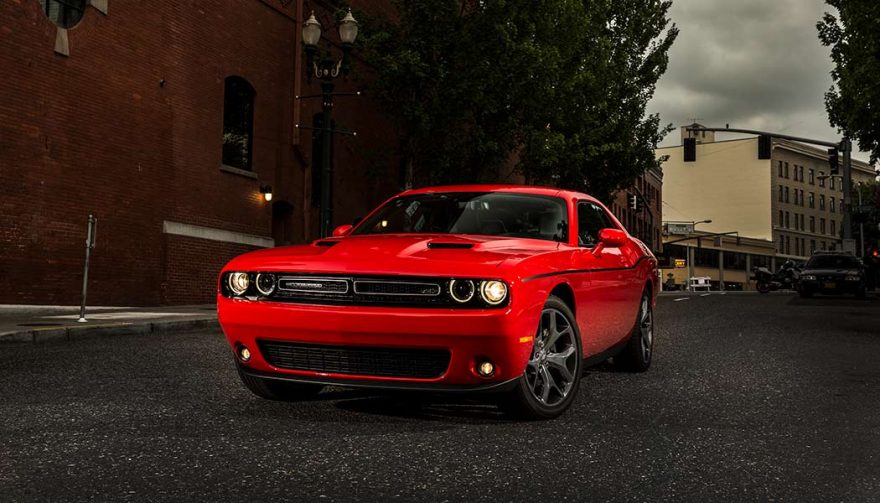 Now this one is a perfect balance of old school cool and modern performance. If you see one of these retro monsters coming up on you in your rearview mirror, you can be pretty sure that the driver is wired just a little bit differently. Designed to compete against the Chevrolet Camaro and Ford Mustang, the Challenger is bigger, badder and definitely cooler looking.

Like its sibling the Charger, the Challenger comes in a wide variety of trims and powerplants. The Challenger starts at $26,995 for the 307-horsepower six cylinder.

If you have about $44,000, you can be the coolest dude on the block with the Challenger ScatPack. It features a 485-horsepower, 6.4-liter V8. And if you pair it with the eight-speed automatic instead of the six-speed manual you save $10,00 on the gas-guzzler tax. Standard features on the ScatPack include 20-inch wheels, rearview camera with cross traffic alert, 4 cylinder Brembo brakes, rear parking sensors, and 8.4-inch Uconnect touchscreen with Apple CarPlay and Android Auto.

The Dodge Challenger is a bit of a porker compared to the Camaro and Mustang. It’s bigger and when you give it curves, it bulls its way through them swaying threateningly. Going fast down a quarter mile is in its DNA. Zero-to-60 time is 4.2 seconds and the quarter mile is gobbled up in 12.3 seconds. It’s not a sports car, it’s a dragster.

Inside looks a bit out of the 70s. The Uconnect screen is easy to reach and the instrument cluster is simple and uncluttered. Being chunky means there is more room inside. Rear leg room is 3 inches greater than the competition, making hauling adults in the back a reality. 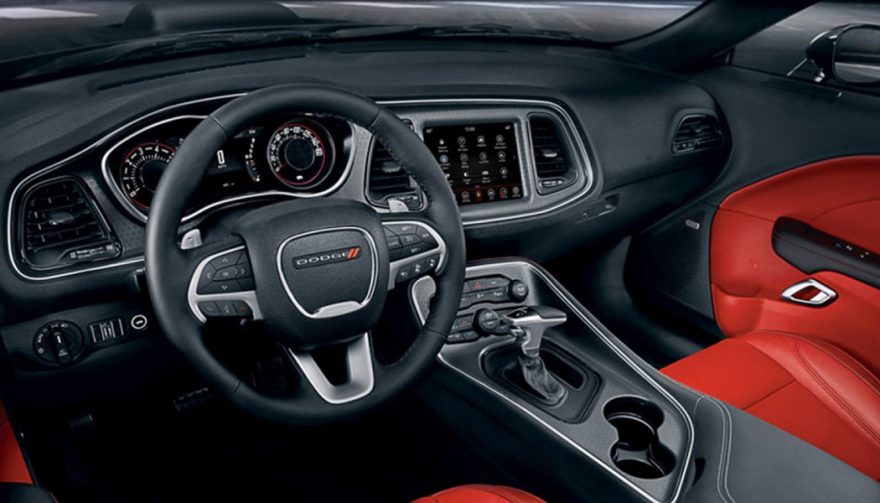 Like the Charger, visibility out the back in the Challenger is difficult. The rearview camera with cross-traffic alert is an absolute must.

If you are looking for a “look” or a serious street and track machine, the Challenger is a ride you have to consider.

Charger vs Challenger: Which is Best?

So which is better? If you are a married person the question might be which can you sell to your spouse.

Both cars are hot street rides with track-quality power. Both have a cool retro appeal, and both make a lot of noise going very, very, fast in a straight line. You be the judge.