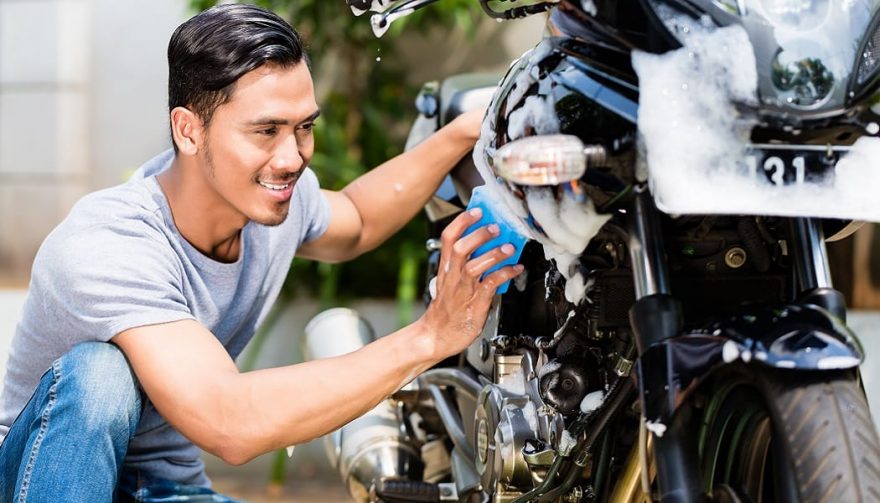 If you don't know how to clean a motorcycle the right way, you can cause serious damage to your bike

How to Clean a Motorcycle: It’s Not as Easy as You Might Think

If you don’t know how to clean a motorcycle, you can cause some serious damage if you’re not careful.

You might have it looking great, doing a meticulous job, but lo and behold there are a lot of problems now. Let’s look what can go wrong.

If You Don’t Know How to Clean a Motorcycle, Things Go Wrong Quickly

Dwayne just finished washing his motorcycle and it looks great, just like new. He didn’t miss a nook or cranny. Dwayne is feeling proud and enjoys the satisfaction of a job well done. The problem is he doesn’t how to clean a motorcycle correctly.

Now the bike won’t start. Hitting the starter button doesn’t even make the engine turn over. And Dwayne notices that some of the other electrical switches don’t work either.

After taking all that apart, cleaning and drying their components, and then reassembling everything the bike starts but runs poorly. Water had made its way to the paper air filter, closing its pores, ruining it and starving the engine for air.

After replacing the air filter, Dwayne is ready to ride. But now the chain is noisy. It squeaks, and it is very annoying. And his windshield that used to be so crystal clear is now cloudy. The brakes don’t feel right either. They don’t stop the bike as well as they used to.

This is turning into a bad day for Dwayne.

Simple Precautions Before You Start Cleaning

Avoiding all of these problems would have been easy. As Dwayne returns from his very disappointing ride, he sees his neighbor Judy washing her motorcycle.

Unlike Dwayne, Judy never seems to be plagued with mechanical problems, and she is approaching even this simple cleaning chore very differently than he did.

First, Judy takes old plastic grocery bags and wraps them around the handlebars, carefully covering up all the electrical switches and buttons. She secures the bags in place with rubber bands she had saved from junk mail. How clever.

Next Judy wraps a plastic bag around the speedometer, tachometer and other instruments. Then she neatly folds an old towel and places it on top of the instruments, to absorb water and to hold the plastic bag in place.

She also uses a plastic sandwich bag to cover the brake fluid reservoir on the right handlebar, and secures that with another rubber band or two.

She places small pieces of masking tape over the key switch, luggage locks and over the seat lock to keep water out of those key cylinders.

You May Also Enjoy:
Two-Wheel Flat? Here’s How to Change a Motorcycle Tire 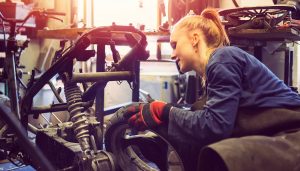 Lastly Judy stuffs old rags into the engine air ducts, to prevent water from reaching the air filter. Dwayne hadn’t done any of that, and feels sheepish as he watches all the careful preparation Judy is doing before she even begins cleaning her bike.

Get the Bike Upright for Easy Cleaning

Judy’s bike is a cruiser, so it doesn’t have a center stand. Rather than lie on the ground to clean the left side of the motorcycle, Judy gets her inexpensive motorcycle scissors jack out of the garage, and with it raises the bike to an upright position.

Now the entire left side of the bike, with all its nooks and crannies, is easily accessible.

Use the Correct Cleaners

Rather than spray household cleaner all over the bike, and then hosing it off with a powerful stream of water, Judy approaches cleaning differently. She has an assortment of cleaners, rags, towels and brushes, and approaches the project one step at a time.

First, to clean the heavy grease and road grime from under the engine, Judy sprays on a powerful green cleaner. Letting it soak in a few minutes, she loosens the really thick deposits with a soft brush, and a toothbrush she bought at the dollar store, then rinses it all off with a gentle stream of water.

Start Cleaning from the Bottom Up

Next Judy sprays motorcycle cleaner on the engine where oil mist has been seeping out and accumulating dust and grime, being careful not to drown any of the engine’s electrical components.

She scrubs the grime gently with a soft brush, then gently rinses it off. A strong jet of water would get things wet that need to stay dry.

Be Careful Cleaning the Brakes

The brake fluid reservoirs need to be kept dry. Water leaking into them will dissolve the brake fluid, making the brakes feel mushy and soon completely ruining the hydraulic system.

Dwayne had simply sprayed his green cleaner over the brake assemblies. The powerful cleaner took all the dust, grease and grime off, but also washed out any grease that was remaining in the caliper mounting pins and slides. Now the calipers don’t move freely under braking, and give an uncertain feel through the handlebar lever and brake pedal. The strong cleaner had also dulled the pretty finish on the caliper bodies.

Judy sprays her motorcycle cleaner on the brakes, soft brushes them quickly, and then immediately rinses them off. They won’t be spotless, but they won’t be damaged either. She washes her bike often enough to keep the brake calipers looking clean.

With the bike on the jack, Judy uses ordinary car wash detergent and water to bathe the spokes, wheels and tires, scrubbing with the assortment of brushes at her disposal.

Why did Dwayne’s chain start squeaking after he washed it with his green cleaner? Because today’s chains are permanently lubricated, and the lubricant is held within the chain’s rollers by neoprene O-rings, two to each roller.

The O-rings need to be kept lubricated to help hold the grease in place. Dwayne’s powerful cleaner had washed the O-rings dry of lubricant, hence the squeaking.

Judy uses a stiff bristle brush and old rags to scrub and wipe the grime off the chain, not using cleaner of any type. If she needs any liquid at all to help get the chain clean, she uses WD-40, not a harsh cleaner.

Again, she does this about three times a year, so cleaning the chain doesn’t take very much time. The next time she returns from a ride on the bike, while the chain is still warm, she will spray her special chain lubricant on the chain, being careful not to get overspray on the back tire and wheel.

Dwayne had used glass cleaner on his windshield, even though motorcycle windshields are not made of glass. The strong cleaner marred the plastic’s shiny finish.

Judy understands that powerful cleaners mar and dull clear plastic, so she simply soaks her windshield with the car wash soap and water. When the dead bugs and grime are soaked well, she gently scrubs the windshield with a soft brush that won’t scratch it.

The inside of the windshield only needs to be wiped with a clean damp cloth to get it clean. Likewise, the speedometer and gauges don’t get that dirty, so Judy simply wipes them off with a damp cloth, and doesn’t drown them with a garden hose like Dwayne did to his bike’s gauges.

Get the Finishing Touches Right

Rather than try to blast down the interstate to dry the bike off, Judy blows it off with a leaf blower, then dries any remaining moisture with a towel. Ordinary car wax works well on the painted surfaces, and normal chrome cleaner shines up the chrome pieces well.

While Judy puts the finishing touches on her bike, Dwayne walks over and says that he thinks his bike has a leaking head gasket, because he sees oil seeping out past it.

Seems that Dwayne had washed his engine when it was hot, and the cold water did something to the hot aluminum cylinder head, causing the leak to start. Judy nods in sympathy.

She never cleans her bike while it is hot, and always lets it cool down overnight before spraying water on the engine.