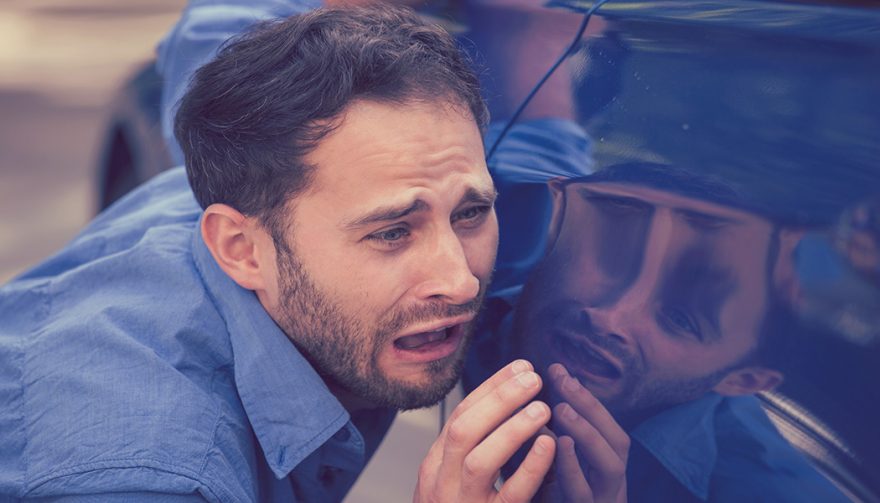 It can happen to the best of us. Dings, scrapes, and scuffs. Don't worry, we're here to tell you how to fix scratches on a car

Paint Oops? Here’s How to Fix Scratches on a Car

Scratches on the finish of your car can be annoying. But trying to fix them with harsh abrasives that make the damage even worse would be extremely annoying. Today’s vehicles have only a thin layer of paint on them, and you have to be extra careful with it. So, before you grab that can of polishing compound your dad used to remove scratches from his old car, let’s step back a bit and learn what’s going on with modern paint. And the right ways how to fix scratches on a car.

Scratches Happen When You Wash Your Car

Washing cars is a Saturday tradition. We begin by spraying water on our car to soften the dirt, then grab a sponge from the bucket of soapy water and rub it over the paint. The sponge drags the dirt around and scratches the paint.

So, don’t do that. Water alone will not loosen dirt, bugs, tar specks, and road grime. Get a mix-sprayer and hose your car down with soapy water. Let it soak in a bit while the soap does the loosening work that the hapless water by itself could not do. After a while, hose the soapy water off. Then you can use that sponge on the paint. That way you don’t need to know how to fix scratches on a car

Years ago, vehicles had a thick layer of paint that contained pigment all the way through it, from top to bottom. To visualize that, imagine a thick layer of enamel or lacquer, applied on top of a good, thick coat of primer.

When scratches were shallow and did not penetrate through the paint to the primer, repairing the damage was easy. People would just polish the affected area until it was smooth, and the scratches would disappear. That was how to fix scratches on a car back then. Of course, they were removing a layer of paint as deep as the scratches were. Nowadays, that method won’t work on scratches of more than a shallow depth.

Modern vehicles have a thin layer of paint (it’s more economical than a thick layer) called the base coat. On top of that is a thin layer of clear coat, called, of course, the clear coat. That’s the shiny part you see that reflects sunlight on a bright day. The clear coat protects the pigmented base coat from acid rain, tar specks, road grime, vehicle exhaust fumes, bugs, and things like that.

So, when you see the term ‘base coat clear coat’ know that it refers to a two-part painting process, not including the primer coat or any metal prep coat under that. Instead of old-fashioned enamel or lacquer, water-based paints are popular in today’s manufacturing. One reason is that water-based paints are more environmentally friendly.

Suppose your car has shallow scratches that don’t go through to the base coat. A well-meaning friend might suggest you get some polishing compound, which is a mild abrasive, and a machine buffer from your local department store and then polish those scratches out. That’s how to fix scratches on a car, they’ll tell you.

Unless you are very experienced doing that type of delicate work, chances are pretty good that you will burn through the thin clear coat and damage the base coat. That will look terrible. Extremely annoying, as we said.

Then you have an expensive paint repair to deal with. So, unless you are very skilled with abrasives and machine buffers (And we all know that experience comes with what? With mistakes) leave the polishing compound and the machine buffing to your local body shop.

In the meantime, there are some less aggressive things you can try to remove light scratches when you’re learning how to fix scratches on a car

A clay bar is your first line of attack. Just as it sounds, it is a small bar of specially formulated clay. It’s only mildly abrasive. The clay bar will often remove light scratches and the mild dullness that comes from acid rain.

Easy to follow instructions will be printed on the box the clay comes in, and guys, nobody will fault you for reading those instructions. If you’re not comfortable with that, then read them when nobody is around.

The short story is to wash the car in the cool shade, spray some detailing fluid on a small area, then gently rub the clay over the paint. The detailing fluid and the friction of the moving clay will remove, ever so slightly, the uppermost, minuscule layer of clear coat.

As the clay begins to pick up debris, knead it like dough to expose a fresh area. Repeat until you have the entire vehicle done. Buy the clay bar and spray detailing fluid at your local department store or auto parts store.
It’s a good idea to use a clay bar on the entire painted surface of your car once a year. That will help keep the paint clean, smooth, and shiny.

If you don’t want to do all the work of that a clay bar entails, then you can try using wax on the affected area. Yes, the wax will fill up the scratch and make it disappear. Yes, the wax will eventually turn yellow from exposure to the hot sun and look bad. Yes, you will have to deal with the same scratch again as that happens.

Therefore, when you’re working on how to fix a scratch on your car, try using liquid automotive wax. Liquid wax contains a weak cleaning chemical that eats through the layer of grime, and the wax component leaves a polymer finish on the paint. The cleaning action might dissolve the very edges of the scratch, lessening its severity.

If you are in the mood to really use elbow grease, why I wouldn’t know, then you can buy a tin of ‘cleaner wax’ for your car. It’s a thick paste, as you would expect, and contains a very, very mild abrasive compound. Think of it as mildly abrasive as toothpaste.

Apply it to a small area of your freshly washed car, working in the shade, of course. Then impatiently wait for it to dry to a hard-to-remove haze. When you are satisfied that it can’t possibly harden anymore, buff it off, using all the clean, soft rags you have in your garage. Maybe you could even buy some new soft rags. You get the idea. Just be sure you don’t damage that clear coat or you’ll be moving beyond how to fix scratches on a car .

Deeper Scratches and Chips – Rust Is Your Enemy

Rust knows no rest. That sounds like the title of a novel, doesn’t it? But we all know that rust is relentless in its mission to eat away all the steel in your car’s thin metal skin.

Any rust removal is best left to a body shop. They should know how to remove it without destroying the entire surrounding area. Before that happens, though, it’s better to prevent rust from happening. Look over your car’s paint for chips and deep scratches immediately after each washing. Think of it as an intervention for your car’s paint.

If you don’t have a well-matching, high-quality bottle of touch up paint (who does, right?) you could apply a very fine, very thin layer of clear fingernail polish to the affected area. Don’t smear it all over the place for good measure. Just apply the minimum necessary. You want to prevent air from reaching the primer layer beneath the base coat (primer does not block oxygen from reaching the metal underneath it). Without oxygen, rust won’t occur. Or so they tell me.

It’s about time for another word of caution because that’s how we do things. Test the fingernail polish on an inconspicuous area of paint first. That will avoid strife with your spouse for damaging their car. Where? Perhaps inside the trunk or on a door jamb. Just don’t start out by putting a big blob of it on the hood or near the driver’s door handle. If the paint reacts badly to the fingernail polish, then don’t use it. But it’s always worked well on all my cars and motorcycles.

How to Buy Touch Up Paint

If you bristled when I inferred that most people don’t have the correct color of touch-up paint that matches their car perfectly, it means that you know how to buy it. If you don’t object, then, I will tell everybody else the secret when they’re learning how to fix scratches on a car .

Somewhere on your vehicle, in a place you would never think to look, is a decal that contains information on every major component that went into building your vehicle. It will give the engine size, type of transmission, axle ratio, interior trim package, interior and exterior color scheme, a whole bunch of other mostly useless data, and embedded in all that is your car’s paint color code.

To locate that decal, try looking inside the glovebox (nobody keeps gloves in there, but that’s another story) or in any other storage compartment in your car.

Don’t expect any of that wealth of info to be in English or any other written language. That would make too much sense. It will be written in a code of numbers and letters that would make ancient Egyptian hieroglyphics look simple. But you need that paint code to give to the parts people at your local dealership. Then they can tell you that that color of touch-up paint has been discontinued and is no longer available for sale.

How long does it take manufacturers to discontinue touch-up paint colors? Typically, as long as it takes you to make the first six monthly payments on your new car. A word to the wise, then, buy it when your vehicle is brand new.

When to Leave It to A Professional?

Deep scratches, rust, and severe scuff marks warrant professional attention. Don’t make a small problem worse. Sometimes it isn’t how to fix scratches on a car, but how to find a good autobody shop.