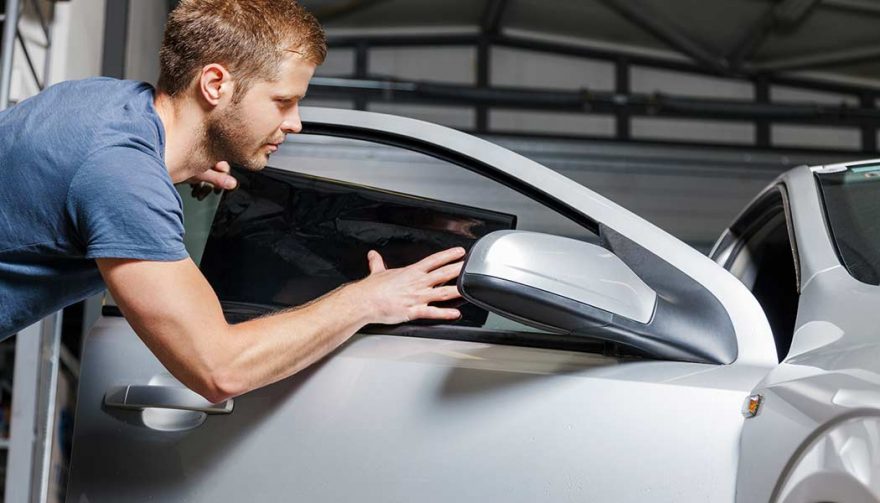 Don't start your project on a day when you don't have a lot of time.

How to Remove Window Tint: It’s All About Dissolving the Glue

Your dark window tint is peeling. Ouch, that looks bad. Maybe it’s scratched from rubbing on the window felt. Bubbles in it? That looks even worse. Whatever the problem, you need to know how to remove window tint.

As with most things in car repair, there is more than one way to do it. The more you know before you start, the easier the operation will be. At least that’s the common reasoning.

What is Window Film Made Of?

Polyester is not just for cheap clothing. Yes, as you guessed, the window film is a type of polyester plastic. There are several manufacturing methods that give tinting film its actual color.

Dye could be used in the plastic’s compound, with pigmenting added. Metal ingredients could also be added in, and even a ceramic material can be embedded in the film. That accounts for all the varying prices of window film. Better costs more. Such is life.

Not to be overlooked is the glue that holds the film on to the window. As we shall soon learn, dissolving that layer of glue is what the work is all about.

Why Have Tinted Car Windows?

Sure, it looks good. But there are other reasons to have tinted windows. Comfort is one. Tinting blocks some UV rays, which keeps the interior of your car cooler. Security is another.

A little tinting might dissuade a casual thief from perusing your car in the parking lot mall.

Now the work begins. Since the film is already peeling, you might be tempted to just grab a loose piece of the film and start pulling it off.

Notice how it split, and all you removed was a jagged piece of film? Now it looks worse than before. And all that hardened glue remained behind on the glass.

Round Up Some Supplies

Only attempt this job on a day when you have a lot of patience, and a lot of time. That forewarns us about what we’re getting in to.

You May Also Enjoy:
4 Tips for Choosing the Best Engine Oil 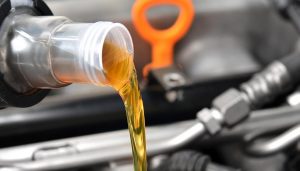 You will need a spray bottle. One quart will do. Get some liquid soap, like a high-quality dish washing soap. Buy a razor blade scraper and spare blades. Buy lots of paper towels, and get the good ones too. Don’t skimp, because this is going to make a big mess. Finally, get some black plastic garbage bags. Yes, they have to be black. It’s important. Scissors will come in handy to cut the garbage bags to shape.

And if things get really bad trying to get the old window film off, you might have to wait for a bright, hot, sunny day. That’s when the black plastic bags come into play.

If you live inside the Arctic Circle, or any such place where sunny days won’t be happening anytime soon, buy an electric heat gun from your hardware store. They sell them to help people remove old paint from furniture and such.

Grasp the film where it has already come loose from the glass, and spray some of your soapy water mixture behind it. That will start dissolving the glue and loosen its hold on the glass. After a few seconds, gently apply pulling pressure on the film. If the glue has dissolved, some film will come off.

Now spray more soapy water on the back of the film, wait a few more seconds, and peel some more. Continue like that.

It might help to work with the razor scraper to encourage the film to peel faster, but don’t rush too fast. As you make a big mess, use the paper towels to dry off the excess water and film bits from the door panel, seats, carpet, your arms, hands, shirt, well, you get the idea. It makes a mess.

Invariably, some small jagged pieces of film will remain on the windows. Scrape them off with your razor scraper and soapy water. If you’ve ever removed wallpaper from a house, you will recognize this as the same type of operation. Work, wait, work, repeat.

So, It Didn’t Work

That’s not surprising, nothing is that easy. So here’s another way. Some people have used vinegar instead of soapy water, others have used ammonia.

Obviously, you don’t want to breath ammonia under any circumstances, and why end up with a car that smells like vinegar? Try those at your own risk.

Get More Serious With It

The glue is not dissolving. That’s the problem. So, soak it good, then immediately cover the film with a layer of the black plastic garbage bags that you cut to size. Spread it on tightly. The layer of plastic will keep the soapy water from evaporating.

Park the car in the hot sun, wait 30 minutes for the magic to happen, then peel off the plastic bags. If all worked right, much if the film will come off with it.

Still Not Coming Off?

Remember the heat gun you bought? Gently, gently, warm the window film and pull it off or scrape with the razor blade.

Go slowly, and use low heat, because you don’t want to break the window by heating a small area and expanding the glass to the point of breakage. Be patient.

If you’re into cars as a hobby, you are probably aware that there are some things that you can’t do with window tint. Yes, police officers can measure the amount of light that your window tint blocks, and ticket you if it is over a certain amount.

Also, to that point, your car’s front side windows have more stricter standards than rear windows, for safety reasons.

How much is that? It varies with each state. Check with your local DMV. But common sense dictates that police officers must be able to clearly see any people, threats or hazards inside the car, especially at night. For that matter, you need to see out your windows, too, to see what’s happening in traffic.