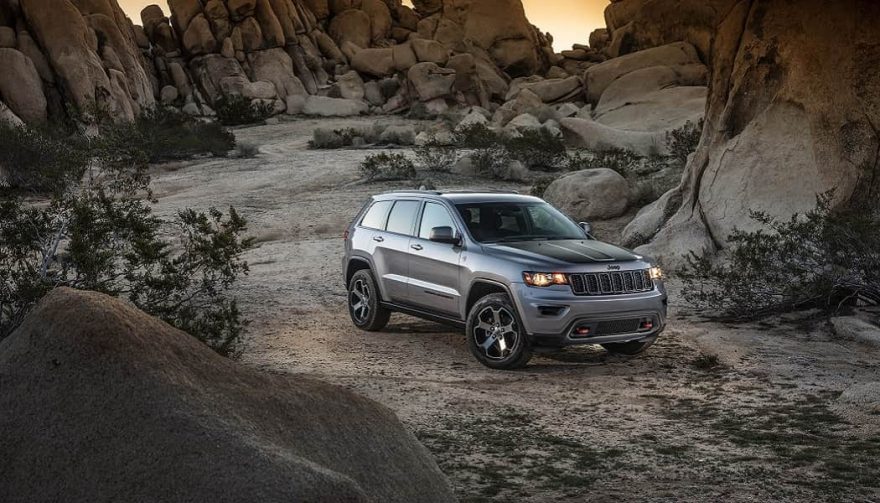 The Jeep Grand Cherokee Trailhawk is becoming an SUV darling

The Jeep Grand Cherokee Trailhawk is the 2017 SUV of the Year, according to Four Wheeler magazine.

Interestingly, it wasn’t that long ago when Jeepers called the Grand Cherokee a “mall cruiser.” The joke was that with its unibody construction, the SUV was only suited for climbing over islands in mall parking lots. Times have changed, thanks to the new Trailhawk model.

Four Wheeler isn’t the only one talking up the Jeep Grand Cherokee Trailhawk. But its praise of the vehicle is going the farthest, and is getting at least some hardcore Jeepers to reconsider their opinion of the Grand Cherokee.

What Makes the Trailhawk Special

Already, the current-generation Grand Cherokee is fairly capable on trails. The Trailhawk is different, because it’s something you could take on the most technical Moab trails and not get in trouble.

It comes with Quadra-Drive II, Jeep’s most robust four-wheel drive. The setup includes an electronic limited-slip differential. Adding the optional Quadra-Lift air suspension boosts travel and articulation. Other equipment suitable for trail runs include skid plates, hill-descent and hill-ascent control and 18-inch Goodyear Adventure off-road tires (they’re reinforced with Kevlar). Red tow hooks make finding them when covered with grime easier, which can be handy for urgent recoveries. The hood is covered with a matte black decal, which prevents sun glare from blinding drivers.

Most notable is the Trail Rated badge on the front fender. Jeep doesn’t treat that badge lightly. Any vehicle wearing it must pass a rigorous off-road test to ensure it can get through all kinds of tough situations.

The interior gets some special treatments. Black leather and suede performance seats, with red accent stitching, make a bold statement. So do brushed piano black and gun-metal trim pieces.

You May Also Enjoy:
Should You Take the Jeep Grand Cherokee Summit Off Road? 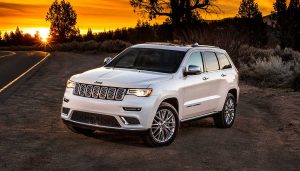 You get other comforts, like an 8.4-inch infotainment screen, where advanced info about wheel articulation, four-wheel-drive system performance, suspension height, etc. can be displayed. It’s pretty posh.

The publication didn’t just say the Jeep Grand Cherokee Trailhawk won because competition this year was soft, In the writeup, it said “its off-road performance was nearly unstoppable.” Wow. That’s some high praise from a source that’s usually critical of rigs.

Four Wheeler cited several factors that make the Trailhawk an off-road beast. One is the approach, departure and breakover angles. Those come in at 36.1 degrees (if you remove the front air dam), 27.1 degrees and 22.8 degrees. All those figures are with the optional air suspension, which you should get if you’re going to bother with the Trailhawk.

Another big factor was the crawl ratio in first gear. When you shift the Trail Hawk’s transfer case into low range, it uses a 44.1:1 crawl ratio, which is impressive, to say the least.

Four Wheeler isn’t the only publication saying the Grand Cherokee Trailhawk is the real deal. Kelley Blue Book notes it’s comparable to much more expensive imported SUVs, making the Jeep a solid deal. Reviewers were amazed at how capable the rig is on trails.

Auto123, which was critical of the previous Trailhawk model, praised this one for being significantly different from other Grand Cherokee models. The reviewer went so far as to say it was almost as trail-worthy as the Wrangler Unlimited.

Autoblog is calling the Trailhawk a Jeep “for grown-ups.” Like others, reviewers from the website thought it was at least close enough to on par with the Wrangler. The additional creature comforts seemed to have helped cast a positive light on the SUV.

Motor Trend is calling the Trailhawk an “overlander’s dream.” It observed that even with the air suspension, the SUV never bottomed out. The review noted that an EcoDiesel version is coming, which could make the Jeep even more trail capable.

Better Than the Wrangler?

Jeep purists get upset when anyone brings this factor up. After all, comfort is for sissies who don’t like getting dirty. The thing is, some people want to hit some decent trails on the weekend, but not suffer when commuting to and from work. The Wrangler doesn’t serve that purpose as well.

Models like the Grand Cherokee Trailhawk help Jeep fight Land Rover. If you think the British SUV maker isn’t a threat, you haven’t been paying attention. Don’t worry, Jeep has been, and it’s bringing back the Wagoneer and Grand Wagoneer to help.

Sure, the Jeep Grand Cherokee Trailhawk isn’t for everyone. What vehicle is? But it’s a true off-roader, and can make everyday life comfortable. You might find it’s the perfect SUV to keep you happy on the weekdays as well as the weekends.