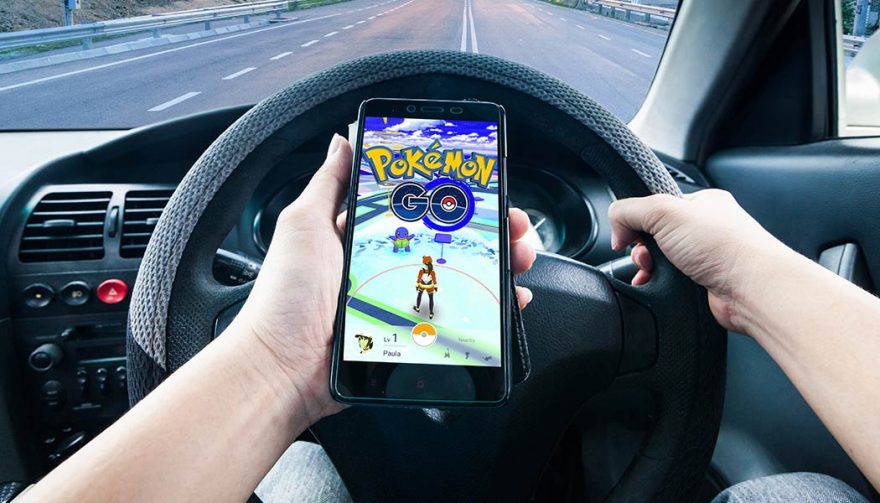 Is Pokemon Go the Cause of Car Accidents?

There’s a dangerous fad sweeping the nation. There have been accidents, injuries, arrests, and it’s only a matter of time until a death toll mounts. Symptoms include blurred vision, crossed eyes, distraction, and babbling like an idiot. Grown men and women utter the word “Pikachu”. And it’s all because of a crazy little game developed by Niantic, Inc..

Niantic created the latest interactive video, Pokémon Go. Players use their smartphone to collect Pokémon characters from around their neighborhoods, cities, and even across the world. It combines Google Maps pins and the game to create waypoints where users can find these cartoonish characters.

It’s true, this kids game is like mind control for adults as well. The problem lies in the fact that many adults — who should be responsible — are showing they have mush for brains and racking up the damages. There have been car accidents and injuries; there’s bound to be lawsuits. And could it even result in Pokémon-related car insurance riders?

In case you don’t believe it, here are five Pokémon Go-related accidents. And yes, they could’ve all been prevented by safe gaming.

This past week in Maryland, an SUV piloted by a Pokémon Go player rear-ended a police cruiser. The Baltimore police car was stopped on the side of the road when the Toyota RAV4 came up behind it with some speed. The SUV slammed into the rear end of the cruiser and careened off.

Luckily, there was no one in the cruiser. Even more lucky, the incident was caught on an officer’s body cam. When the driver was asked about the accident, he said that he had his head down, playing Pokémon Go.

The driver commented, “That’s what I get for playing this dumb ass game.” Dude, you probably could’ve come up with a better excuse than Pokémon, just to save face.

Not once, but twice was a police cruiser tagged by another vehicle. This time in Quebec City, Canada, a pair of Pokémon Go players in a car reversed suddenly in a library parking lot – right into the front end of a police car.

The police car was behind the offending vehicle because they were about to be pulled over on a totally related offence. The driver failed to signal when they made a turn, probably because they were distracted. The accident caused minor injuries to both police officers in the car.

The driver of the car admitted to playing Pokémon Go while driving. He got away lucky, receiving a $30 ticket for not signaling, and another $30 ticket for not looking behind the car before reversing. And probably a little body damage on his car, too.

Pikachu in a Tree?

In Auburn, New York, a 28-year-old driver demolished his car when he drove his car off the road accidentally. He smoked a tree squarely with the front end of his car, going accordion-style with his hood. The police chief remarked that the car’s engine “was actually starting to come into the passenger compartment.” That means the driver hit the tree full speed ahead.

Again, the driver admitted to being distracted behind the wheel while playing Pokémon Go. His car is a total loss, and he suffered minor cuts to his legs and disorientation (probably why he admitted to playing the game). It could’ve been worse, though, as the engine could’ve been sitting on his lap.

This time, the accident isn’t the driver’s fault. A 15-year-old girl in Pennsylvania was playing the Pokémon Go in the late afternoon last week when she found herself at a busy highway. When she attempted to cross — in rush hour, no less — she was creamed by a car that couldn’t stop in time.

The girl, Autumn Diesroth, suffered a collarbone and a foot injury, and cuts and bruises all over her body. Her mother has urged other parents not to let their children play the augmented-reality game. She said, “Parents, don’t let your kids play this game because you don’t want to go through what I went through last night. I really thought I was losing my daughter.”

It’s not just in North America, folks. In the Land Down Under, in a city named Toowomba, a woman backed her car into someone else at a place known as Picnic Point west of Brisbane. A bystander commented that cars were parking all over the place, obviously chasing Pokémon, when the accident happened.

It was a minor fender-bender, but apparently bad enough to file an insurance claim.

If you’re planning on going out Pokémon-hunting, please be safe (I can’t believe it actually has to be said). It’s just like texting and driving, only worse because it’s highly interactive and distracting. Remember that other motorists, pedestrians, and cyclists on the road depend on you paying attention to the road for their safety.