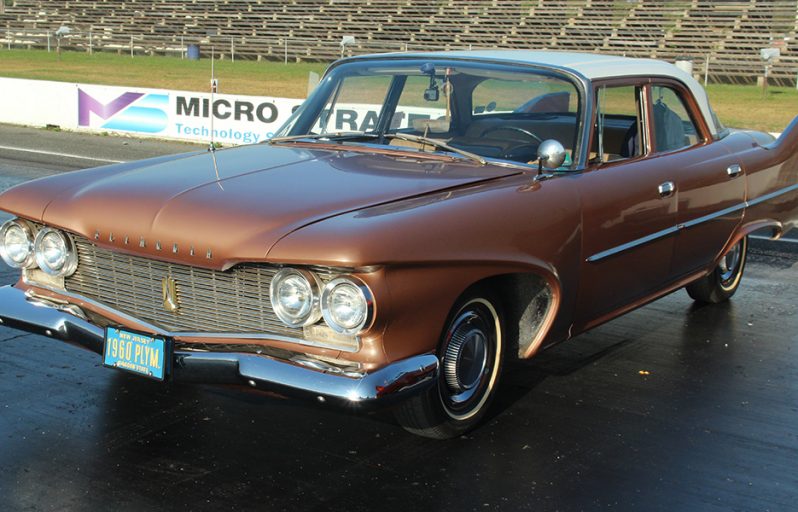 I have had more than my share of ups and downs with this project, I can say it has been worth it. 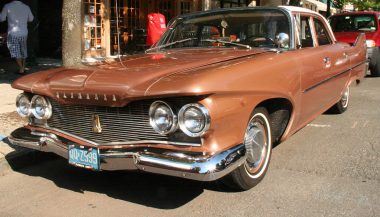 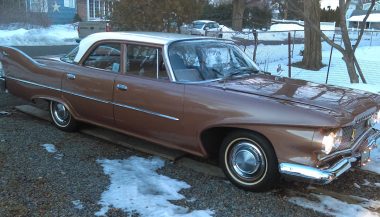 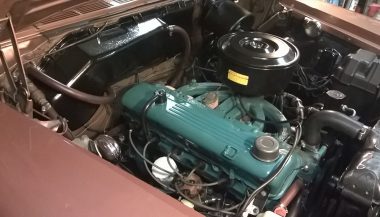 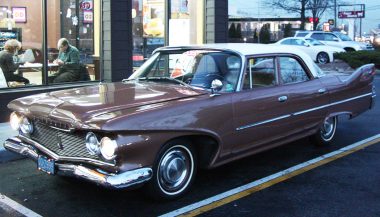 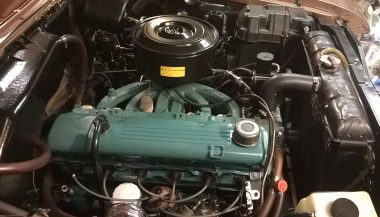 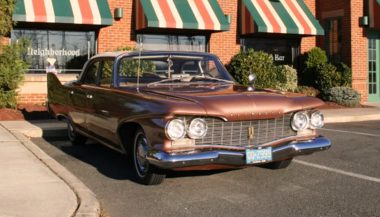 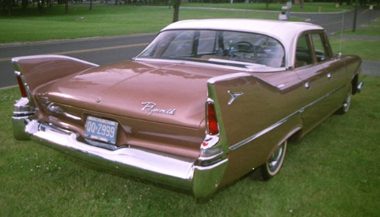 I have had more than my share of ups and downs with this project, I can say it has been worth it.

My 1960 Plymouth Savoy was purchased new by my father on June 13, 1960 from Rossmeyer Chrysler/Plymouth in Metuchen, NJ Since the purchase of the 60 came not long after having moved into a new home, my father wasn’t exactly flush with cash with which to buy, or run a new car. However, the 1949 Plymouth he was driving was on its last legs, and a replacement for it was imperative. Therefore, though a new car purchase had been decided upon as unavoidable, the car had to be reasonable in cost to purchase and operate, thus a six cylinder Savoy model became the vehicle of choice for my father. As time went on, and the miles rolled by, the choice made in 1960 proved to be a wise one, as the 1960 Plymouth provided many faithful, economical years of service as the family Taxi, grocery getter, etc.

The Slant- six which powered what is now my Plymouth definitely gave the economy of operation my father needed from the car, while giving ample power to haul a full complement of passengers comfortably, (six at least), and their luggage. My Plymouth was the household mainstay until June 1972, when it was displaced from its top dog position. By 1972 my Plymouth was starting to show the effects of 12 years of heavy duty service, and my parents decided it was time to purchase a new family car. Unlike its predecessor though, my Plymouth was not traded in on its replacement, but as can be surmised, just demoted to second banana. Unfortunately for my Plymouth, demotion wasn’t the worst fate it was to suffer. 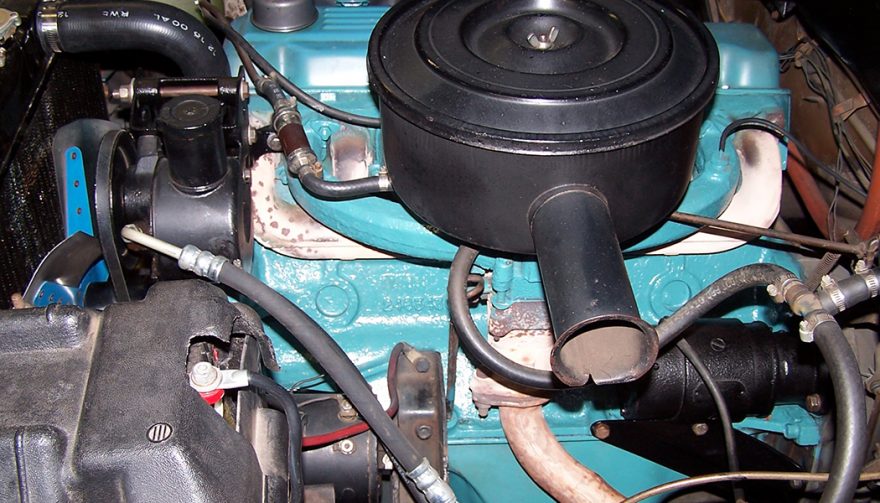 About a year after its demotion, a “friend of mine”, convinced this then naive teenager that my Plymouth’s engine needed to be rebuilt, and lucky me, he could help me in that endeavor. It seems that my Plymouth’s engine would smoke upon start-up, and for short time thereafter. So knowing little about engines, or cars in general, I believed my friend had to be right about the need to overhaul the engine. Well, you know 20/20 hindsight is wonderful, in that now I can say, what a mistake that was believing my friend’s astute observations, not to mention my unbridled faith in his mechanical abilities. After the “rebuild”, the Plymouth’s engine wouldn’t even turn, didn’t smoke, but it also didn’t do anything else. The first thing that dawned on me at that point in time, was I should have checked with an experienced Mechanic regarding what to do about the smoke problem. The next thing I realized, was I should have asked my father if I should even think of getting involved in such a big job as an engine overhaul, without his supervision, after all dad was a Mechanical Engineer.

After the ill-fated engine overhaul, my Plymouth sat for about a year. At one point during that year of sitting idle, my father considered simply junking the car, but the paltry $25.00 he was offered for the car, if he hauled it down to the junkyard, dissuaded him from doing so. At the end of the year of idle time, I made yet another not so good decision. I decided I was going to purchase a “good used engine” from a well know national automotive mail order firm. The engine turned out to be a piece of junk, and since it took my High School Auto-Shop teacher three months to get around to installing it, the mail order company refused to take back the engine. The end result of this latest fiasco, was still more idle time for my Plymouth, until I could find an engine rebuilder who would be at least willing to look at the used engine to determine if it was at all salvageable. I finally did locate an engine rebuilder through my Aunt, who happened to be doing accounting work for the rebuilder. The rebuilder looked over the used motor, and determined that it would cost more to salvage it than it was worth, and offered me core credit towards an already rebuilt motor. The rebuilt engine was installed, and the rebuilder also replaced the transmission they damaged due to errors made by their workers doing the engine installation. Six months after arriving at the rebuilder’s shop, and what ended up being 1-1/2 years after my original fateful engine rebuild decision, plus some threats of legal action brought on by the rebuilder’s foot dragging in the engine installation process, my Plymouth emerged from the shop under her own power for the first time. The year by this time was 1975, the month was February. I then embarked on the long, arduous task of restoring my Plymouth to her former glory.

Of the approximately 51,000 of her kind produced in 1960 for sale to the general public, my Plymouth has survived to become one of 87 of her kind left nationally, and one of 3 still surviving in New Jersey.

The task was complicated by my lack of knowledge as to where to source needed restoration parts from, (i.e. fenders, patch panels for the rear quarters, and trim pieces), and an over exuberant youth’s driving technique. Needless to say that between what was already deteriorated from age, what broke by my pushing the old gal to the limit quite often, compounded by my lack of knowledge as to where to get many of the parts my car needed, slowed the rate of progress in the restoration of my car. Though it took a few years, some dented fenders, and lots of hard earned money, I did finally wise up, treating my aging Plymouth more carefully. I also started attending car shows, as well as joining a couple of car clubs, finding along the way, that through the car clubs and shows I could get information on where to locate parts for my car. I also made many new friends through my involvement in the clubs. Now that I had a means via which to locate the parts I needed for my project, I set about procuring them.

In 1978 I had the first body restoration done on my Plymouth. In the summer of 1985 I finally got the interior redone. I then embarked on making other improvements to my Plymouth, such as adding factory power steering, power brakes, clock, am radio, and factory front anti-sway bar. In the summer of 1989, I had the bodywork redone, and the bumpers and tail lamps rechromed. Though the body shop didn’t do all they were supposed to, my Plymouth did look better than it did back in February 1975. In July of 1991 another milestone was reached in the ongoing project my Plymouth had become. I was sitting by my car at a show in Fairfield, N.J., when an older gentleman approached me, asking if I owned the car I was sitting near. I replied yes, whereupon the man showed me a photograph of a factory authorized optional RCA record player that fit my Plymouth. The gentleman then asked me if I knew what the item in the photograph was, I replied yes. I then asked what the man wanted for the player. The price quoted was $200.00, which included the correct radio to go with the record player. Mind you, all this occurs just 1 month before I was getting married, and the fiancée is off shopping at a nearby mall. I asked the man if he had a business card, he replied yes, and handed me one. When my fiancée returned from the mall, I asked if she approved of my buying the record player, she emphatically agreed. When I got home I called to see if the player was still available, the answer was yes. I then made arrangements to go up to where the owner of the player lived to pick it up. I took my find home, and 2 weeks before my wedding day, found myself under the dashboard installing my new find. Of course one might wonder why someone would so hurriedly install something, especially since it wasn’t crucial to the operation of the vehicle. Well, you see my soon to be wife wanted to use my Plymouth as our wedding limousine, and she wanted that record player in there too. I succeeded on both counts. 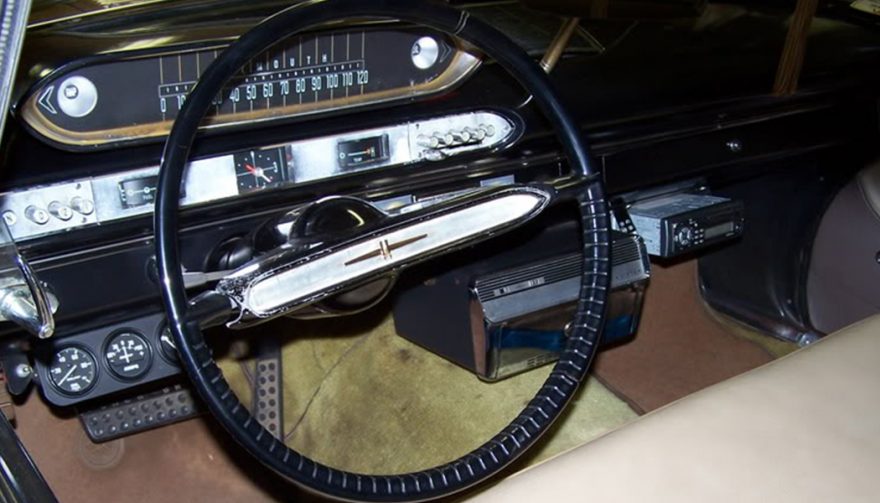 Though it has now been 43 years since I first got started on the restoration of my Plymouth, and I have had more than my share of ups and downs with this project, I can say it has been worth it. Not only has my Plymouth served as the wedding limo for my wife, and I, it also has survived long enough to serve as transport home from the hospital for my son, Martin, after he was born. As a matter of fact my son initially liked my Plymouth over my other toy, due to the fact it doesn’t have a locking steering column. So, therefore my Plymouth served as the world’s largest pacifier when he was younger. My son would sit in the car at shows, and pretend drive to his heart’s content. He was and is, also fascinated by the record player, as are many who have viewed it at shows I have attended since its installation. I’ve even had the pleasure of showing my Plymouth, along with its “RCA Record Player”, to Martin’s 2nd grade class last year, and the aforementioned “Record Player” generated quite a bit of attention, not to mention a humorous moment. Seems I decided to remove one of the 45 rpm records from the “Record Player” tray, and ask my Son’s classmates if they could identify what I was holding up. One intrepid young fellow held up his hand and I called upon him. In a rather timid, sort of half questioning tone of voice, the little boy said-“a CD”? I smiled, and replied, um, sort of. I then instructed my Son’s classmates to ask their Moms and Dads to explain to them what a 45 rpm record was. Oh, and the reason I was showing my Plymouth to a 2nd grade class, was it was there as an example of “rolling history”. The little boy referred to above, is now a young adult, and often drives my Plymouth, when I need a second driver to bring that car, and my other car to a Show or Parade.

All in all its been a long and winding road, filled with potholes, and detours, but as I said, overall it has been worth the effort. Much like the mythical Phoenix, my Plymouth rose from the ashes to live again, to serve 3 generations of our family, and become a rolling piece of automotive history in the process. One other thing, of approximately 51,000 of her kind produced in 1960 for sale to the general public, my Plymouth has survived to become one of 87 of her kind left nationally, and one of 3 still surviving in New Jersey.

Check out my other project car shared on WheelScene, a 1976 Pontiac Trans Am here. 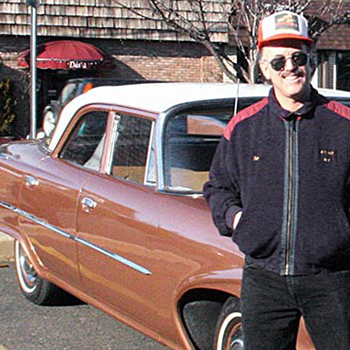