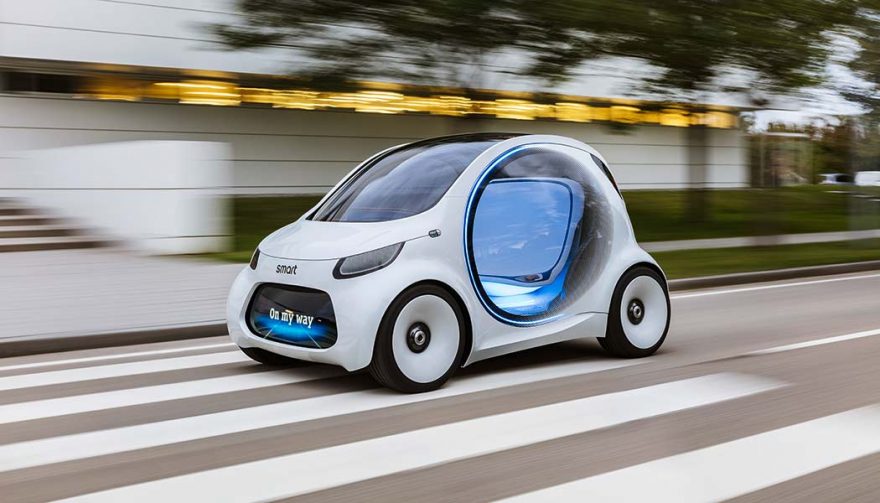 Smart arrived in the United States at a time when gas prices were ridiculously high. Everyone thought Daimler’s timing was perfect. Thanks to a combination of questionable designs and significantly lower prices at the pump, the brand hasn’t become a roaring success stateside.

That could all change, and in a way most weren’t expecting. While Smart has been forging ahead with electrification, it’s also taking a hard look at something just as revolutionary: autonomous tech.

The Future of Car Sharing?

In case you’re not aware, Smart has been quietly building an empire in the car sharing world. While most people aren’t keen on owning the strange little cars, they’re great for parking in tight spots. For that reason, a growing number of metropolitan areas in the US and elsewhere are getting fleets of Car2Go Smart ForTwos.

The Smart Vision EQ ForTwo is showing a new possibility. Thanks to the autonomous drive unit, you wouldn’t have to walk to where the car is parked. Instead, using your phone, you just call the car to wherever you are. Or you can schedule a place and time for a pickup.

One of the first questions people will have is how anyone will know which autonomous Car2Go Smart they’re supposed to get inside. Smart thought of that issue already. The Black Panel Grille up front and projection surfaces on the sides can show whatever you request, so at first glance you can tell which vehicle is picking you up.

While you probably get that this concept is targeted at hip urbanites who would use car sharing services, there’s another target group. Smart is looking to appeal to municipal authorities. After all, the brand will have to persuade officials to let them run full-autonomous vehicles in city streets.

Since Smart knows most people will be focusing on the interior, that portion of the car has been featured highly in this concept. Designers worked to maximizing space in every way possible, so people can get in and feel like they’re in a much larger car.

You May Also Enjoy:
Gas-Powered Smart Car Getting the Axe, Electric Continues 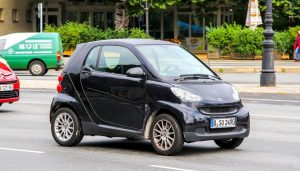 You’ll notice there’s no steering wheel or pedals. After all, the car does all the driving, so Smart figures they’d be unnecessary.

Passengers can project whatever information they want onto the side windows. A special film on the glass makes that possible.

Also, Smart thinks people will want to share the autonomous car with strangers. With two seats inside, you could indicate it’s all right to pick up someone else, if you’re feeling friendly. But the person inside can view the profiles of potential fellow passengers, and either accept or reject picking them up. Once a second person has entered the car, the screen at the front will show shared interests between the two people, like sports they both play or concerts they’ve both attended.

Smarts aren’t exactly known for being attractive. Admittedly, this Smart Vision EQ ForTwo concept isn’t anywhere near as sexy as an AMG GT. Still, it looks better than the current batch of ForTwos.

Instead of weird protrusions anywhere, the car overall is quite sleek in its appearance. The grille doesn’t have a sneer to it. That’s refreshing, because too many modern vehicles take aggressive styling to the extreme.

The Black Panel on the front grille measures 44 inches wide. It announces if the car is occupied or available for hire. On either side are LED headlights you can change in the way they look, from sporty to classic, and more. You can also change how the taillights look.

A film that coats the doors on the Smart Vision EQ ForTwo is the most bizarre design element. When activated, it can show things like local weather forecasts, news updates, or the local time.

Of course, as an advanced vehicle coming from a brand that’s going to switch to an all-EV lineup soon, the Smart Vision EQ ForTwo concept has an electric powertrain. A 30 kWh lithium-ion battery feeds power. When nobody is in the car, and it’s getting low on charge, it will automatically go to a charging station. Of course, since nobody will be there to plug in a cord, charging will have to be inductive.

Smart likes to point out that it launched its first electric model back in 2007, before most had ever heard of Tesla. Daimler is looking to go all-in on electrification, including with the Mercedes-Benz lineup. In fact, over 10 electric models will launch into the market by 2022.

Another big component of the Smart Vision EQ ForTwo concept is the fact it uses swarm intelligence. Not all autonomous drive units do or will leverage the same methods to drive without incident. With swarm intelligence, each car has the ability to “read” its surroundings using various sensors. It can learn and adapt to changing circumstances, such as road construction.

The genius of swarm intelligence is that all the autonomous Smarts in a city can pool information. So if one learns there’s a sink hole that suddenly opened up on a certain street, all the cars know to avoid the area.

Some argue that swarm intelligence decreases the likelihood of harckers hijacking autonomous cars. We don’t really know if that’s the case, since widespread, real-world autonomous vehicle fleets haven’t been launched, yet.

While a production car will probably look less futuristic, this concept could herald a real-world vehicle in the next two to three years.