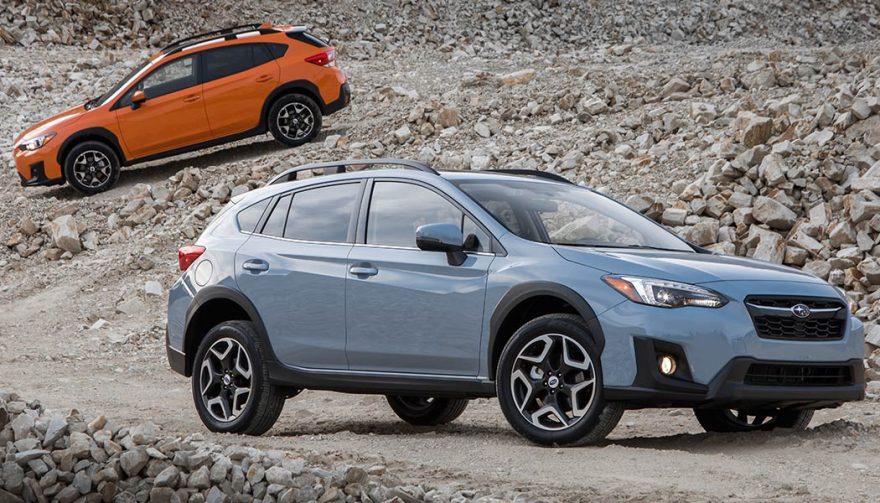 The 2018 Crosstrek is fuel efficient and bad road ready.

Be Ready for Anything with the New Subaru Crosstrek

Crossovers offer some big features that the old and boring passenger sedan can’t. There’s the tougher look, of course, and a theoretical ability to go off-road that will never be used. The big draw, however, is the extra height, which gives drivers better visibility and makes it easier to get in and out.

But turning the station wagon into a crossover adds weight, putting a strain on suspension and drivetrain parts and hurting fuel economy. So what if instead of building a bigger and beefier crossover, you just lifted up the station wagon you already sell?

That’s what Subaru did with the Outback, and what it’s done to the Impreza to make the Crosstrek. And it works — really well.

Subaru started down the “wagon into crossover” road with the Outback. With a slight suspension lift, a cladding playbook borrowed from the heydays of Pontiac and ads featuring the very imitable Paul Hogan, the wagon into crossover was born. The success of that car led to a sedan version, as well as a smaller Impreza-based Outback Sport.

With the fourth generation Impreza, the Outback Sport was dropped in favor of the Crosstrek name. And while this 2018 model might not look it, it’s an all new vehicle, sharing the latest Subaru platform that sits under the latest Impreza.

When you first see photos of the newest Crosstrek model, it doesn’t look like much has changed over the old one. But if you give it further inspection, especially if there is a last-gen model around, you’ll see the look has definitely been updated. The nose is a little more upright, and the side scallop adds some class.

The changes outside are mostly appearance based: a black carbon look cladding on the bumpers, door sills and wheel arches; a roof rack; and, depending on the trim you choose, dark tinted windows. Additionally, it’s taller — by about five inches. 3.6 of those are from the increase in ride height, the rest is from the roof rack. 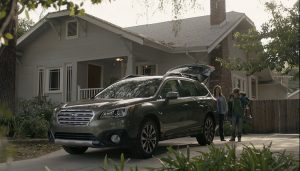 Does moving the suspension up wreck the car? In short, no. It makes it better. Like the Impreza, it rides and handles in a uniquely Subaru way. The suspension is soft in the first inches of travel but then stiffens up. Toss it hard into a corner and wait while it rolls. But once it takes a set, it hangs on tenaciously.

That suspension softness pays dividends on the road — and not just gravel and dirt trails, but on real roads too. That’s because in much of the country, paved roads are becoming less asphalt and more pothole every day. The Crosstrek soaks up the worst of those roads. And the taller tire sidewall helps protect your wheels… and your fillings.

The extra height lets it soak up bumps on the worst dirt roads too. The Crosstrek feels at home on a rally road; after all, it is a Subaru. Toss it into a corner, mat the gas and the car stops rolling and starts pulling you out the other side. It’s a lot of fun in the dirt, but great on the moonscape that is most downtown streets.

If you’re planning on taking it off-road, the X-mode selection button adds low-speed hill descent control. On uphill sections, it keeps the CVT in a higher gear range for added torque while applying more clutch pressure to the all-wheel drive system. The traction control system is also then set to respond more quickly to a slipping wheel and adjust torque distribution accordingly.

The engine is a 2.0L flat-four that produces 152 hp and 145 lb-ft of torque. A six-speed manual comes on Base and Premium trim vehicles, with a CVT optional on those and standard on Limited. It’s enough to move the Crosstrek comfortably, although this vehicle is far from quick.

The CVT, though, is one of the better ones on the market. It lets the engine rev quickly and has less of the “elastic band from a stop” feeling that other automakers suffer from in their CVTs. Paddle shift controls allow you to pick from seven preset ratios, and you will want to use them off-road.

Fuel economy from the combination is excellent and puts it near the top of the class. It’s a good trade off for the lackluster thrust. 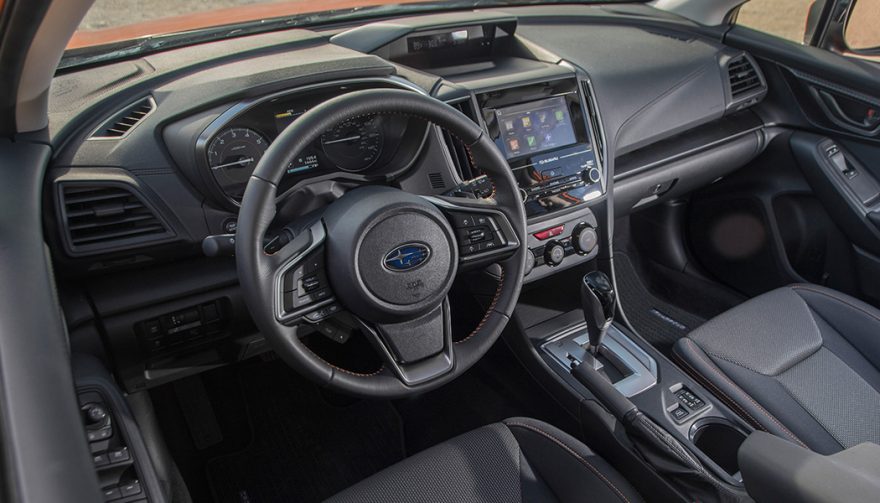 Inside, Base Crosstreks get a 6.5 inch Starlink touchscreen that offers Apple CarPlay and Android auto connectivity. Limited trims get an 8.0 inch screen with navigation as an option. Limited models also get a color multi-function display above the stereo that shows fuel economy, climate control settings, audio information, off-road oriented info or even the weather.

Subaru’s system runs smoothly and is easy to use. The HVAC system uses knobs and buttons and doesn’t require you to take your eyes off the road to access touchscreen menus.

My tester had Subaru’s EyeSight driver assistance system that has adaptive cruise control, pre-collision automatic braking, lane departure warnings and lane keep assist. It worked well, with no false alarms in my driving. Reverse automatic braking is optional and helps ensure you don’t nudge anything or anyone when you’re backing up.

The Crosstrek is one of my favorite crossovers because it’s the most car-like. That’s because it is a car — but it’s one with the advantages of better visibility and improved ground clearance you would expect from a crossover, as well as the ease of entry from having the seats higher up. It also offers excellent fuel economy and bad road ready suspension.

The Crosstrek crosschecks most of the right boxes in this segment.