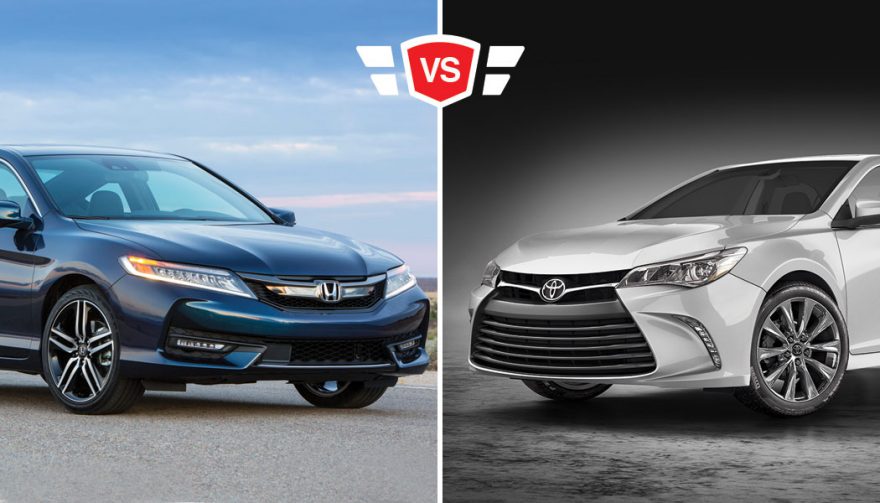 A Toyota Camry or Honda Accord? The 2017 releases have greater appeal to younger people.

The Great Debate: Toyota Camry Or Honda Accord?

Picture this: you walk into a retirement home and find Grandpa Jack wrestling Opa Bill. There’s a crowd of blue-haired spectators jeering and cheering, rooting for their favorite. Like a responsible adult, you break up the fight and set about determining what started the altercation. It’s just like the raging debate over which car is better, the Toyota Camry or Honda Accord.

Yes, it seems rather ridiculous. But in the past, the Toyota Camry or Honda Accord just weren’t very exciting for anyone but the elderly. That’s who you’d usually find behind the wheel, driving 10 miles per hour slower than the rest of traffic on their way to Bingo.

The 2017 releases of the two sedans take a bit of a turn, though they are still some of the best commuter cars out there. Their appeal is geared more towards families and professionals, and less to the white-topped generation. How do you decide which one suits you better though? Instead of acting like Bill and Jack, take a look at some of the details, then make your choice between the Toyota Camry or Honda Accord.

So it’s not the most objective of angles, but you have to love (or at least like) the looks of your car. Step back and take a gander at both models. Which one strikes your fancy?

The 2017 Toyota Camry has changed a great deal from the previous generation. The rounded edges make way for sharper lines. The stance is more aggressive, tipped forward like a sports sedan. But there’s still something… elderly about it. The grille is a little soft, and the trunk is the same. It’s much better than before, but just not quite there yet.

Then there’s the 2017 Honda Accord. There’s a reason it’s been the best-selling car in America for the past 40 years. It looks sharp, even though it’s not all that different than the Camry. Somehow it’s softly-curving front grille is meaner looking and the body lines look more like a premium brand than a Honda. And if you’re in it solely for the looks, you won’t find a two-door Camry to match up with the 2017 Accord Coupe.

If it’s all about appearance, the Accord takes the prize. But there’s always more to it than just looks.

Let’s acknowledge the obvious: these aren’t high-performance cars. If you’re looking at the Camry and Accord, you’re more interested in comfort and space. So how do they stack up?

The 2017 Honda Accord handles itself quite nicely in this category. It’s a best-seller for a reason. The trunk echoes with 15.8 cubic feet of space, and the interior is spacious and comfy. No matter how you slice it – the coupe or the sedan – the Accord’s interior is definitely sufficient. You may find the seats are bolstered a little extra, reducing hip space ever so slightly, but it’s fine for most people.

The Camry holds its own here. The trunk is a teeny bit smaller than the Accord, but it’s hardly noticeable. You won’t miss the .4 cubic feet of cargo space. The interior is nearly identical in volume to the Accord, however minute differences are present. The Camry has a bit more hip space and the higher trim levels have more headroom in the Camry than the Accord.

If you have to pick a winner, the Camry would be it. It’s more suited to everyone, although the Accord is right on its heels.

The Thrill Of The Drive

Both the Accord and Camry have three engine options: 4-cylinder, 6-cylinder, and hybrid. The Camry comes standard with the 178-horsepower four-banger on all trims. The XLE and XSE offer an optional 268-hp V-6. The hybrid trims get the 200-horsepower gasoline-electric hybrid powertrain. The Accord is almost the same: nearly all trims get the 185-hp 4-cylinder (add 4 ponies to the Sport trims) while the Touring and the EX-L V-6 models get the 278-hp six-cylinder. There’s a similar gasoline-electric hybrid model. 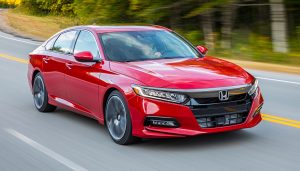 There’s one major mechanical difference to consider when you are choosing between the Toyota Camry or Honda Accord: a manual gearbox. Only the Accord has the stick-shift option, available in the LX, EX, and Sport trims. And if you want an even sportier option, the Accord Coupe can also pair the V-6 with a six-speed manual!

But it will come as no surprise that most buyers, whether they select a Toyota Camry or Honda Accord, will choose an automatic transmission. Performance is virtually a dead heat. No clear winner here.

It used to be that a manual transmission equated to the best fuel economy. That’s no longer the case. Modern automatic and CVT transmissions achieve better fuel efficiency than manual. Otherwise, the Accord would be the decisive victor in the category.

But surprisingly, the slightly more powerful Accord still surpasses the Camry in fuel efficiency. The 4-cylinder model Accord gets 26mpg city/34mpg highway/29 combined and the V-6 gets 21/33/25 respectively. Pretty impressive, actually. The Camry 4-cylinder gets an EPA-estimated 24/33/27 in the same categories, while the V-6 XLE and XSE weighs in at 21/30/24. The hybrid Accord beats the hybrid Camry in fuel efficiency, with much better numbers than their purely gas-powered siblings.

Because fuel efficiency is a major factor in cost of ownership, the 2017 Honda Accord clearly takes top spot in this area.

Either model provides a mind-numbing supply of safety, comfort and convenience features. The 2017 Camrys all come standard with their Star Safety System that includes electronic brake-force distribution, enhanced vehicle stability control, brake assist, traction control, smart-stop technology, and more. The 2017 Accord has much the same standard equipment including a multi-angle rearview camera, and all trims except the LX come with LED lighting. On both cars, some active safety features are optional like CMBS (Collision Mitigating Braking System) and RDM (Road Departure Mitigation). With either car, you aren’t compromising safety.

Both have great audio system choices with standard-equipment Bluetooth HandsFreeLink and Streaming Audio on all trims. Only top-end trims on both sides of the coin have optional Navigation. One stand-out feature is Camry’s Qi-compatible wireless charging. While it may seem gimmicky, it eliminates the need for a phone charging cord that’s always missing or broken.

Which Do You Choose – Toyota Camry or Honda Accord?

Really, there’s no bad choice, and it’s going to come down to your preferences. Each does a few things extremely well although neither has major shortcomings that should preclude it from your consideration. Take the 2017 Accord sedan or coupe if you like it a little more sporty, or take the 2017 Toyota Camry if comfort and space is more to your liking.

Like Jack and Bill in the old folks’ home, there are two definite camps. One thing is certain: with both the Accord and the Camry, the cars no longer appeal only to seniors.