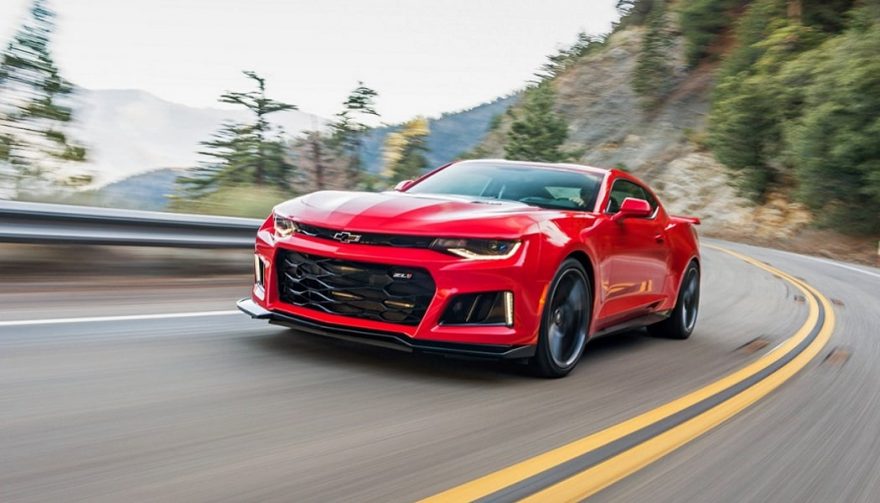 Chevrolet Surprises Everyone With the New Camaro ZL1

Some things in life are always certain: the government will always want taxes, eating too many doughnuts will make you fat, and the Corvette is always better than the Camaro. On that last one, it seems like maybe Chevrolet is shaking things up with the new Camaro ZL1.

Yeah, the Camaro is no longer living in Corvette’s shadow. Just breathe, because it’s going to be all right, I promise.

Just a few days ago, Chevrolet dropped a bomb. We already knew the new Camaro ZL1 is fast. But the company revealed that it can get at least close to, if not exceed, 200 mph. It’s a truly shocking realization, because that’s faster than the C7 Corvette ZO6, which supposedly was a big no-no to exceed.

The Camaro ZL1 threw down some impressive top speeds at the Papenburg High Speed Oval. It’s a popular proving ground, because you can get cars going really fast without worrying about the crashiness of the Nurburgring.

Chevy says it ran the top speed tests in both directions, because wind plays a factor. Going one way, the car reached 193.3 mph. In the other direction, it hit 202.3 mph. Engineers averaged those speeds, saying the ZL1 can hit 198 mph if there’s no wind. You can say it’s a 200-mph car, because it basically is.

There was no sly trickery in these tests. Some automakers (cough, cough, Honda) will strip down cars for lap records and such. Chevy didn’t yank any seats, trim, anything from the ZL1.

In fact, it used the factory tires, Goodyear Eagle F1 Supercar 3s, to be exact. Engineers inflated the tires to 44 psi, which is the setting Chevy recommends if you’re going to drive fast on a track. So, you could technically do the same thing.

A few modifications were on the Camaro. They were all track safety equipment, or data logging tech. That’s it.

Don’t think hitting 200 mph in the Camaro ZL1 will be easy. Papenburg is a unique track. The straightaways are 2.5 miles long. Both turns feature a 49.7-degree grade, if you’re in the top lane. Drivers can go full-out on the bends, something you really shouldn’t do on most tracks.

This is why automakers like Papenburg for high-speed testing.

To be honest, about the only legit place in the United States where you could really put the Camaro ZL1 to the test is the Bonneville Salt Flats. They’re right in my backyard, but going that fast on the flats is a little crazy. I hope someone with less sense than me does it and proves Chevy isn’t fudging the data.

Chevrolet engineers didn’t just stop toying with the ZL1 once it reached an average 198 mph. They started modding it, not a lot, mind you. One successful method was to set the front and rear camber to 0 degrees. Then they filled the tires to the maximum pressure for the sidewalls, because having them burst at 180 mph would be bad.

Those small measures worked, because the Camaro ZL1 averaged over 200 mph.

Grounded to the Ground

Many people think aero elements on cars are ridiculous or unnecessary. I’ll blame the tuner movement from 15 years ago. Admittedly, those humongous aluminum rear wings were… ridiculous. Thankfully automotive engineers don’t pay attention to such foolishness.

To say the Chevy Camaro ZL1 is grounded to the ground probably isn’t inaccurate. Engineers slapped some special parts on it. The goal was to balance the front-to-rear aero, making the car stable at high speeds.

The Camaro engineering team went with a stanchion rear spoiler, instead of a blade-style spoiler, because it produces an ideal lift-to-drag ratio. The transmission oil cooler cover is patent-pending, because it doesn’t produce extra drag, but actually cuts down on front-end lift. That’s mind-blowing, showing just how much thought has gone into the ZL1.

Instead of just slapping a crazy supercharger on a small block V-8, plus a big rear wing and charging a small fortune for these things, Chevrolet seems to have crafted the design. There’s passion here, and that’s awesome to see.

Chevrolet released even more staggering info about the Camaro ZL1’s performance. Prepare to drool more, because it can do 0 to 60 in 3.5 seconds. Remember this is a Camaro, not a Corvette, okay? It can also do the quarter mile in 11.4 seconds at 127 mph.

To say it whips through turns isn’t hyperbole. The car pulls 1.02g while cornering. I’m no doctor, but I’m pretty sure nobody with a heart condition should be doing that. Stopping performance is excellent, too, with a 60 to 0 braking distance of 107 feet.

In case you didn’t hear before, the Camaro ZL1 uses GM’s awesome LT4 small block V-8, with a supercharger. Peak output is 650 horsepower. The standard transmission is a proper 6-speed manual, with Active Rev Match included. If you’re afraid of shifting, which in my opinion means you don’t deserve the ZL1, there’s also a 10-speed automatic transmission that I suppose shifts faster, but whatever.

This hot Camaro will set you back $63,435 for the coupe, or $65, 830 if you want the automatic tranny. Those prices include destination and the obligatory gas guzzle tax of $2,100.

Will dealerships try to gouge on this car? Probably. Will it be worth the cost anyway? That’s a question for your accountant. I just say drive the damn thing.

Before you start glowing about how GM is the best because the Camaro ZL1 is the best car ever, let me bring you back down to earth. The fact is this new Camaro is facing some stiff competition. Sure, it knocked off the ZO6 for the fastest production Chevy on the market. But the new ZR1 is coming, and I don’t think the ZL1 stands a chance. Just remember the old ZR1 could hit 205 mph.

Then there’s the Dodge Challenger Hellcat and Demon. The former  can go over 200 mph. We’ll find out soon enough how fast the Demon is, but expect it to be well in excess of 200 mph.

The new Camaro ZL1 is fast, but we’re living in a time of fast cars.