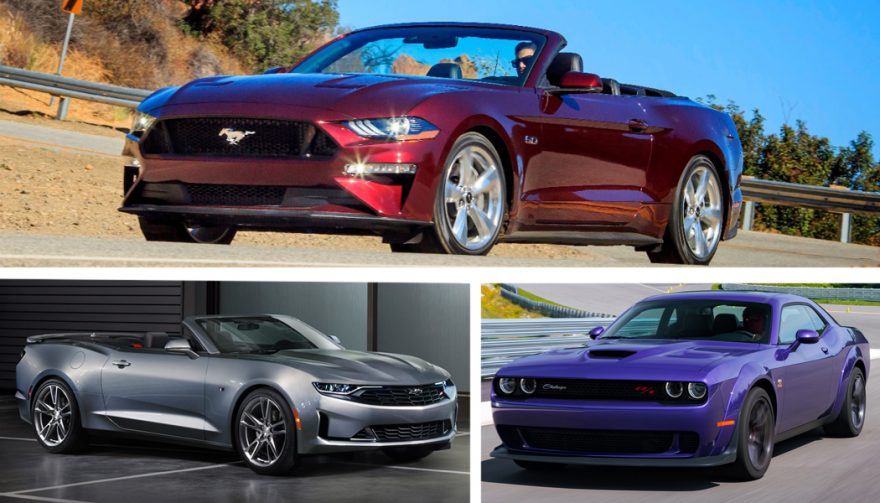 Cheap power and torque are the hallmarks of the Dodge Challenger, the Chevrolet Camaro, and the 2019 Ford Mustang GT Convertible. Here's how they stack up

﻿2019 Ford Mustang GT: How it Stacks Up Against Dodge Challenger and Chevrolet Camaro

If the idea of cheap power, torque, and motoring pleasure get you salivating on overtime, and if you want a really fast car without severing an appendage to pay for it, then three machines are likely on your mind: the Dodge Challenger, the Chevrolet Camaro, and the 2019 Ford Mustang GT Convertible.

Each of these machines gives you the better part of 500 horsepower and no shortage of motoring thrills. For maximum performance bang for the buck, and an all-American dose of firepower, these three modern-day rockets are virtually without rival.

But which one is the best?

There’s no such thing. Each of these machines has strengths and weaknesses that will play for, or against, the shopper in this segment. It’s all up to your own personal tastes.

Which one would I spend my own dollars on? That’s easy: the Mustang. And I’m a card-carrying Dodge fanatic (and two-time Viper owner who has a great big soft spot for the Challenger).

Below, a little highlight on how each of these machines stacks up to the rest in several key areas. The comments here come from no less than 14 days and 2,500 kilometres at the wheel in each of the mentioned models over the past 1 to 2 years.

Read on for some comparison between each of these models, and specifics on why this writer would pick the Mustang every time.

First, the feel. I find the 2019 Ford Mustang GT feels the most athletic. It’s got the most precise brake-pedal feel of the three, the steering is a measure more quick and eager and mischievous than the Camaro or Challenger, and in simple terms, Mustang feels more eager to please, more of the time. What you experience, at the tips of your fingers and toes, is a more fine-tuned and precise feel. It’s not a big difference between each of these rides, but it’s there. If you’re looking for it.

All said, it feels like the engineers put in extra attention to how Mustang feels when it responds to your requests. And, if you still live in Narnia and think American cars can’t handle, steer or brake, you need to give one (or all) of these a test drive.

Honorable mention to the Camaro, for its Magnetic Ride Control suspension. This technology allows the chassis to finely control ride quality and body motions in real time, turning in an often-smoother ride, with no hit to handling.

Also, Challenger may be more your style if you’re less about precision and more about grabbing things by the scruff. It’s a less-precise, more brutish feel, at times. If you pick the rocket launcher instead of the sniper rifle in Call of Duty, the Challenger might be the best pick for you.

Still, this writer finds the Mustang to feel like the group’s most expertly dialled-in driver’s car.

You May Also Enjoy:
Ponies in the Pictures: Top 5 Mustang Movies

Next? The Mustang has the best cabin in the game, for several specific reasons.

Key among them? You can see out of it.

The windows are taller, the dash is lower, and you can see to the edge of the hood. You’re surrounded by plenty of glass in the Mustang, which means you’re more at ease, more of the time, while driving—since you’re better aware of what’s going on around you.

In Challenger, you sit deeper in the car, the dash and door panels come up to collarbone height, and there’s less glass. It’s more like sitting in a deep hole. The Camaro is even worse—the instrument cluster has a useless cowl that sits at nose height, blocking more of the forward view. Your average-sized writer can’t even hang his arm out of the Camaro’s window. Since the door panel rests at neck height.

The 2019 Ford Mustang GT cabin also looks the most high-tech—which we can assume is important in 2019. The sole fully-digital instrument cluster in the group will likely become your new favorite gadget, since its customizable to the finest detail, and has excellent graphics.

The unique blend of materials, colors, textures, and signature toggle-switches elsewhere on board make it the most character-rich, cohesive-looking cabin in the group.

The Camaro’s cabin is simpler and tidier looking—less distracting—and some shoppers like that. The Challenger, depending on the model grade, makes better use of better materials, for a more high-end feel and appearance. Still, all in all, as a package, you’ll likely agree that Mustang has the most good stuff going on.

Just note, Mustang’s rear seats are useless for occupants with legs, entry and exit are the tightest of the group, and the cabin ‘feels’ smaller than the Camaro and Challenger. Not cramped per se, but given the size of the car, some will expect the cabin to feel more expansive.

If you regularly travel with more than one passenger, or if you’re a larger or mobility-challenged driver, the Challenger could be a better pick: it’s the easiest to board and exit, and has the only adult-usable rear seats here. They’re not spacious, but they don’t require passengers to chew their own knees, either.

Finally? The 2019 Ford Mustang GT has the best engine in the group if we consider that, as a performance car, the engine is a big part of the ‘performance’—or the show the car puts on for its driver.

Camaro and Challenger have big-power V8’s of 6.2 and 6.4 litres, respectively. These simple and highly-effective powerplants have mountains of low-end torque and sound like fourth-of-July fireworks. Both have performance that will make your church-going Grandmother drop an F-Bomb. Both can be had with either manual or automatic transmissions.

Though the bigger GM and Dodge powerplants blow it out of the water on torque output, the Mustang’s 460-horsepower unit has a unique trick up its sleeve: it revs to the moon.

After all, there are various ways to make an engine powerful. One is to make it bigger. Another is to make it spin faster. That’s what Ford’s done.

In exchange for some low-end torque, drivers are presented with the gift of revs: in this case, thanks to an exotic 7,400 RPM redline enabled, in part, by the so-called Coyote V8’s trick overhead cam and valve timing setup.

At the sort of revs where the Camaro and Challenger have run out of steam, the Mustang is entering full song: the power curve swells and builds in a peaky wave, and the sound effects of rapidly-reciprocating, free-breathing V8 are not to be missed. Simply, the very ‘feel’ of opening up this engine is a total riot—once you’ve got a few revs on the tachometer to get things started.

You pick the car you pick for various reasons. And where performance cars are concerned, these sound like pretty good ones to me.