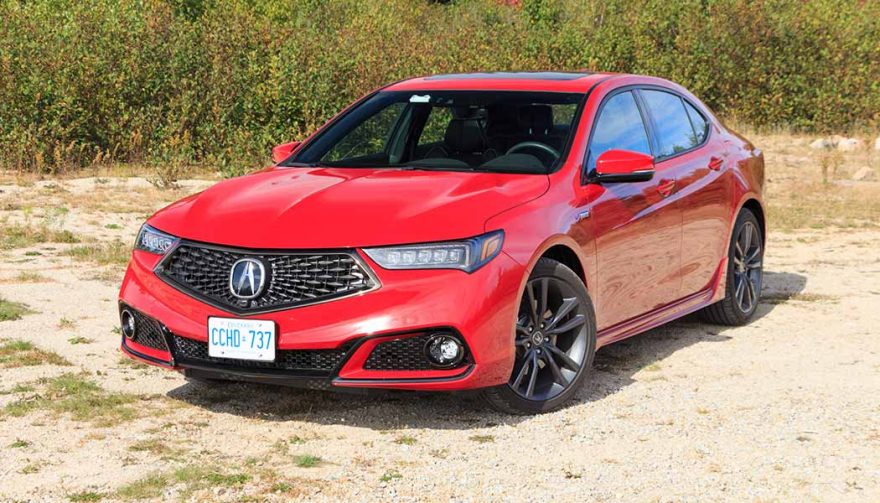 The Acura TLX A-Spec gets a 3.5-liter V6 that generates 290 horsepower

Does a Facelift and A-Spec Trim Make Acura’s TLX a Sport Sedan?

The more time I spend in the Acura TLX A-Spec, the more it feels like I’m actually at the helm of a boat. Hold on a second, I don’t mean like that. It’s a far cry from the wallowing land yacht that the boat descriptor implies. But I’ll get back to that in a minute.

The Acura TLX has been around since 2015, when it debuted as a replacement for both the TL and the TSX sedans. For 2018, it got a well-needed refresh that dropped Acura’s controversial chrome “beak” grille in favor of the new Superman-shield. A new top sport trim was also added, the A-Spec.

So back to that boat feeling. The Acura TLX A-Spec is far from being a floaty car. The stiffer springs, bigger rear sway bar, and revised dampers make sure of that. The 245/40R19 Michelin tires especially lend a sharp edge to the ride of this car that makes me long for the days when tires had some sidewall. Or the days when potholes were fixed in a timely manner.

But sit behind the wheel – and with the A-Spec’s quicker steering rack, you would be hard-pressed to call the responsive steering a helm – and you’ll start to see what I mean.

The TLX’s prominent hood creases dive toward the front and center of the car. Like the prow of a powerboat. They dominate your view forward. And since they don’t actually approach the sides of the car they make the car feel much wider than it is.

Even the exterior calls to a fast boat. From behind the wheel, it has an extremely long hood and a low trunk lid. The trunk isn’t lower than the hood, but it feels like it is when you’re inside the car. It doesn’t look that way from outside, but it’s an interesting trick of perspective from in the car. 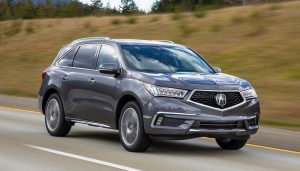 The exhaust sounds muffled. The 3.5-liter V6 generates 290 horsepower and an amazing sound, but the exhaust note sounds like it’s coming from underwater. Like a big burbling V8 mounted inboard in a powerful boat. The A-Spec’s twin 4.0-inch pipes make the V6 sound like a more powerful engine, and it’s not exactly quiet at full throttle, but it still always sounds like the pipes are underwater.

Accelerate hard in the TLX and, like a large, powerful boat, it feels like it is pushing through something thicker than air. It’s not slow to accelerate. Far from it. But the way it sends power through the all-wheel drive system gives the feeling of the nose raising and the car plowing through something more viscous than the atmosphere.

Acura TLX A-Spec on the Road

On the highway, the TLX still feels like it is pushing through water. Like you need to use more power than you would expect to. Almost like driving in deep snow. Lift off the throttle, and it slows more quickly than most automatic-equipped cars would.

The quick ratio steering lends a degree of twitchiness on the highway too. The car feels like it is tacking back and forth across the lane, and even with Acura’s Lane Keep Assist, you need to keep a constant hand on the wheel.

But get off the highway, and the TLX becomes a more willing partner. Throw the car into turns and the faster steering gives you wonderfully sharp turn-in. The steering heft builds nicely with speed and with cornering force, and it’s very reassuring in bends. The massively thick steering wheel of the A-Spec is almost too thick for cruising but feels wonderful in your hands when you’re twisting it back and forth into bends.

Acura’s Super Handling All-Wheel Drive sends power to the wheel with grip, but it will also send it to the right rear wheel to help you get out of corners harder and faster, and with less understeer. On the highway and in town, the TLX feels big and wide and heavy. Which isn’t a bad thing in a luxury cruiser. On a back road, it shows that it weighs well under 4,000 pounds, which is actually fairly light for a car like this. 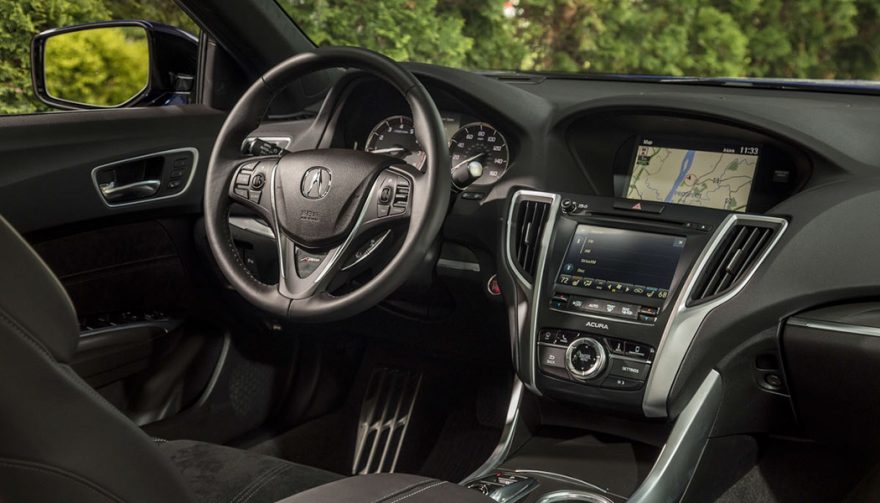 Inside, the interior is the same as last year. The A-Spec trim gets a set of supremely comfortable front seats, with huge (but not tight) bolsters. They’re some of the most supportive seats I’ve had the pleasure of sitting in this year, and the Alcantara inserts look and feel amazing. The door trim uses the same material, and it adds a premium touch to the car that makes it feel above its price range.

Unfortunately, the infotainment system and the dash let the side down. The TLX’s two-screen navigation and climate control system looks like it came straight out of last year’s Honda Accord. Which it largely did. Acura also likes to hide controls – like the ones for the seat heat and ventilation – in on-screen menus. That makes them more unintuitive to operate, taking your eyes off the road while you make adjustments. The new TLX drops the automatic shifter for a push-button system. That frees up some cabin space, and the buttons are simple and easy to use.

The front seat is an extremely comfortable place to be. Not so much in the back. It’s a great place for passengers that are sub six-foot, but taller riders need not apply. The trunk is long but is also short and narrow. That limits the amount of cargo that can fit back there.

If you’re looking for a nice Accord, this will deliver. But if you’re looking for a comfortable and quick sports sedan that is fun to drive, the Acura TLX A-Spec will pleasantly surprise you. It might not be the fastest or the fanciest, but it strikes an excellent combination of value for performance. Which is what Acura has offered since day one. The Acura TLX A-Spec is a boat. But it’s the good kind of boat. The corner carving, comfortable kind.