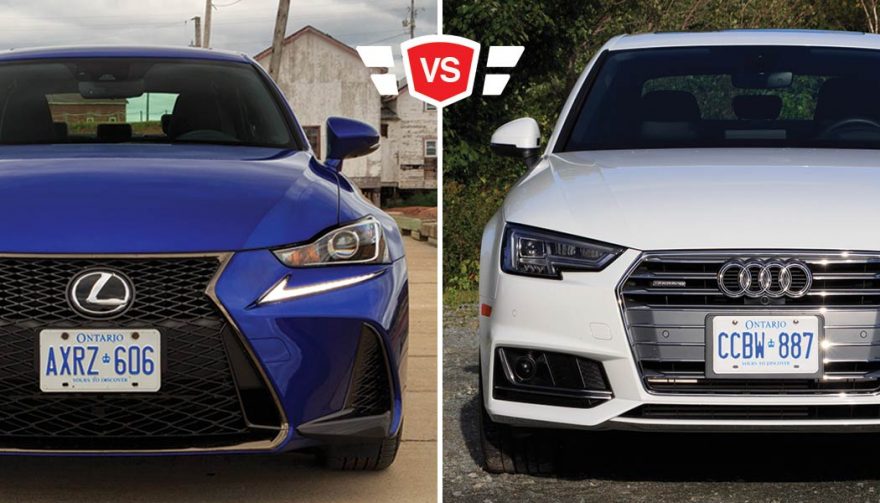 Audi A4 vs Lexus IS350: Luxury Sports Sedan Showdown

Let’s look at the Audi A4 vs Lexus IS350 head-to-head match up. One is a brash, over-styled, look-at-me cruiser. The other is a classic, understated, Teutonic chunk of granite.

But they’re both all-wheel drive sedans with trick dashboard displays that are competing for your compact luxury sports sedan dollar. You’re not going to go wrong with either ride, but depending on what you’re looking for, one will definitely appeal to you more than the other. 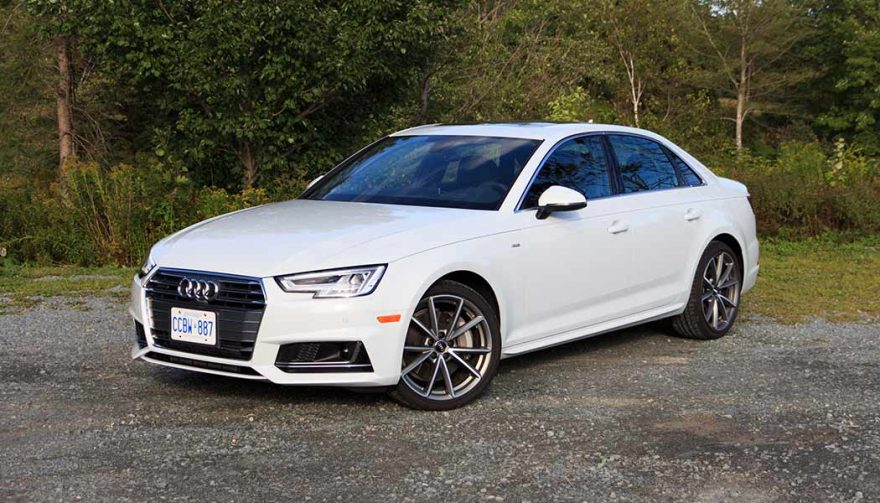 The Audi A4 got a big redesign for 2017. It’s a new chassis, a new body and an updated engine. You’ll be forgiven if you have a hard time spotting the differences between old and new, but look at them together and it gets a little more clear.

The new A4 is sharper, almost angrier looking in the nose. That leads to a crisper body line running back to the taillights and that sharper look extends to the rear end as well. Those new taillights get a trick sequential function that lights them up in the direction you’re turning. Like a Mustang’s, but cooler.

The cabin has the high-quality, carved-from-stone, ultra-modern look that you expect from Audi. The brand is consistently delivering some of the best (and most simple) cabins in the industry. The switches and gauges are all simple and clean, and easy to read and use. The aluminum-look trim for the dash is even actual aluminum. The driver’s airbag is one of the smallest around, and it’s nice to see a wheel center that small on a modern car. 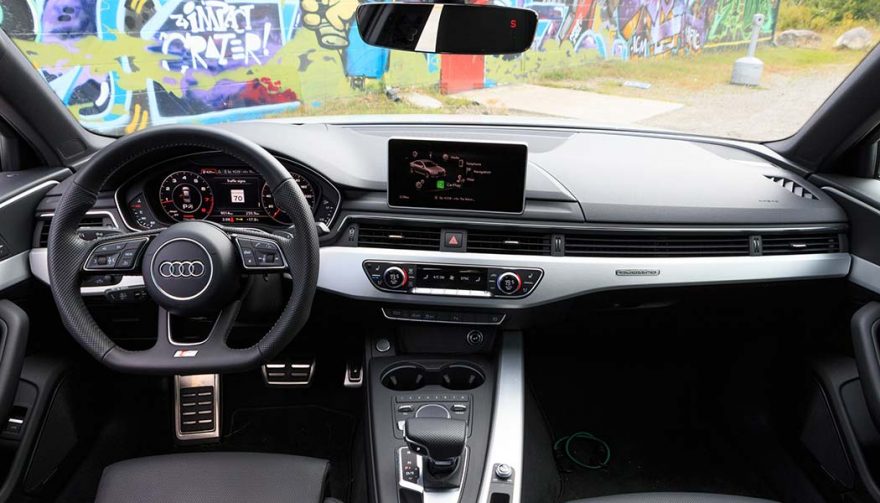 The 7.0-inch infotainment screen can look a bit tacked on, but that look is common around the industry, and it usually looks better than the massive dash needed for an integrated screen.

Audi’s MMI infotainment system is controlled by a large knob that doubles as a touch pad. It’s flanked by menu buttons that are shortcuts to the main functions. Wait until dark, and the cabin lights can be set to multiple colors, although it’s easy to end up with mismatched lights that look a little odd.

Under the hood is a 2.0-liter turbocharged four-cylinder. The engine makes 252 horsepower and 273 lb-ft of torque. That torque comes on at just 1,600 rpm, making the A4 seem more powerful than the raw numbers suggest.

Unlike the Lexus, Audi lets you do it yourself and offers a six-speed manual on all trims. My test car had the seven-speed dual-clutch box.

The A4 is also available in an Ultra trim that drops power to 190 horsepower to save fuel. That model is front-drive only, but the full-fat cars are all all-wheel drive.

The A4 is a surprisingly quiet car. So much so that you should probably keep an eye on the speedometer, because your ear won’t tell you how fast you’re going. You will still hear that engine when you prod the throttle, though. 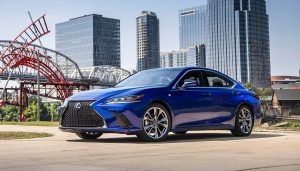 The steering adjusts from extra light to not-quite stiff enough, depending on what mode you have the controller set to. The adaptive dampers do a good job of soaking up the less-than-perfect pavement of my local roads, but are firm enough for a run through the hills when in dynamic mode. 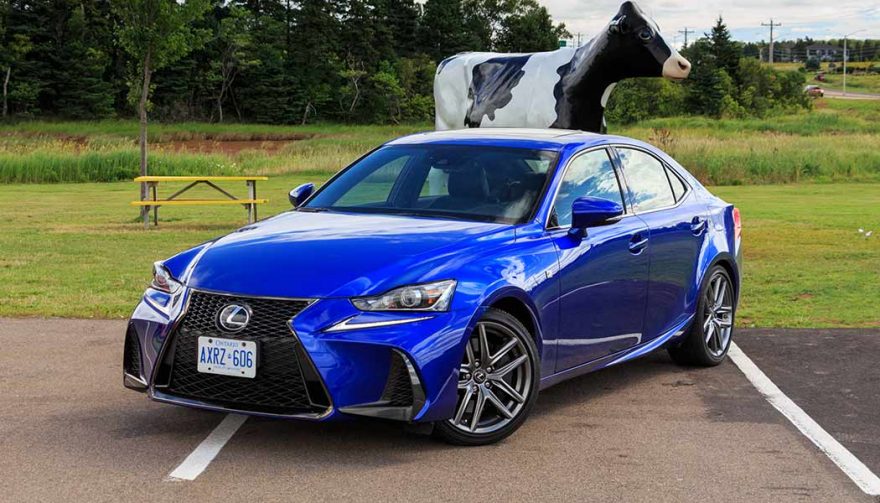 The Lexus IS has been around for a few more years than the Audi A4, but it has aged well. The styling is loud, but still tasteful. It’s one of those cars that looks like it’s going fast even when it’s standing still. The Lexus spindle grille doesn’t always work, but it does on this car. From most angles, at least.

The F-Sport package adds big air intakes, black wheels and a mesh grille instead of bars. It looks like it should be paired with the RS4 instead of the A4, but for A4 money. Even without the F-Sport pack, the IS is the looker of the Audi A4 vs Lexus IS350 match up.

The IS has a more traditional luxury feel than the Audi. It’s a very wide, very high center stack with lots of leather, analogue clock and brushed-metal-look trim. The big steering wheel and pointy shift paddles make it feel like an event every time you climb into the driver’s seat. 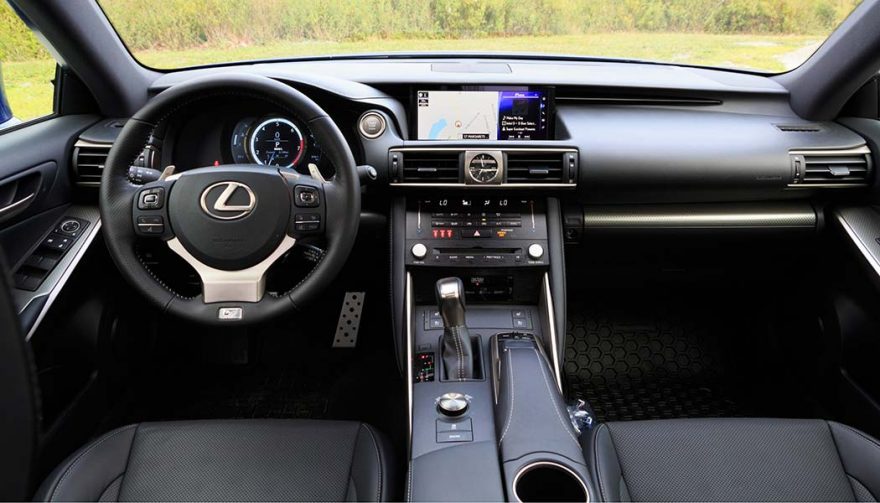 There are some misses in the design though. That wide console doesn’t make it a good car for tall people (although the padded sides are a nice touch), and the cup holders share a space with the passenger’s elbow. The infotainment system is operated via a joystick knob with haptic feedback. It’s not as smooth as Audi’s system, and the interface shows its age.

A 3.5-liter V6 worth 307 horsepower propels the Lexus IS. It makes power at almost every engine speed, and it moves the IS around very well with a nice surge toward redline. The gearbox is a six-speed auto that is slightly slower than the Audi’s DCT. It’s smoother though, so the trade-off is going to depend on what you want in your sports sedan.

The IS can be had in rear drive (and with smaller engines, too) but my tester was the AWD model. It makes for a composed ride, regardless of conditions. Just don’t expect to hang the tail out.

If you’re looking for a ride that gives you more power and sportier handling over something a little more sensible, then both of these deliver. If you want bold looks to go with it, then the Lexus IS is for you.

The pair are equally luxurious, but in different ways. The IS is showing its age in the interior design and infotainment though. And the IS’s LFA-style sliding gauge pod is cool until you see the A4’s virtual cockpit 12.3-inch screen.

If you’re looking for an audio experience, neither of these has an exhaust that will really thrill you. But they do offer some amazing stereos. Lexus will give you a 10-speaker Mark Levinson system, and Audi offers a Bang & Olufsen stereo with 19 speakers. Both will give your ear a well-deserved treat.

These cars both have good space in the front seat, although the lower roof of the IS can be tight for taller drivers. The cabin of the IS feels a little narrow as well. They’re comfortable for rear seat passengers, but if you’re looking to put six-footers back there, look elsewhere.

The A4 wins for it’s sleek, modern interior. The IS for exterior styling. The IS takes the win for me, with the look-at-me styling and V6 beating out the Audi’s extra interior space.