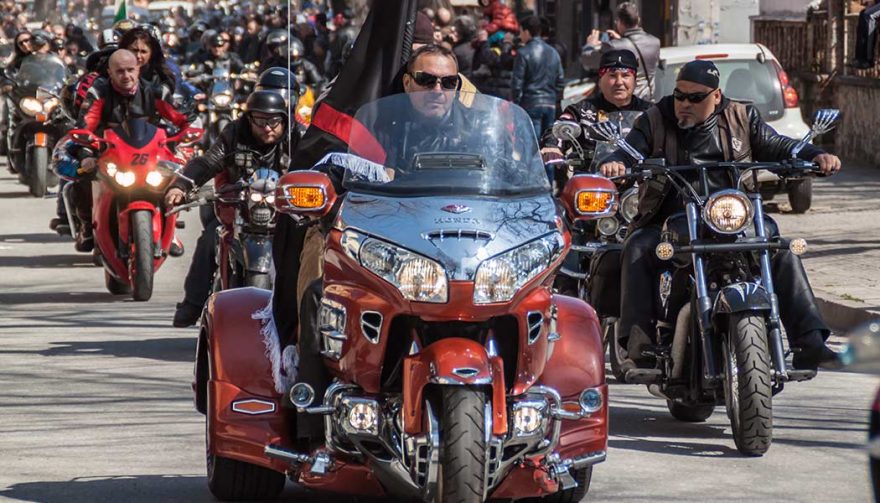 Is this biker trike even a motorcycle?

Are They Really Motorcycles? The Biker Trike Culture War

They come rumbling down the country road 2 by 2 astride their Harley Softails and Street Glides dressed in leather and denim. The combined thunder of their exhausts signals something dark and dangerous coming sending a chill of uncertainty down the spine of any automobile driver that may be sharing the road.

This is the American perception of “bikers.” Bad boys (and girls) who either just got out of jail or who will be in a high speed chase with the cops in the immediate future. Of course a closer look at this gang will reveal they are riding $50,000 bikes and are dressed in $1,000 designer Harley leathers and attire and if you ask them they will tell you they are taking a break from their professional jobs to attend a Harley Fest.

Bikers, weekend warriors and hardcore alike, share a love of “riding” down the road, leaning into curves, feeling the wind and experiencing the freedom that only bikes can provide. There is no question that there is a certain thrill involved and a level of danger that is all part of the experience. Bikers bond together. They form a brotherhood. They always wave to fellow bikers they meet on the road.

So when a guy on a three wheel cycle approaches from the opposite direction, why won’t the bikers wave an acknowledgement to a fellow member of the brotherhood?

To quote Rodney Dangerfield three wheelers “Don’t get no respect” from their 2 wheel counterparts. Three wheelers take turns just like driving a car. They can’t lane straddle because of their width but then they won’t fall over when the rider comes to a stop. But what really lowers the respect of the 2 wheelers is their conviction that 3 wheelers are wusses. They are riders who are afraid of dumping a 2 wheeler on a curve and therefore are not really “bikers.”

Who Made These Things Anyway?

As best as anyone can tell the first three wheel bikes, one wheel in front and two in the back, were custom made by bikers whose years of riding had taken its toll on their bodies. When your joints hurt and the back is giving you a problem, jumping on a 2 wheeler for a road trip loses some of its appeal. However, you can get most of the same experience by customizing your 2 wheeler into a 3 wheeler and give your body a break.

When the choice is easy riding or no riding you do what you have to do. Small indie shops helped the cause by selling bikers “trike kits” to convert their rides for about $15,000. The style caught on and in 2009 trikes were given the official stamp of approval by no less an authority than Harley Davidson who rolled out their first tricycle the Tri Glide ®. With Harley leading the way, other motorcycle manufacturers started exploring the market and the number of trikes on the road increased.

But Are These Things Motorcycles?

Let’s ask the folks who have the definitive say on the status of 3 wheelers; the DMVs across the country and the insurance companies.

Technically any vehicle with fewer than 4 wheels is a motorcycle. In almost every state a 3 wheeler has to obtain a motorcycle license although a few states have separate tests for trikes and amend the motorcycle license to reflect the driver is limited to operating 3 wheelers. In those states that have separate tests almost anyone who has an automobile driver’s license can get a trike license. Trikes are infinitely easier to operate.

Insurance companies recognize the difference between 2 wheels and 3 wheels mostly because 3 wheels represent better risks. Given the same driving record, 2 wheel riders will pay more for liability and medical payments insurance than a three wheeler will. The insurance companies big concern with 3 wheelers is the availability of parts and service should they need to repair the trike. If you own a bike with a custom kit you may find yourself unable to obtain collision for your ride.

And Then Along Came the Autocycle

OK this one should probably not be classified as a motorcycle even though it does have only 3 wheels. Autocycles have created a whole new classification of cycles. These are enclosed vehicles that look like something out of Star Wars. Most are reverse trikes with two wheels up front and one behind. They have bodies made out of fiberglass and carbon fiber materials and sculpted like something out of the future. While most steer by handlebars the trend is moving ever closer to a sports car experience.

Many think the future of this class is defined by the Minnesota built Polaris Slingshot® which can be best described as something else. It’s not a car but it is also definitely not a motorcycle. Check out the features:

For traditional bikers, move over the future is now.

Here’s something else to think about. When your bike breaks down on the side of the road, who is more likely to stop and help you out; the guy in the Mercedes E Class or the old dude riding a 3 wheeler. Maybe you should wave the next time you see one.