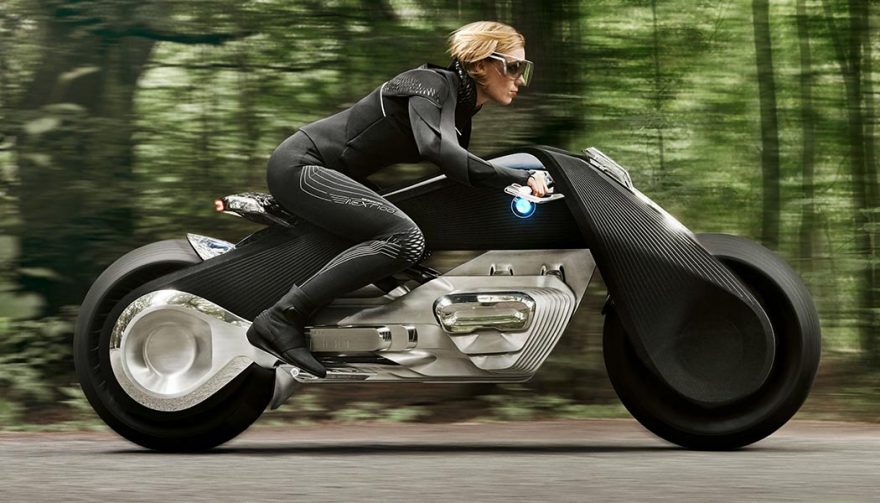 The BMW Motorrad VISION NEXT 100 intelligently connects rider, bike and the outside world.

The BMW Motorrad VISION NEXT 100 is BMW’s vision of biking in a connected world. BMW sees the future of motorcycling as an analog experience in a digital age, calling it “The Great Escape.” More on that later…

The BMW Motorrad VISION NEXT 100 is immediately recognizable as a BMW through its use of various iconic design elements. These include the black frame triangle, white lines and classic, boxer engine forms.

The black frame triangle of the BMW Motorrad VISION NEXT 100 is a reference to the triangular frame of the first BMW motorcycle, the 1923 R32. Here it has been reinterpreted to form a functional sculpture linking the front and rear wheels. The arrangement of surfaces protects the rider from wind and weather as effectively as a full fairing. The surface of the frame is covered in matt black textile. The BMW logo on the dark frame is illuminated in the familiar blue and white colors.

Integrated into the frame above the front wheel is a large metal reflector incorporating the two elements that make up the daytime running light. It also acts as a wind deflector and, in combination with the small, integrated windshield, helps to optimize airflow.

The Flexframe extends from the front to the rear wheel. It allows the bike to be steered without the joints found on current motorcycles. Turning the handlebar adjusts the entire frame, changing the direction of the bike. The amount of strength needed to steer depends on the situation: at low speeds, steering is light; at higher speeds it becomes very rigid.

In the middle of the triangle frame sits the “power unit,” designed to look like the traditional BMW boxer engine with a polished aluminum finish. Claimed to be “a zero-emissions drive unit,” it is likely electric in the concept. Here’s a neat design gimmick: its appearance changes based on the speed of the bike. When it is resting, the “cooling fins” are retracted. When the bike sets off, they extend outwards to enhance aerodynamics and protect the rider from the elements.

Body elements including the seat, upper frame cover and wings are made of carbon fiber. Beneath the seat shell, two fine, red, illuminated strips form the rear light and indicators. Damping is provided by the tires, whose variable tread actively adjusts to suit ground conditions and ensure the best possible grip in any situation. No shock absorbers necessary in the future!

The BMW Motorrad VISION NEXT 100 has been almost entirely scrubbed of traditional motorcycle-type analog mechanical controls. But one red rocker-switch on the right-hand end of the handlebar remains. Its function is to block or releases the throttle grip. This and the hand levers with their outward-facing joints are a last reminder of the analog days of original biking.

BMW Motorrad VISION NEXT 100 Is Connected

Intelligent connectivity between rider, bike and the outside world allows the prediction of critical situations on the roads. In conjunction with the active assistance systems, these connected elements help keep riders of the BMW Motorrad VISION NEXT 100 in complete control. As well as anticipating what lies ahead and alerting the user when action is needed, they offer active rider protection and make helmets and other protective clothing obsolete.

The active assistance systems enhance stability and safety by automatically balancing the motorcycle. Novice riders benefit from a bike that will never tip over. The BMW Motorrad VISION NEXT 100 rights itself while even stationary. It remains upright when the rider has dismounted. The balancing systems also work out on the road to ensure a particularly agile and dynamic riding experience.

Information exchanges between rider and bike take place via the visor. This essentially consists of a pair of data glasses that covers the wearer’s entire field of vision. As well as providing wind protection, it shows relevant data in four designated display areas. These are controlled by the rider’s eye movements: looking up or down changes the content that appears, and looking straight ahead switches the information off completely. Information is only projected onto the visor on request, or to alert the rider to the fact that action is needed.

Using this system, the bike can suggest ideal lines and banking angles, or warn riders of hazards ahead, If the bike’s current position does not match what is suggested, the rider can correct it as necessary. If he or she responds too late or not at all, the bike will correct itself.

Looking upwards activates the rear-view function in the visor, allowing the rider to see what is happening on the road behind. Lowering the eyes to normal levels opens a menu from which the rider can select an option by pointing a finger. Looking further down opens the map view showing the rider’s chosen route.

Even The Rider’s Gear Is Connected!

The rider’s gear accompanying the BMW Motorrad VISION NEXT 100 is integral to the experience. Depending on conditions, it warms or cools the user. The flexible, banded structure of the suit and shoes is inspired by the muscle areas of the human body and provides body support and relief whenever needed.

At higher speeds, the neck section inflates to provide extra support for the upper vertebrae and improve overall comfort. Variable openings offer additional ventilation. Unlike present-day suits, however, the futuristic outfit offers no safety features, because the bike’s intelligent assistance systems make them unnecessary. Instead, sensors in the suit keep track of the wearer’s pulse rate and body temperature and provide the right level of heat or cold. The suit also delivers navigation instructions via the vibrating elements in the arms and legs, and alerts the rider when the banking angle is becoming critical. Rider and machine form a single functional unit.

As with most concept vehicles, this is a fine way to generate excitement for the current and near-future product lines. Aside from the electric power plant and some of the connectivity features, little of what you see here will reach production. Perhaps we will see this bike in an upcoming sci-fi movie…

It is also fair to wonder whether BMW’s calling this bike “The Great Escape” was done with any awareness of Steve McQueen’s iconic attempt to escape his WWII German captors on a motorcycle in the 1963 film of the same name. Ironically, McQueen actually rode a Triumph TT Special 650 in the film. It was disguised to look like a BMW military bike, and was used when the actual BMW bikes could not take the punishment of being repeatedly jumped over the 6-foot high barbed wire fences!