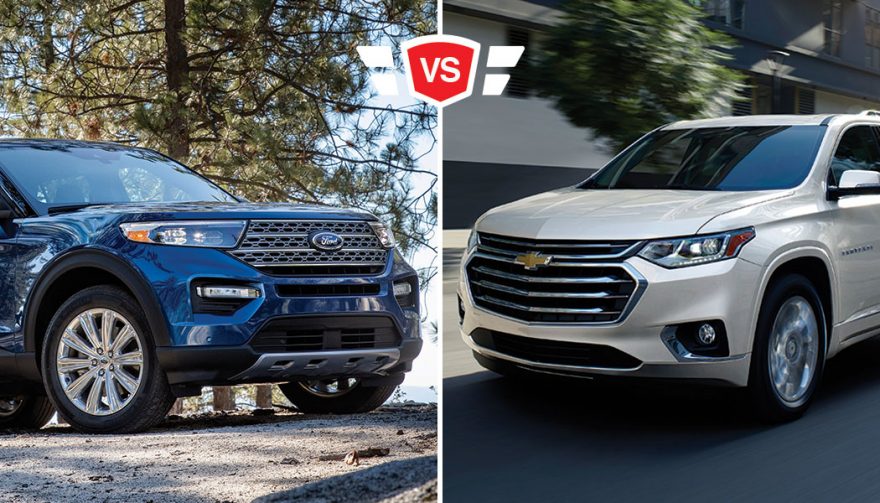 Which is the most capable midsize SUV - the Traverse on the left or Explorer on the right?

Who will win the bragging rights in this midsize SUV showdown with the Chevrolet Traverse vs Ford Explorer? Who has the upper hand in technology, safety, capability and looks?

This rivalry has been in full effect for decades. It’s a daily battle with one side trying to one-up the other at every turn. There’s a western-style shootout between members of their crews, and today’s battle is the Chevy Traverse against the Ford Explorer. As with every good gun fight, this one starts with a stare-down.

The Ford Explorer has an aggressive, sporty look that boasts its capability. It tells you just how much it can achieve from its appearance alone. Whether it’s the blacked-out “Sport Appearance” grille or the standard chrome, it’s like the dressed-up cowboy with bling on his saddle. It’s hot stuff and it wants you to know it.

The Chevrolet Traverse is much less aggressive. It dons a friendlier look, almost a grin, like it’s going to smother you with kindness. It claims to be a midsize SUV but comes across as a minivan. And while aggression isn’t its primary motif, the Traverse is packing some serious heat in other places.

It’s What’s on the Inside That Counts

The two vehicles are totally different on the inside. The Chevrolet Traverse is built for the passengers, that’s clear to see. Comfortable seating is much like a passenger car or even a minivan, and that goes for all three rows.

It’s roomy, and even smaller passengers could find the third-row seat comfortable for short trips. It’s built for three people in cramped quarters, but two could be comfy.

And yes, that means there’s seating for eight in the Traverse. The Ford Explorer has a similar design with a two-passenger third row for a total capacity of seven people, but it’s seldom going to be used.

Cargo space, on the other hand, is markedly different. With all the rear seats folded down, the Ford Explorer has a sufficient 81.7 cubit feet of cargo space. The Traverse, has a maximum cargo capacity of 116.3 cubit feet behind the front seats, which is also best in class.

The Ford Explorer feels more rugged on the interior, closer aligned to the true SUV feel. While not as truck-like as it was in the past, the Explorer’s seating is more upright than a passenger car.

Does that make a difference? In a segment that rarely – if ever – sees anything but paved roads, probably not.

More than ever, it’s the technology that sets vehicles apart. The Ford Explorer and Chevrolet Traverse are very similar in that regard, both containing great basics.

There are a few differences of note, mainly in available high-end trims:

Don’t misunderstand – both the Chevrolet Traverse and Ford Explorer are extremely well-equipped vehicles. Each has an advantage here or there, and the high-end Explorer edges out the Traverse in available features. Standard equipment is virtually neck and neck.

How the Performance Factors In

It’s an SUV, which means it has to be capable. Previous generations of the Ford Explorer would have walked away with this category due to the true 4WD option with primary rear-wheel drive function. Since it’s a front-wheel drive vehicle with rear wheel assist, it’s a much closer comparison.

The Ford Explorer has three engine options: a 3.5-liter naturally-aspirated V6, a turbocharged 2.3-liter EcoBoost inline-4, and a twin-turbo 3.5-liter V6. The minimum horsepower is 280 on the smaller EcoBoost engine while the tops is obviously the twin-turbo V6 with 365 ponies. You can feel the difference in the seat of your pants, undoubtedly.

The Traverse has just one engine option, the 3.6-liter V6 engine with either 281 hp or 288 hp if you get dual exhaust. It would be great to see another engine option, although higher horsepower doesn’t really seem to fit its personality. Perhaps a Toyota-style hybrid SUV powertrain? Aside from the lack of options, the Traverse performs exceptionally well.

Does the SUV you buy need to have more than 300 hp? Will you use it? Probably not. And do you need true 4WD capabilities? It’s extremely unlikely you’ll ever need more than the occasional rear-wheel assist, so no.

As performance goes, you won’t find much difference between the two, unless you look at the twin-turbo EcoBoost Explorer.

As Always, an Emphasis on Safety

You don’t go anywhere these days without asking about safety. A “shootout” between two major vehicles is no different.

Undoubtedly, the extra space in the Traverse lends itself to reduced instances of passenger injuries in a collision. Traverse also has an industry-first Front Center Air Bag that deploys in a side collision or rollover, keeping the front occupants from ping-ponging off each other.

The Chevy Traverse has a great assortment of active safety options including Lane Departure Warning, Rear Vision Camera, Rear Park Assist, Front Collision Alert, Side Blind Zone Alert and more. Obviously, OnStar is a huge plus in the safety category as well.

The Ford Explorer does well for itself too. Industry-first rear outboard inflatable safety belts are available, and the Explorer has Enhanced Active Park Assist and a Front 180-degree Camera with Forward Sensing System. The onslaught of active safety systems is available on the higher trims for the Explorer as well.

Who’s Still Standing After the Shootout?

The Chevy Traverse and Ford Explorer is a surprisingly close comparison if you can look past the exterior differences. The brash gunslinger, the Explorer, is taken down by the quiet Traverse when the dust settles.

The biggest advantage is the overwhelming cargo capacity inside. Spec-wise, the battle is almost too close to count. And when it comes to features, the biggest differences are on the less-common top trim levels.

When safety and passenger comfort matters most, the Traverse takes the win in Detroit.