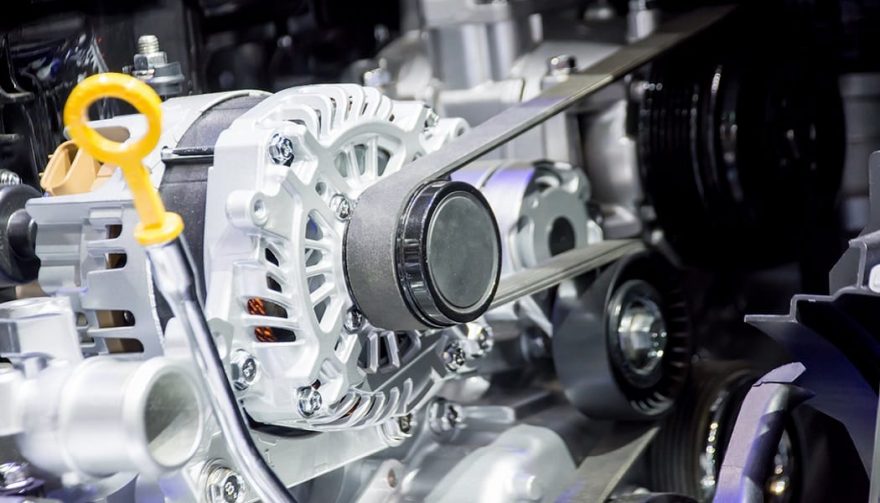 Oh, oh, oh it's magnets (not magic) that make your car work.

Magnets: Your Car Can’t Run Without Them

We normally think that cars run on gasoline. But what if I said that cars run because of magnets, and without magnetism our vehicles would be lifeless, expensive hunks of metal with wheels. It would sound like an outlandish statement and a wild claim. What do magnets have to do with our car’s ability to run?

Even if we accomplished all that, without magnetic fields the ignition coils would not produce a high voltage current to blaze through the spark plugs and ignite the fuel mixture.

Magnets Do Mechanical Work, and Lots of It

The one area of car repair that most people struggle with is the electrical system, because its workings can seem mysterious. To help understand what’s going on with electrical parts, let’s talk about what electricity actually does inside many of your car’s electrical components.

Science has shown us that as electrical current flows through copper wire, it creates a magnetic field which radiates out in all directions. Stop the current and the magnetic field will collapse quite suddenly.

But the field surrounding a single copper wire is weak, too weak to accomplish any work. So, we can wind the wire around a spool, like thread wrapped around a spool or fishing line wrapped around a reel. That will concentrate the magnetic field in one place, and multiply the field’s strength by roughly the same number of turns. But the field would still want to radiate far outward, greatly dispersing its strength.

Instead of a spool, let’s wind the copper wire around an iron bar. The iron will constrict the magnetic field, confining it into a very close range, magnifying its power greatly. There’s our powerful electromagnet, strong enough to pick up a junkyard car. Your very own car has dozens of much smaller electromagnets scattered throughout its electrical system. They spring to life to move other metal parts or to push away, or to attract, other magnetic fields that are attached to moveable parts.

Turn the Key to Create a Magnetic Field

It would be impractical to route a heavy battery cable from the battery’s positive terminal to the small, flimsy ignition switch, and to route another heavy cable from the ignition switch to the starter motor. Instead, the positive cable is routed to a solenoid, which is merely a small electromagnet. Turning the key, or pressing the start button, merely energizes the solenoid’s electromagnet, making it attract and move a small metal sleeve, which in turn closes a very heavy brass electrical switch. The heavy switch routes current from the battery cable to the starter motor. Clever arrangement.

But the starter motor still has to spin. To understand how that works, and to unshroud the mystery, let’s build a starter motor. Bolt four pieces of iron evenly spaced around the inside of a heavy metal cylinder (the starter housing), and wind many turns of copper wire around each piece of iron. When battery current flows through the wires it creates four very powerful electromagnets. Call the assembly a stator, because it remains stationary and doesn’t move.

Next, inside the metal cylinder lets place a long axle, iron of course, supported on two end bearings so it can spin easily. Finally, let’s wind several separate coils of copper wire lengthwise around the axle. Can you picture all that wire? Think back to electric motors you’ve seen, like in portable room cooling fans or inside of a hair drier. Lots of coils of copper wires in there, right? Call the axle assembly with all its wire coils an armature, just because.

You May Also Enjoy:
Dead Battery or Do You Have a Bad Alternator? 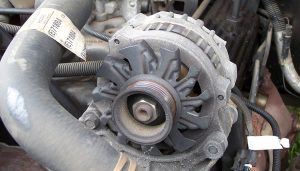 To make the motor spin, simply route some of the battery current through the copper wire coils on the axle at the same time we flow current through the four outer electro magnets in the stator. That will create lots of very strong magnetic fields, which will attract or repel each other so strongly they will spin the axle with enough force to crank an engine over. When the engine starts, simply remove the small current from the solenoid, which will then open the heavy brass switch and cut off all that current to the starter. No electrical mystery is too great for a car guy or girl to understand.

All Electric Motors Work by Magnetism

Now that we have a means to crank the engine over, we have to get the electric fuel pump running. It too is fed by a heavy gauge wire, but not as heavy as a battery cable, because the fuel pump has a much smaller motor. Rather than use a solenoid to switch power on to the pump, let’s use a smaller, lighter version of the solenoid called a relay. You’ve seen many such relays under the hood of your car and under its dashboard. Your car’s owner’s manual even tells you what each relay does. Smaller than a matchbox, relays are used to control almost every electrical component on your car.

The relays can be switched on and off by the tiny electrical printed circuits inside a computer, typically called the ECU for Engine Control Unit. Turning the key on tells the ECU to energize the tiny electromagnet inside the fuel pump’s control relay, which closes a brass switch inside the relay and routes battery power to the electric fuel pump motor.
While we are talking about relays, they control many other electrical components like windshield wipers, engine cooling fans, power seats, electric antennae’s, power windows, air ride suspension pumps and much more. To reverse the rotation of an electric motor, like to raise or lower an electric window, simply reverse the direction of the current through them, which reverses the polarity of the electromagnets. Now you know how that works too.

Back to our fuel pump example, since it is a small motor, lets omit the four electromagnets of the stator. In their place, attach some powerful permanent magnets. They will supply the fields that the pump’s armature pushes against to force the axle to spun. Less current is required. In fact, modern starter motors have larger permanent magnets that serve as stator coils. Again, with that arrangement less current is required to crank an engine over, which is why newer cars have smaller batteries.

With the engine cranking over and the fuel pump running, we need to get the fuel injectors to open and allow gasoline into the engine. The injectors are in fact very precise solenoids. They close when the engine is off, of course, but they are modulated within a somewhat wide range of motion to meter the precise amount of fuel the engine requires under varying operating loads.

The same principle of electromagnets applies here. Current flows through a relay, of course, to the positive side of an injector’s electromagnetic coil. The ground side is controlled by a printed circuit and heavy grounding transistor within the ECU. So rather than simply being on or off, like the starter solenoid or fuel pump relay, the injector is modulated back and forth to control fuel injection.

So far, we have the engine cranking over, the fuel pump running and the injectors opening, all because of magnets. Now we need spark across the spark plugs. Again, we’ll use a magnet to produce those sparks.

The spark comes from the ignition coils, so let’s build one. Let’s take a small iron bar and wind a copper wire around it to make our now-familiar electromagnet. Apply 12-volt current to the positive side of the ignition coil from the run side of the ignition switch. Now we have to cycle the ground side of the coil on and off, very quickly, to energize and collapse its magnetic field. No problem. Older cars used breaker points to do that, but modern cars let the ECU handle that chore. It makes sense, because computers are faster, more accurate, and can vary the ignition timing and advance curve much more precisely than a distributor with a vacuum advance and set of centrifugal weights.

Call that the primary ignition circuit – everything from the primary side of the coil through the ECU’s grounding path. Now let’s build the secondary ignition circuit, which is much simpler. Simply wind copper wire around the coils of the primary circuit, buts let’s go around several hundred more times. We need very fine wire for this. Connect one end of the wire to the spark plug lead, which then attaches to the sparkplug. See it? But where’s this big 40,000-volt spark?

We Need Magnetism to Recharge the Battery

So, our cars do indeed run because of magnets. Since we are drawing power from the battery, though, it will soon die unless we create some new current to recharge it. Again, we’ll use magnets to accomplish that. Let’s construct an alternator.

Start with the stator. Attach several sets of copper wire coils to the inside diameter of an aluminum housing. Connect them in three separate sets, like three separate strings of Christmas tree lights. Next build the armature, again an iron axle with several coils of copper wire wrapped lengthwise around it, and let’s call it a rotor instead, just to be precise.

Start the engine and spin the armature with a fan belt and pulley set up. But no electricity is produced, not yet.

Now run a 12-volt current through the rotor. That will create a strong magnetic field, which as it rotates very fast will cut through all the coils of the stator, producing a cycling current in each of the stator’s coils. It alternates its direction of flow many times per second, hence the term alternating current. To be precisely technical, it is three-phase current because we have three strands of stator coils. To get all the current flows going in one direction (DC current), diodes are used. But all that current would soon overcharge the battery, so the strength of the armature’s field is controlled, modulated, by a voltage regulator or on some cars by the ECU. Make sense?

Next time you are stuck in traffic you can reflect on all the magnets that are hard at work keeping your car running. Did we mention that the air conditioner compressor clutch is the largest electromagnet on the car?