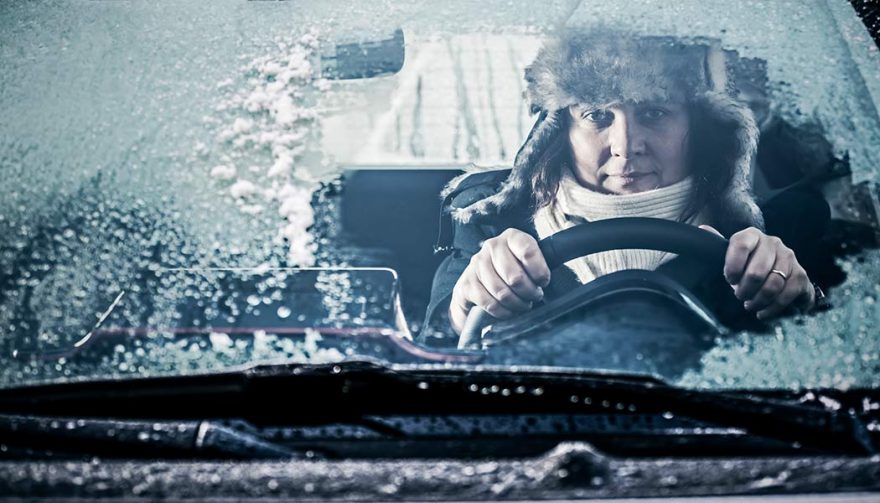 If you’ve caught yourself saying “my car won’t start when it’s cold,” you need to realize winter is almost here. When it’s cold outside bears hibernate, humans don’t want to go to work and cars don’t want to start. Cold weather slows everything down.

But your manager would probably be happier if you show up for work on cold winter days. Sorry. So, let’s look at some reasons your car won’t start when it’s cold, and what you can do to prevent that problem. A lot of your problems can be alleviated if you know how to winterize your car.

The one area of car repair that mystifies many people is a car electrical system. You can’t see electricity, but everything in a car seems to depend on that mysterious, invisible force in some way. And when your car won’t start on a cold winter day, you can bet that at the root of the problem is electricity, or more specifically a lack of it.

When the temperature falls, your car’s engine will need more electrical power to make it start. Unfortunately, also when it’s cold, the battery has less power to deliver. Double jeopardy.

Making it worse, depending on how well (or poorly) you maintain your car, the cables and connections that transmit power from the battery to the engine can offer enough resistance to create a no-start on cold days. Those three things work against you when your manager is impatiently waiting for you at work.

The Engine Is Harder to Spin Over When It’s Cold

Engine oil becomes thick as it cools down, very thick at freezing temperatures. Synthetic oil resists that thickening effect better than conventional oil, but nonetheless all oil thickens to some degree on freezing days. That’s why you drain oil when the engine is warm, because engine oil is thinner and flows better at higher temperatures.

Cold, thick oil creates drag on all the internal moving engine parts that it is in contact with. That drag resists the starter’s force and slows down the cranking rpm. To overcome that drag, the starter will demand more electrical power from the battery.

Technically speaking, it works like this: The slower a starter motor turns, the greater the amperage draw it creates. That’s why trying to start a car with a weak battery can ruin a starter motor. The slow-turning starter motor draws greater current which, in turn, creates more heat inside the starter, ruining it.

To avoid hard-starting problems and engine damage, always make sure your engine has the proper grade (viscosity) of engine oil, especially if you live where the winters have sub-freezing winters.

Because of the chemical workings of opposing chemical elements submerged in an acid bath (yes, it sounds like a horrible environment), batteries have less power to deliver when they are cold. When it’s very cold, they have even less on hand. That’s not good if your engine is poorly maintained and is difficult to start.

If your battery is over three years old, have it tested before winter sets in. If it’s marginal, replace it. It’s better to replace a weak battery sooner than later, when it can leave you stranded.

A very common problem that causes no-starts is corrosion on battery cable ends. It’s amazing that dirty battery terminals might not prevent a car from starting all summer long, but as soon as the first cold snap hits the car won’t start. The culprit is often dirty battery cable ends. They resist the flow of electrical current from the battery to the starter, and it’s most noticeable when the starter motor needs the most power, like on freezing cold days.

It’s a great idea to prevent all that trouble and simply have your battery cables removed from the battery and cleaned thoroughly once a year. Again, better sooner than later.

Leave Out the Ice

Condensation forms inside fuel tanks, falls to the bottom of the tank, then gets sucked into the fuel lines. It can freeze into ice overnight, and prevent your car from starting the next morning.

You can do two things to prevent that from happening. Don’t let your gas tank get close to empty, because that’s when condensation will form more easily. When there’s a quarter left in the tank, it’s time to refill it.

There is a difference, and it is greatest in climates that have the sharpest swings in temperature extremes. When it is extremely hot outside engines will tend to knock and ping when under a heavy load, like accelerating onto a freeway. To prevent that annoying noise, refineries mix in additives to resist knocking and pinging. While it does not ‘thicken’ gasoline, it does raise its flash point.

When the temperature falls to freezing, gasoline with a higher flash point will be harder to ignite. To overcome that problem, refineries that sell to locations with extremely cold winters make seasonal gasoline that has a lower flash point. That makes the gas easier to ignite inside a cold engine, which helps your engine start more easily on freezing cold mornings.

The point is this. If you have a hobby car that is infrequently driven, you might have a hard-start condition on freezing days, if you last bought fuel during the heat of the summer. Just saying.

But always try to buy fuel from busy gas stations that will have the current fuel recipe. A quaint country store that rarely sells fuel could very well have summer gas still in its storage tanks when winter hits.