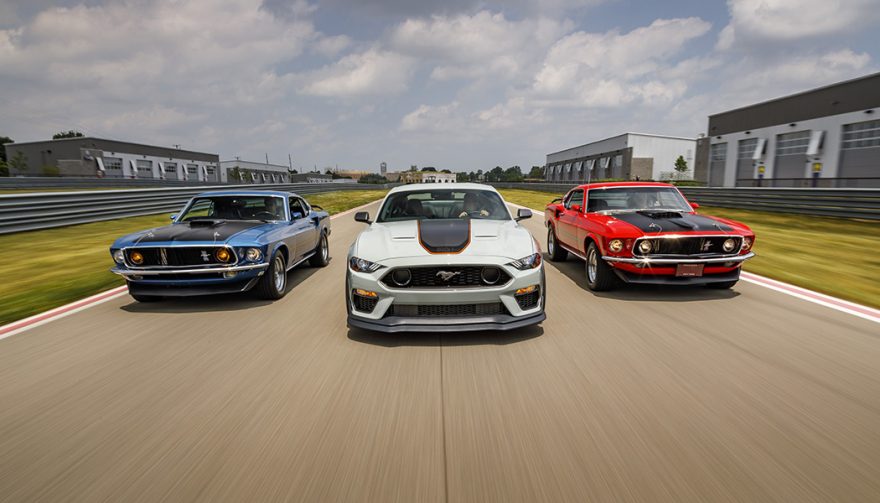 While putting the Mustang name on an electric sport utility vehicle might make you think Ford has lost the plot, this one won’t. The Ford Mustang Mach 1 is back, borrowing some of the best bits of the Shelby models, but leaving much of their cost behind. Ford calls it the “pinnacle of style, handling and 5.0-liter V-8 pony car performance.” We call it one of the coolest Mach 1s yet.

The original Ford Mustang Mach 1 was offered in 1968 as a performance pack offered with the fastback SportsRoof body, matte black pinned hood, competition suspension, and a choice of V8s ranging from a 5.8L all the way to the 428 Super Cobra Jet drag-ready model. The name came back again as a shadow of its former self on the Mustang II, and then in 2003 as a trim to sit between the SVT Cobra and the GT.

This time, the Ford Mustang Mach 1 starts with a version of Ford’s 5.0L Coyote V8 tuned to 480 hp at a remarkably high 7,000 rpm. That’s 20 hp more than the standard Mustang, accompanied by 420 lb-ft of torque. The engine does it by borrowing the intake manifold and engine oil cooler from the Shelby GT350’s 5.2L flat-plane V8. That cooler gives it 50 percent more oil cooling capability, helping it stay chill during longer track sessions. 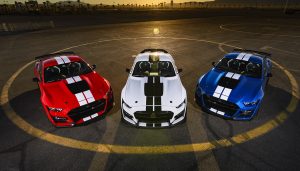 At your right hand is the Ford Mustang Mach 1’s six-speed manual, the Tremec 3160 from the GT350, not the standard car’s. It has rev-matching for smoother shifts and better control, and it has the GT350’s oil cooling for temperature management. Pick the optional 10-speed auto and get a second oil cooler, special torque converter, and a calibration to help improve the car’s performance.

The new Ford Mustang Mach 1 captures some of the style of the original, and while it doesn’t have hood pins, it does have available hood and side stripes in satin black and some exclusive paint colours. There are a new 3D-mesh grille and fake lamps lurking in the opening. The grilles below the turn signals are different as well. Special 19-inch wheels are painted in black.

Underneath, Ford has added two heat exchangers, one for engine oil and one for trans oil, and there’s a cooler for the rear axle to go with the lower diffuser from the GT500. A new underbelly pan is 20-inches longer to smooth the airflow under the car.

Get the manual and you can pick the Handling Package for the Ford Mustang Mach 1, it comes with a special spoiler with Gurney flap, a higher-downforce front splitter, and special wheel lip mouldings. The standard Mach 1 has 22 percent more downforce than the GT Performance Pack Level 1, and 150 percent more if you add the handling pack.

Finishing thins off, the Ford Mustang Mach 1 will have the latest magnetic ride calibration, a stiffer steering shaft, stiffer rear subframe bushings, and a rear toe-link from the GT500. The car will hit dealers next spring.