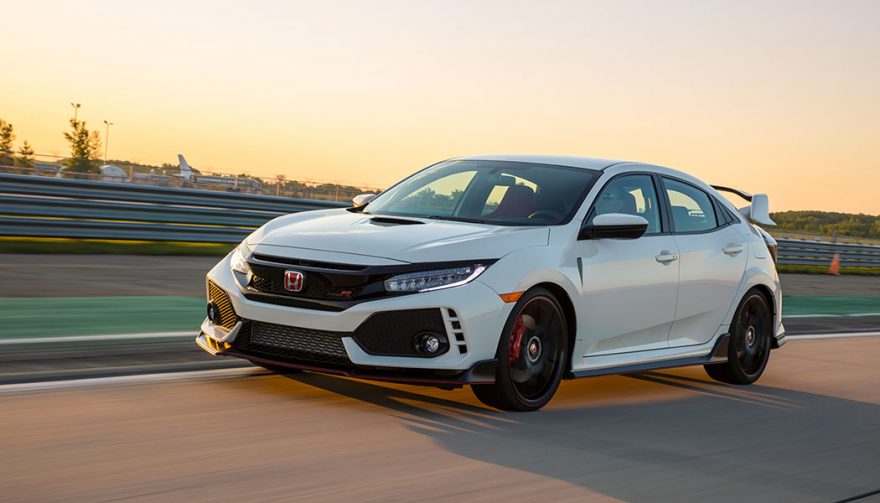 Honda Civic Type R Is More Civilized Than It Looks, And That’s a Good Thing

The Honda Civic Type R is a machine surrounded by fanfare  and drooling enthusiasts. And while its performance can back up the buzz, it wouldn’t be a chore to drive every day.

Below, we’ll get into what the Civic Type R is, and what it isn’t. We’ll give some context for potential shoppers. The gist? In many important ways, the Type R doesn’t drive the way it looks like it drives, and that’s a pretty good thing.

What the Honda Civic Type R Is and Isn’t

The Civic Type R is the highest-performing Honda Civic ever made, and a machine that lays claim to being the fastest-ever front-drive car around the Nurburgring.

Don’t get too hung up on that last point though: impressive feat to be sure, but you probably aren’t visiting the ‘ring in your Honda Civic Type R, and if you do, you won’t come close to that record-setting hot-lap.

Still, it’s fast, with lap times and handling being more impressive than straight-line acceleration. In a drag race, the Type R would roughly tie a Nissan 370Z.

Numerous motorsports-derived upgrades are on board, as is an exotic front suspension, massive brakes and a punchy turbo engine. All models are five-door liftbacks, front-wheel drive and come with a six-speed stick.

Is this the ultimate import compact on the road today? Maybe, maybe not. There’s competition in this segment, much of it equipped with AWD, and highly established. Honda’s late to the party, here, but they’ve arrived with a bang. You can bet the Subaru, VW and Ford enthusiasts have taken notice.

The real important thing for actual potential shoppers (not smack-spouting YouTube commenters) to understand? Read this twice: despite the performance figures, this machine at its core is still very much a Honda Civic. Only all the things that make the Honda Civic a great daily commuter, like good gas mileage and comfort, have been compromised for a top-dog performance experience. 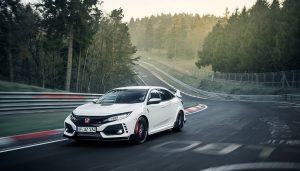 Visually, there’s little mistaking the Honda Civic Type R as anything less than a hardcore, high-performance track-beast. The wing, splitters, scoops, vents, big Brembo brakes and widened body all scream “race car.” There are even three exhaust pipes. Seems designers were told to stick a scoop or vent anywhere there was more than two square feet of bare bodywork. To your writer, the look is garish, obnoxious overdone. Too much. Too busy.

And this will help Honda sell tons.

Surprisingly Easy to Live With 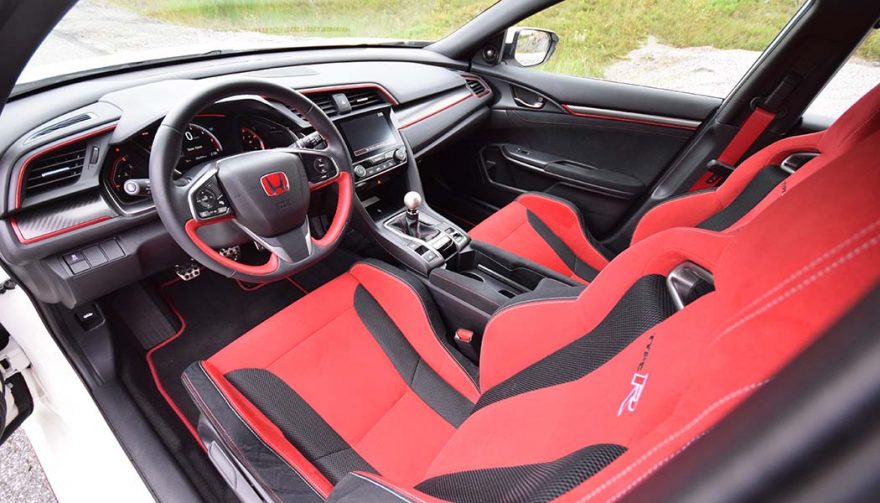 Drive it though, and you’ll find a machine that’s a whole lot friendlier than its image leads on. In fact, the Civic Type R is one of the most commuter-friendly high-performance compacts on the road.

Start the engine, and the Type R comes to life with just a peep louder than your regular Civic. The clutch and shifter both require a little more effort than a regular commuter car. The clutch feels positive and grabby, and holds lots of power for fast launches, but won’t wear you out in traffic. The shifter isn’t one-finger easy, and has a firm and solid action.

Steering is nice and light, too, especially at lower speeds. So parking or navigating low-speed traffic is a breeze. With the adjustable dampers set to their “Comfort” mode, the Honda Civic Type R offers up an even smoother rough-road ride than the Civic Coupe Touring I drove earlier this year.

If you’re worried that the Type R might be too hardcore for use as a daily driver, don’t.

And despite a cabin that looks like it is a fire extinguisher away from fully race-prepped, you get plenty of storage for smaller items, lots  features, and even a set of USB cable pass-throughs to reduce cord clutter. There’s plenty of added flair, including a metal shift knob and serialized number plaque, but all of the best attributes of the new-generation Civic’s cabin are fully intact.

Think of performance in the literal sense of the word, and you start to understand the Civic Type R even better. A performance is a show. A spectacle. An arrangement of sounds and sights and sensations designed to create a memorable experience. And, in that regard, the Type R puts on a hell of a show.

The engine is beautiful. It provides drivers with 7,000 revs to play with, and the turbocharger stays on strong, right to the redline, never running out of breath. The result, opened up, is a powerplant that combines both robust torque throughout the entire rev range, and also revs to the moon.

Note that it’s a quiet performer, relatively speaking. Enthusiasts may wish to budget for an exhaust system upgrade, but those after quiet power will like the setup. The engine is barely audible during cruising or light throttle, and at full throttle and high revs, it’s loud, but not excessively.

Too bad about the exhaust note though. Most of the time, Type R is no more exciting to listen to than a Shop-Vac.

The big Brembo brakes offer a familiar feel. They are a bit numb and imprecise when used gently, but with precision building the harder they’re worked. These brakes feel best when they’re operated severely.

And the handling? Wowsers. Tip the drive toggle selector into the most aggressive “+R” mode, and it feels like the dampers and steering rack are both replaced by concrete. Dialed in this way, drivers direct the Type R with tiny but very heavy and deliberate steering inputs.

Drive the pants off of it, and it’s all about playful confidence. I’m not sure I’ve ever driven a front-wheel drive car that was this frisky. And don’t worry, the Honda Civic Type R is front drive, but on dry, warm pavement, you don’t really need AWD anyways. It’s that good. Torque steer? Forget about it. All said, this thing has some seriously authentic performance moves.

Gripes, keeping context in mind, were minimal. Usually in a performance car you wish for a more comfortable ride, more room and an easier drive. That’s not the case here. Still, I wish the central command screen looked a bit more modern and colorful. And when’s opened up I wish the sound matched the way the Type R looks.

My biggest gripe? The ridiculous rear spoiler. It looks silly, and what’s worse, it makes the rear liftgate feel like it weighs 406 pounds when you open it.

Ultimately, if you’re considering the Honda Civic Type R, you should probably go for it. It’s considerably less hardcore and compromised than it looks, but every bit as entertaining. Pricing from the low forties.