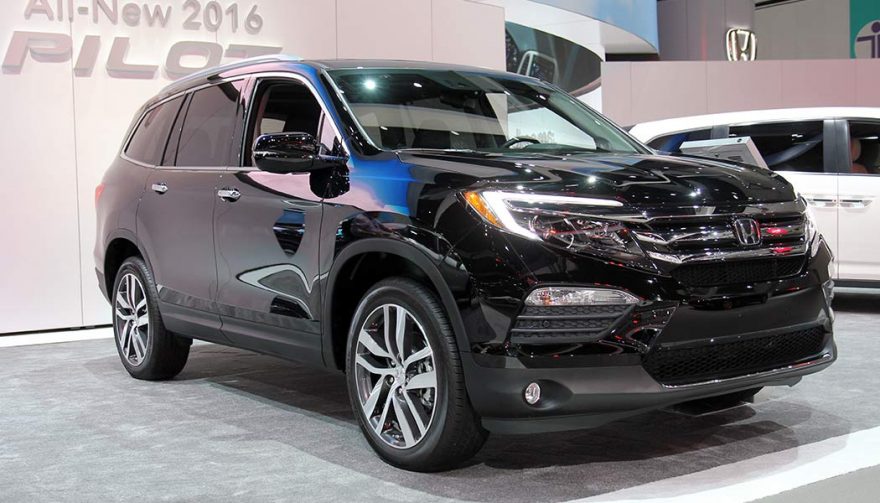 The redesign coupled with all the new features and improvements earned the Honda Pilot the title of 2016 SUV of the Year.

Do you have a really big family? Are you the favorite uncle who lives in Orlando or San Diego and gets the Spring Break visits from relatives in the North? Or do you simply need 90 cubic feet of cargo space to haul around all your son’s little league team gear?

If you fall into one of these three categories (or even if you don’t) you are going to love the completely redesigned Honda Pilot SUV. Even better, it’s one of the best SUVs under 30,000.

Always a strong performer for the Japanese brand, the 2016 redesign coupled with all the new features and improvements impressed the editors at Autobytel, so much so that they named the Honda Pilot as 2016 SUV of the Year! There is little doubt that the Pilot will be the people-mover SUV that gets a hard look by consumers that might also be considering the likes of Toyota’s Highlander, Chevy’s Traverse or even the Hyundai Santa Fe.

Bigger, Badder, Better than Before

The big, blocky look of previous Pilots has been replaced with a sleek, aerodynamic crossover profile that’s 3.5 inches longer yet 300 pounds lighter. Low mass materials like aluminum and high-strength steel account for the weight loss and the longer wheelbase offers up a smoother, sedan like ride and handling. This is a big three row hauler that comes across as a luxurious sedan rather than a bus and here are a few reasons why:

Those folks who regularly use the third row benefit from the extra length with a full two inches of leg and knee room added between the second and third row. Full sized human beings can now comfortably ride in the back of the bus. The Elite trim swaps out the second row for 2 captain’s chairs adding a touch of luxury for those lucky people while giving the third row passengers marginally more space.

The Pilot has minimized the ‘utilitarian’ appearance of its interior by replacing hard plastic touch points with soft touch of premium materials. The dash has been dressed up to include an available 8″ infotainment screen and improving its connectivity capabilities. The overall feel is one of an upscale sedan rather than a workhorse SUV.

You May Also Enjoy:
Useful Utility: We Drive the 2019 Honda Passport 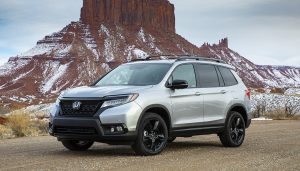 Safety is the number one priority for a vehicle that is primarily used to move big families and the Pilot is packed with safety features including a new LaneWatch camera, lane-keeping and lane tracking systems, autonomous front collision braking and an alarm system if the Pilot suspects the vehicle is leaving the road. All these features plus the safety systems that were in place last year.

The 2016 Pilot is powered by the same 3.5L six cylinder engine as before but thanks to new and improved direct fuel injection performance has improved to 280 horsepower and 263 lbs.-ft. of torque. Except for the Touring Elite trim which has a new 9 speed automatic, the Pilot is equipped with a 6 speed transmission.

New for this year is the optional all-wheel drive system which provides measurably better performance in rain, mud, snow and sand than the standard front-wheel drive setup. AWD allows for torque to be shifted side to side to assist in cornering and axle to axle for better traction if you opt to do some light off-roading.

The Price Is Right

The Pilot still remains affordable family transportation with a base price of $29,995. The top end Elite is pricy at $46,400 but leaves a pretty big spread and a ton of options that allow the buyer to customize his or her ride.

Those are some of the features that make the Pilot worth taking a hard look at but just as important are the reports coming in from customers and automotive editors alike on the driving experience.

From editors come comments about the ride; the longer wheelbase and the suspension set up are worthy of a luxury sedan says the reviewer from Edmonds. The handling is not sporty but solid and curves can be taken with confidence in all types of weather particularly if equipped with AWD. The improved horsepower gives the ride more than adequate kick for passing while at the same time providing a better EPA mileage rating than previous years. Overall, thanks to the 2016 changes, the Honda Pilot is now one of the best large crossovers available.

From customers who own the 2016 the main theme seems to be value followed by safety. The price points that they purchased their vehicles at were considered bargains given the performance, convenience, safety features and reliability of the ride. Ironically, because of the multitude of pockets and holders that are spread throughout the interior, trash can accumulate quickly if passengers neglect to clean up after themselves.

If you need to move up to 8 people and you want to do it in comfort and style, or you need an SUV with cavernous cargo space, you have to give the 2016 Honda Pilot serious consideration.