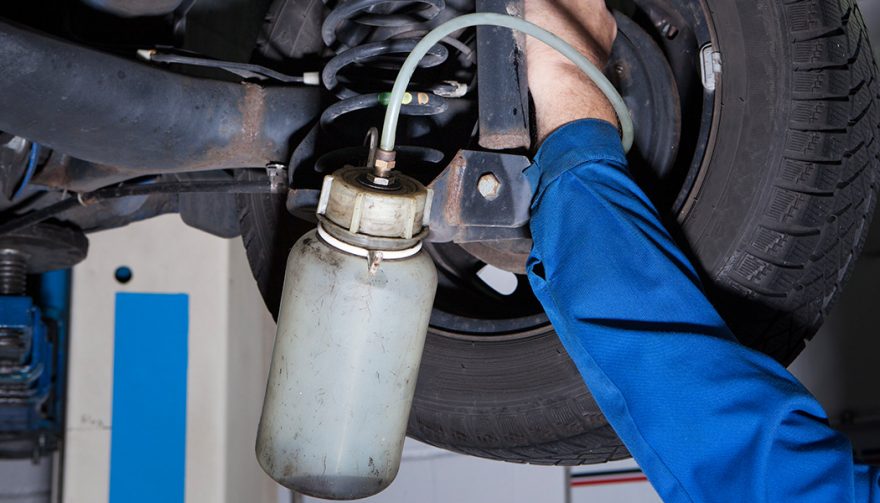 A Mechanic's Guide On How To Bleed Brakes

Brake Lines Giving You Issues? Try Bleeding Them Out

Are your brakes dipping closer to the carpet than they should? Do they feel spongy? If you inspect the brake pads and they appear to be in decent shape, the “spongy” feeling is most likely caused by air in the brake line. The good news is, learning how to bleed brakes is easy. You can fix the problem with a box wrench, a turkey baster, a plastic soda bottle, some tubing, and an assistant who is tall enough to reach the brake pedal.

That’s the drill for an older car without ABS. A newer car with ABS can get a bit trickier, and it can also be downright expensive. Some models  require a very pricey proprietary ABS scan tool to cycle the pump and valves to purge the last of the air, but we’ll get to that in a minute. First, let’s look at what exactly is causing your car issues. Then, we’ll go over how to bleed brakes.

How Does Air Enter the Brake Line in the First Place?

In its simplest form, your brakes are a hydraulic system. When you press on the pedal you are pressing on a “solid” column of brake fluid which in turn causes the calipers to press the pads against the discs. Air is “compressible.” When even a bubble or two enters the brake line, it’s like installing a soft spring in that solid column of brake fluid. That’s what gives you the spongy feeling, and that’s what degrades the efficiency of your brake system. When this happens, your confidence in your car’s ability to brake might be a bit shaky.

So, how does that air get in the line?

Well, there are a number of different ways. DOT brake fluid only has a life span of roughly three years. It has an affinity for moisture. When moisture enters the line it reduces the boiling point of the fluid and can cause boiling. This is particularly true if you do a lot of hard braking or travel long, downhill grades on a regular basis. Boiling causes stream, and part of that steam will turn into air when it condenses.

Changing brake parts like calipers will also allow air in the line.

Worn brake pads are a common cause. When the pads get thin the “solid column” has to reach further to apply the pressure being applied from the pedal. That means the column needs to be marginally longer, which in turn means it needs more fluid. That fluid comes from the master cylinder reservoir.

If the level of fluid in the master cylinder gets too low, an air bubble can find its way into the line. That single “soft spring” can cause the fluid level in the reservoir to drop even lower when the pedal is applied, which increases the chance of more air bubbles entering.

If you have ABS, air (and other contaminants) in the line becomes an even bigger problem. Unlike the “solid column” system, ABS has a hydraulic pump. That pump operates at several thousand psi, forcing brake fluid through very small valves. Toss in an air bubble at that pressure and you can froth up the fluid like milk for a cappuccino.

The fix? Bleed the air from the system and put in fresh, clean brake fluid. Oh, and replace those worn pads while you are at it.

How to Bleed Brakes for Non-ABS Systems

Time for a quick overview on how to bleed brakes for a non-ABS system! We are going to bleed the air from each of the four lines one at a time. By necessity, we will be replacing the brake fluid with new fluid that should last 2—3 years. This method has us draining the longest line first, and the shortest line last. Most master cylinders are located on the driver’s-side of the engine compartment. That means the longest line runs to the passenger-side rear brake. After that comes the driver-side rear, then the passenger-side front, and finally, the driver-side front. 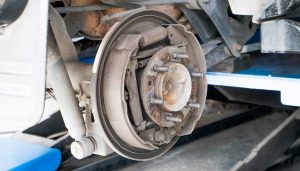 To start, you’ll need a couple cans of brake fluid, a box wrench that fits the bleeder valves, clear tubing to drain the fluid, and a some sort of bottle to collect the fluid in. You’ll also want a turkey baster or syringe to help drain the reservoir. And, of course, you’ll need an assistant, and trust us, anyone who can reach the brake pedal will do.

If you have enough clearance you may be able to reach the bleeder valves without jacking up the car. If not, you’ll have to get the car up on stands. Before you do that though, you want to use the turkey baster to suck out the fluid from the master cylinder reservoir. Use a lint free cloth to wipe out the inside of the reservoir, and then refill it with new fluid.

These instructions will work if you have an older car that is not equipped with ABS. However, if you do have ABS you’ll have a slightly different method to use.

How to Bleed Brakes for an ABS System

For starters, air in the ABS modulator is pretty rare. The only way air can get into the unit is from “upstream.” Air entering from “downstream,” like when replacing brake parts, cannot enter the modulator. That said, it’s still a good idea to “bleed” the ABS to get new fluid.

The modulator is a pump that forces the fluid through 8—10 valves. There are about a half dozen systems, and each has its own process. For the best results you should check the manufacturer’s instructions. Several have no bleeder valves, and bleeding is accomplished by cycling the valves in the pump. Unfortunately, in order to do that, you will need a special modulator scan tool.

The scan essentially sends an electronic command to the modulator to perform a cycling routine. If you don’t have a scan it may be a better idea to have the bleeding done by a pro. Otherwise, expect to spend between $100—$300 to buy the tool. Some parts stores offer the scanner as a rental, which might be a viable alternative; it never hurts to ask about this option.

There is a way to force a cycling, although it is not a responsible method. Find a stretch of road where you can perform a few high speed, ABS-initiating stops. Presto, the modulator has recycled.

Assuming you have either the tool, or you have employed other means to cycle the modulator, you can then bleed the lines at the wheels. However, the sequence of bleeding may vary with an ABS system. You still want to bleed the longest line first, but with ABS the distance is measured from the modulator, not the master cylinder.

Modulators can be mounted in the engine compartment, dead center of the vehicle. Sometimes, one is even mounted in the rear. Make sure you identify the location, and then determine your sequence for valve bleeding.

When in Doubt, Bleed it Out

Few things will generate anxiety faster than discovering you can’t stop your car as you approach a red light. Now that you know how to bleed brakes, do it as soon as you detect an issue in the pedal. What’s it cost you? A couple of cans of brake fluid and 15–20 minutes of your time? That’s better than risking the chance of not coming to a full stop at an intersection. You can even get brake fluid online these days.

We don’t want this to sound like it is something you have to do every year. In fact, some new cars are designed so that you will never have to bleed the brake lines. But if you are in an older ride, a change of fluid every three years should prevent air from finding its way into the system.

If you use a professional to bleed your brakes, there’s no law that says you have to tell your gearhead buddies. Walk tall, and brake with authority.