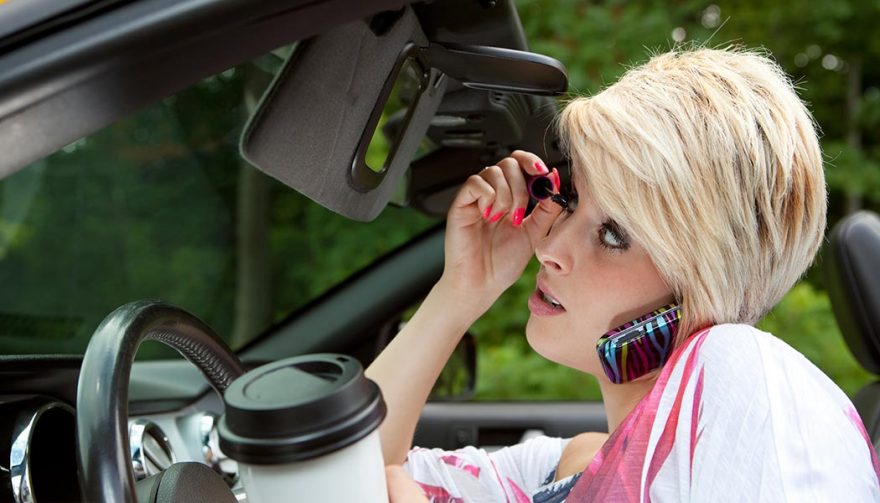 We all tend to think that everyone else sharing the road with us is somehow a less skilled driver than we are. However, chances are good that there are one or two things that you’re doing wrong behind the wheel. These bad driving habits can range from something as simple as being “lead footed” to those that create serious problems for your vehicle.

Whether you’re a confirmed speeder, can’t seem to keep your foot from resting on the brake pedal at all times, or you’re convinced that you can text and drive at the same time, those habits can be easily broken.

Most of us drive with one foot to operate the gas and brake pedal, but some drivers use both feet. While that can seem like the thing to do (after all, you do have two feet), and you don’t really need to keep that other foot free for the clutch if you’re driving an automatic, it can lead to serious problem. Two-footed drivers tend to let their left foot rest ever so slightly on the brake pedal while they’re driving. This creates a couple of problems.

First, it means that you’re actually riding your brakes. If your foot is on the pedal, the braking system is engaged, meaning that you’re putting an immense amount of wear on the pads and creating significant heat in the rotors, which will warp them. Second, it means your brake lights are on and the car behind you can’t tell when you actually begin to slow down. The simplest way to break this habit is to force yourself to use just one foot to drive – the same foot should operate the accelerator and the brake pedal. Keep your left foot safely out of the way.

The most obvious example of this is texting while driving, which has become such an epidemic that many states have passed laws banning it completely. However, there are many other examples of distracted driving, including eating and drinking behind the wheel, fiddling with the radio, talking on the phone and more. Distracted driving puts you and your passengers in danger, as well as those with whom you’re sharing the road. It’s time to put a kibosh to it. The easiest way to stop this bad habit is to put the phone down. Commit to ignoring the phone if you’re behind the wheel. If necessary, turn it off. You can also download apps and utilities that will alert any texter that you’re behind the wheel and unable to answer, but that you’ll respond as soon as possible. You should also stop eating and drinking behind the wheel – grab a bite before you slide into the driver’s seat.

You May Also Enjoy:
The Irony of Automotive Safety 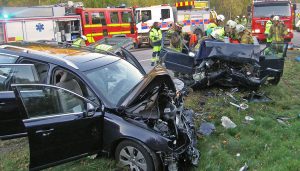 This is one that most of us are guilty of committing, and many of us have little choice in the matter (or so we think). Driving while you’re tired is almost as bad as driving under the influence. In fact, the NHTSA rates it as just as dangerous as driving while drunk. If you’re in danger of nodding off behind the wheel, there’s no way you can be safe, and the ultra-comfortable interiors of today’s cars don’t do us any favors. The best way to break this particular habit is to get more Z’s each night. If you’re feeling tired and about to fall asleep, find somewhere to pull over and get out. Walk around the car a few times and don’t get behind the wheel again until you’re sure you’re awake enough for the task.

Driving Too Fast for the Conditions

We’re all guilty of nudging the speedometer beyond the actual speed limit. That’s dangerous in its own right, but when you combine speed with poor driving conditions, it’s a recipe for disaster. Rain, sleet, snow, hail, high winds and other conditions can significantly impair your ability to drive safely, putting your life at risk as well as the lives those around you. It can be a real challenge to slow down to the speed limit (or under if the situation warrants it), but it’s essential that you do. The Federal Highway Administration sates that 24% of crashes are directly related to inclement conditions (and driving too fast for them). Get into the habit of leaving a few minutes early to help avoid this particular problem.

How close do you drive to the car in front of you? Is it close enough that you can see the pores in their paint job? Back it up a little bit – you’re tailgating. Not only is it a surefire way to anger the driver in front of you (and road rage is no joke these days), but it’s an incredibly unsafe situation. You should have a full car length between you and the vehicle in front of you for EVERY 10 MILES PER HOUR you’re traveling. So, if you’re driving down the interstate at 70 miles per hour, there should be 7 car lengths between you and the car in front of you. How do you break the tailgating habit? It’s actually simple. When you notice that you’re getting closer to the car ahead, estimate the distance and back off. Just being aware of the fact that you’re getting too close can help you break this dangerous driving habit.

Wearing a seatbelt is the law, but you might not be in the habit of following this particular one. More and more states are eliminating exceptions to this rule, as well – Georgia just axed their pickup truck law, which allowed drivers and passengers in pickup trucks to go without their belts. Other states are following suit. So, not only are you on the wrong side of the law if you don’t buckle up, but you’re putting yourself in serious danger. The best way to break this habit is just to buckle up. Eventually, you’ll feel strange without the belt.
The most important tip for breaking any bad driving habit is simply this – pay attention and be cautious. The roads can be incredibly dangerous, and every bad habit just puts you that much closer to an accident, or even a fatality.