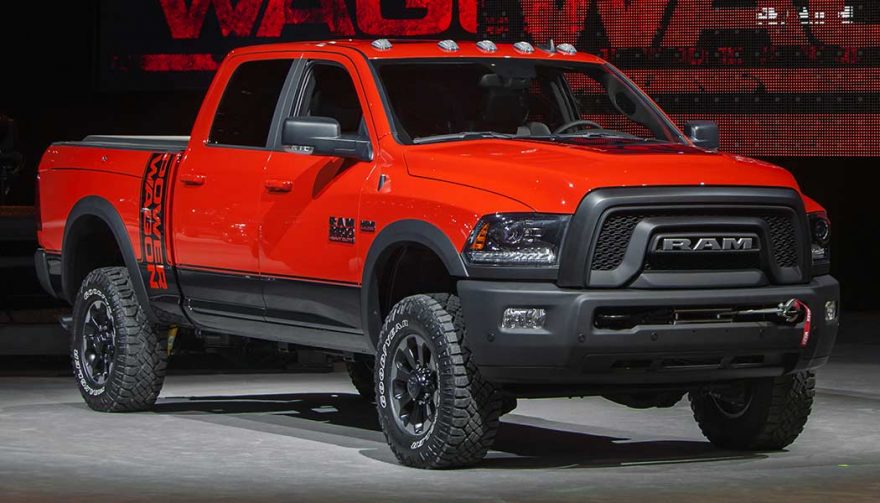 The 6.4-liter HEMI V8 on the 2017 Ram Power Wagon leaves absolutely no room for disappointment.

Ram Trucks have been the center of attention in the truck market in recent years. You’ve seen the Ram 1500 Rebel, the Sportsman, Tradesman, and the crown champion of truck fuel efficiency, the Ram EcoDiesel. Why not add another award to the mantel with the soon-to-be-released 2017 Ram Power Wagon?

That’s right, folks. It’s been the talk of truck town for the longest time – the refresh of the Ram Power Wagon, and it’s coming to fruition in the fall of 2016. While the official release date has not yet been announced, a loose time frame is better than nothing.

In case you missed the press release in February, the 2017 Ram Power Wagon is kind of a big deal. It improves on the best of the best and is without a doubt going to leave its competitors eating dust.

It’s going right up against the Ford F-150 Raptor. See how the two vehicles compare in a side-by-side comparison of the Ram Power Wagon vs Ford Raptor.

You thought the Rebel grille was bold…check out the supersized grille on this beast. The Power Wagon is immediately recognizable with its monstrous black grille in flat black. The bumper and accents in the front boast the same flat look in black powder coating as does the rear bumper. Staying up front, an exclusive black hood decal declares the Power Wagon and euro-style blacked out headlights complete the aggressive approach. (Yes, there’s a winch mounted below, but we’ll get to that later)

Black decals continue down the side of the truck, culminating in a vertical “Power Wagon” emphasis behind the rear doors. Looking at the 2017 Ram Power Wagon from behind, it’s impossible to miss the emphatic decal under the “Ram” emblem. That’s just in case you missed it everywhere else it’s written on the truck.

The new 2017 Ram Power Wagon’s design, colors, wheels, lighting, and graphics are all inspired by the 79-80 Macho Power Wagon, the toughest truck of its time as well.

The 2017 Ram Power Wagon isn’t particularly suited for the business class. It screams “I play hard”, from the tire-tread design on the seating surfaces to the Power Wagon stitching and easy-clean materials.

Don’t let the hardy appearance fool you, though, because the infotainment system is second to none. The 8.4-inch UConnect system is unparalleled in quality and function, and even has an off-road theme in the background of its display. Heated seats are optional, and the instrument cluster’s 7-inch display has a “Power Wagon” welcome on startup before offering intuitive, easy-to-read controls and information for the driver. 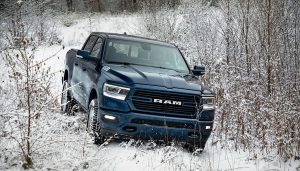 On its renowned Ram 2500 chassis built with 50,000 PSI steel, there had to be a class-leading powertrain installed. The 6.4-liter HEMI V8 leaves absolutely no room for disappointment. This leviathan has 410 horsepower and 429 lb-ft of torque, good for Best-In-Class numbers in both categories for gas-powered trucks.

That insane power is transferred to the wheels from a rock-solid 66RFE six-speed automatic transmission. Other truck manufacturers are bumping up to eight, nine, and even ten-speed transmissions, but the 2017 Ram Power Wagon finds it wholly unnecessary when it can get the job done with just six gears.

Headed off the beaten path? Engage the four-wheel drive manually with the bulletproof Borg Warner transfer case. Miffed that the transfer case isn’t electronic? Don’t be. Four-wheel drive shifts are certain and foolproof when done manually, though you may notice the front and rear differentials are lockable electronically, providing to true 4WD operation. Compare that to the 2016 Dodge Ram 1500 Big Horn.

All that power does nothing for you if you don’t transfer it to the road effectively. It’s yet another thing the Ram Power Wagon does so well…

Let’s look for a moment at those beefy tires. Factory-mounted on the 2017 Ram Power Wagon are 33-inch Goodyear Wrangler Duratrac tires, and – wait a sec, isn’t that the same tread pattern as you see on the seats? Yes, it is!! Those knobby, gravel and dirt-gripping 33’s are installed on some incredibly sharp, machined black and silver wheels to traverse the roughest of paths.

When the terrain gets even tougher, the 2017 Ram Power Wagon excels yet again. It features Articulink, an electronically disconnecting front sway bar that allows for the ultimate in axle articulation and wheel travel. Bilstein shocks dampen input from the harshest of surfaces and give the most comfortable ride possible all around.

Keep your eyes and ears open for the official release date of the 2017 Ram Power Wagon, coming in the fourth quarter of 2016.