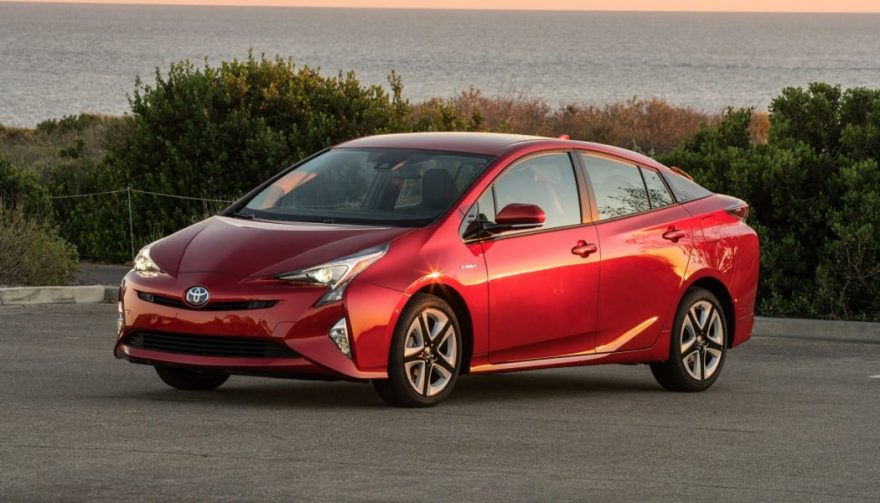 2017 Toyota Prius Review: Can It Charm a Car Buff?

Can the 2017 Toyota Prius maintain the car’s eco-relevancy?

Buying a Prius used to be a loud statement about your dedication to the environment. Now that the car is in the second year of its fourth generation, that messaging seems to have toned down some.

While it’s still all about saving gas, electric cars have taken the lead for people wanting to take a stand. What role does the Toyota Prius fill? What is its appeal in modern society?

I’ll admit, I’ve never found the Prius to be an interesting car to look at. For this current generation, Toyota tried really hard to add some excitement to the exterior.

Those efforts won’t go unnoticed, because they’re pretty in-your-face, and not in the good sort of way.

This is especially noticeable with the car’s rear. The wild angles of the taillights combine with a sudden drop-off for the rear window, creating a very visual abruptness.

More successful is the contouring and body lines for the sides. They’re still overstated and feel out of place.

Toyota pulls off the front end the best. It has the appearance of a cat sneering at a mouse. That look is strange for a tame hybrid hatchback. 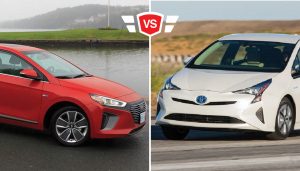 When you look at the interior, it’s nothing to scream about. Most surfaces feature clean lines. The dash isn’t littered with buttons, but I’ve seen far better designs. The gauge cluster in the middle of the dash by the windshield may be functional, but the layout has a poor aesthetic.

The big appeal of the Prius is fuel economy, and you get that in spades. According to the EPA, you can expect 54 mpg in the city and 50 mpg on the highway.

That’s pretty efficient, but some competitors come close to those figures. The Hyundai Ioniq Hybrid exceed them. Still, that’s impressive fuel economy, if you’re not ready to jump to fully electric cars.

To achieve the fuel efficiency, Toyota starts with the 2ZR-FXE engine. It’s a 1.8-liter Atkinson cycle four-cylinder with dual overhead cams and 16 valves. Combined with the electric assist, you get a whopping 121 hp at your command. Peak torque comes in at 105 lb.-ft. As always, the Prius isn’t about power, that’s for sure.

Depending on the version you get, the Prius weighs just over 3,000 pounds. A 0.24 coefficient of drag is good, but not unheard of these days. I guess because the car’s efficient, the tank only holds 11.3 gallons of gas.

The Prius is bristling with standard safety features. All models have a backup camera, which features a decent angle and video quality. LED daytime running lights, hill start assist and heated/power-adjustable side mirrors are also standard.

You also get side curtains and a driver’s knee airbag on all models. Toyota Safety Sense, which bundles together a few systems, is also a standard offering.

All the modern driver assistance techs you’d expect are available to add onto the car. You can also get a color heads-up display, which is surprising.

The 2017 Toyota Prius is not hot rod, but that was never its intention. The thing isn’t even quick, although the extra torque off the line does give it a bit of a jackrabbit quality. But you won’t be wowed as you press the accelerator down, especially on the freeway.

Steering is a bit sloppy. Body roll is more than I prefer. The brakes feel mushy. Pushing it through turns is scary, and you hit the limits quickly. I would be scared to take it to any track, or even for an Autocross event.

Even with all those performance shortcomings, the Prius was more entertaining to drive than I thought. It’s kind of like the nice grandma next door who’s really into professional wrestling.

The interior, however, was freakishly quiet. So long as you weren’t driving, you could easily catch a nap.

While the suspension isn’t engaging, it sure soaks up bumps. As opposed to the previous three generations, the car seats are now on the high end of decent.

For a Prius, the interior feels fairly nice. Some surfaces have a cheapness about them, and the white trim on the center console, stack and steering wheel looks like it nicks up quickly.

Check Out the Competition Before You Decide

I think if you’re looking for a reliable and highly efficient gas-powered car, this one is a good deal for the price.

At the same time, you’d be doing yourself a disservice to not check out the competition, including the Kia Niro. But in the end, the Prius does exactly what it was made to do.