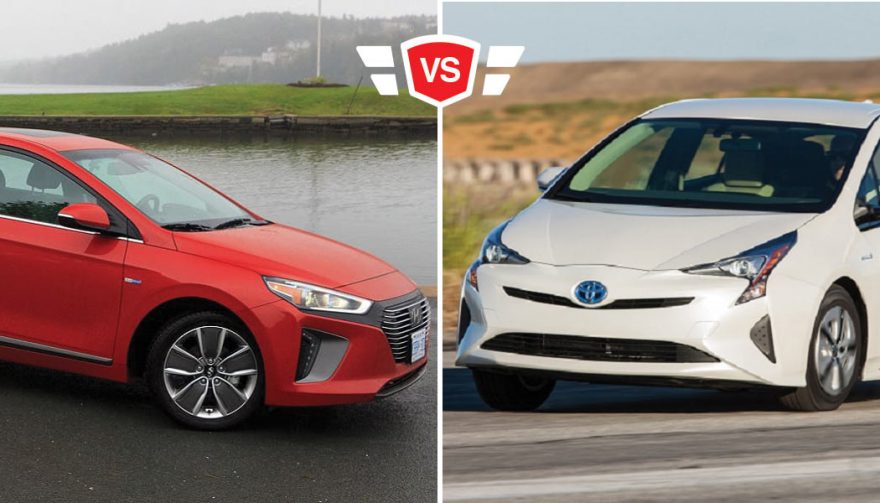 They’re both fuel-sipping hybrid specials on two different paths to maximize fuel economy. One wants to make sure that you don’t forget that it’s a hybrid. It’s full of special gauges, electric mode buttons and lots of regenerative braking. The other takes it easy on the gauges and branding. It uses a dual-clutch automatic in place of a CVT, and it doesn’t have an electric mode button. So here’s a look at the Toyota Prius vs Hyundai Ioniq hybrid fuel-sipping showdown. 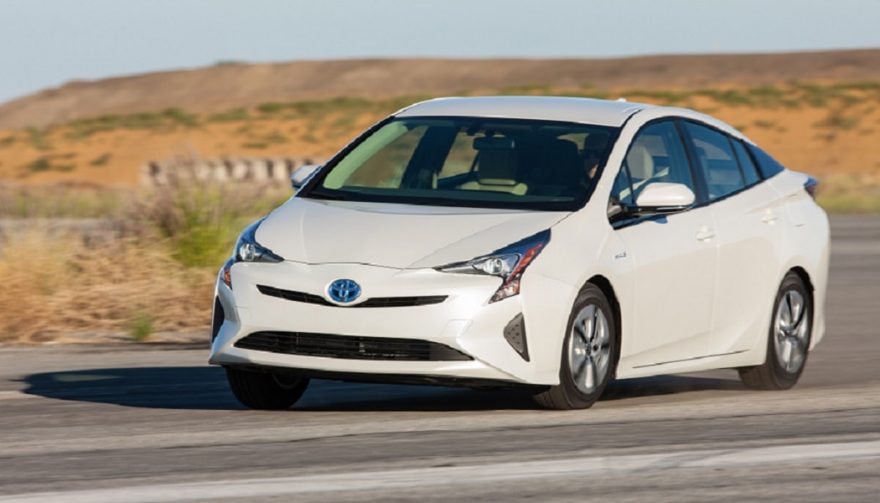 The Toyota Prius was all-new for 2016, so it doesn’t see any changes for 2017. The complete redesign for the fourth generation made huge leaps toward taking the hybridness out of the Prius. From the drivetrain, at least.

Fuel economy got better, and if you closed your eyes and sat in the passenger seat, you might never know it’s a hybrid. The whirs, hums, pings, clicks, and drones of the older cars are completely gone.

It’s a smooth experience, helped by an all-new CVT that is quieter and more responsive. Cutting in and out of the gas engine is completely seamless.

On the outside, the Prius is clearly different. There are active shutters hiding behind the grille. A full underbody tray smooths the airflow underneath, like an exotic. There are little bits and baubles on the headlights, taillights, door sills, and even the doors themselves to help the Prius cut through the air. The styling is unique, but it works. It might not be beautiful, but it’s functional.

The Prius will never handle like a sports car, but it drives surprisingly well. Part of getting good fuel economy in the real world is minimizing braking and acceleration. The Prius helps you do that by cornering much better than you would expect. The ultra-light wheels and a well-developed suspension let you keep your momentum through the bends.

This hybrid system uses a 1.8-liter four-cylinder and a 71-horsepower electric motor. The pair makes 120 horsepower and plenty of torque. Again, it’s not a sports car, but it has no problem with short on-ramps or accelerating into traffic. The braking system gives lots of regenerative braking, saving your brakes while recharging the battery.

This is one area where it really shines over the Ioniq, which has regen braking that slows the car about as much as rolling down a window. The transition from regen to hydraulic braking is also nearly unnoticeable.

Inside, the Prius is well equipped. It has a dashboard info display that can show radio, navigation and vehicle information. It is best used to display hybrid info. That lets you play the how-little-fuel-can-I use game.

Toyota insists on using their own infotainment system interface instead of adding Apple CarPlay and Android Auto. It’s a good system and is reasonably responsive, but knowing the others exist takes the shine off of any proprietary-only system.

It still has the center-mount gauge panel, which looks strange, but really isn’t an issue when you’re driving. The dash is much more appealing than the last generation, especially the white trim surrounding the blue shifter.

What’s more, when you get a Prius you’re getting that Toyota reliability. The Toyota Prius is one of the best low maintenance cars out there. 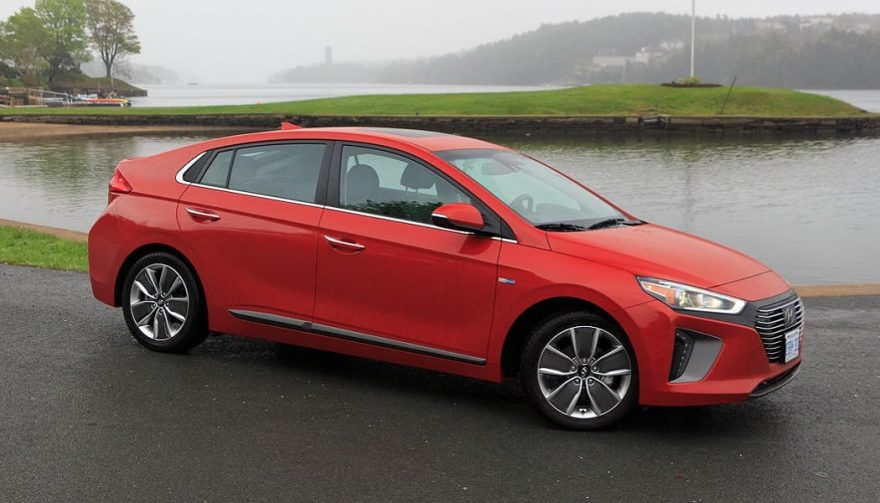 The Ioniq is Hyundai’s first hybrid and all-electric car. There isn’t a gas-only version that they’re modifying. Despite that, it greatly tones down the hybridness compared with the Prius. The body looks like a regular small hatchback, which can turn off some drivers that want to make everybody know their car is eco-friendly.

It’s the same inside. Look up and the gauges are in the usual place. There’s none of the all-digital center-mount strangeness of the Prius. Well, the gauges are still digital, but the speedo looks like a real speedo, the battery gauge is on the far right, and the charge/power gauge is opposite the battery meter. Look down and there is no EV-mode button to put it into electric-only mode. There’s not even an Eco button to dial back throttle response.

What it does have inside is most of the interior as the Elantra. That includes Apple and Android integration on the 7.0-inch screen as well as the classy piano-key climate control buttons.

The driving experience continues the theme of looking conventional, not hybrid. It’s nearly impossible to tell that the Ioniq is a hybrid and not a really quiet gas car. The dual-clutch automatic really helps. So does the extra power.

The Ioniq has a more powerful 1.6-liter gas engine, and a smaller electric motor. The pair makes 139 horsepower, and lots of torque. It feels peppier than the Prius. It handles well too. However, the steering feel is even vaguer than the Prius.

The flip side of that coin is some of the things that make the Prius great. Regenerative braking is a really great thing. The Prius can almost be driven with one pedal, especially if you drop it into “B” mode, and braking that engages the hydraulic system really only happens at a stop.

In the Ioniq, regen is almost unnoticeable. Maxing out the regen gauge barely slows the car, and then you can feel the hydraulic system kicking in. There is also a pulsing in the pedal, probably caused by the interface between the two systems.

Both are loaded with active safety gear. The Prius has Toyota’s Safety Sense P, that adds auto high beams, collision avoidance, lane departure warnings and radar cruise control. The Ioniq has blind spot alerts and rear cross traffic alert on SEL, but adding emergency braking and radar cruise control means adding the tech pack to SEL or Ultimate pack to Limited. At that point, the two are nearly the same price.

These two cars are shockingly close. They are both comfortable, have tons of space, and will use about the least amount of gasoline possible.

Either way, your wallet will be happy. And the rest of you probably will be too.