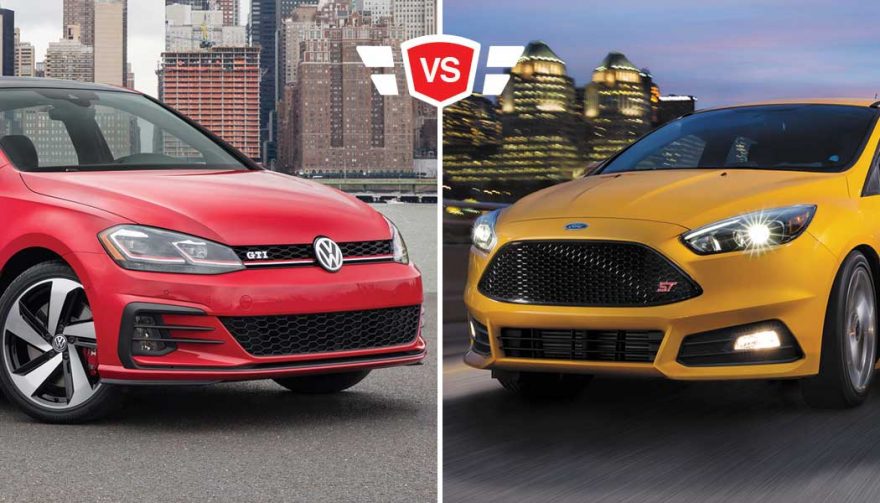 Hot hatches have surprisingly become hot again. For the longest time, the VW GTI was pretty much all alone in the North American market. But several challengers have arisen lately, namely the Focus ST. The question is if Blue Oval has outdone one of the most lauded enthusiast vehicles? Let’s find out who wins the Focus ST vs GTI hot hatch battle.

Let’s face it, the Ford Focus doesn’t make anyone’s heart race. But the Focus ST is a different beast.

Most of what makes it special is a massive force feeding for the engine. The 2.0-liter EcoBoost uses a fairly large turbo to squeeze out 252 horsepower and 270 lb-ft of torque. You get to send that to the front wheels with a 6-speed manual. An automatic transmission isn’t even in the mix.

To balance that out, Ford uses a MacPherson strut sport-tuned front suspension. Electric power steering keeps sensitivity low as you power through straightaways. In the back is a Control Blade independent suspension, plus a stabilizer bar. Ford also throws in torque vectoring control. 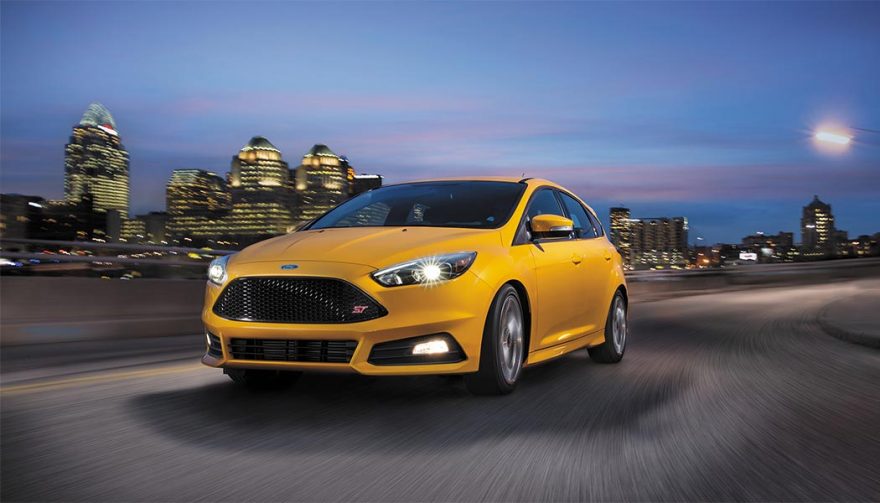 Most people will mistake the Ford Focus ST for just another boring Ford Focus at a glance. If you want a little bit of stealth, you can get it with this car. But then, the ST badge is on the chin spoiler, central exhaust, rear wing and other locations.

Inside, you can get Recaro front seats. They do a good job of holding you in place, which is necessary with this car (more on that later). While the cabin is nice, nothing about it screams near luxury. It’s a Focus, after all.

Cargo is borderline between decent and kind of tiny for a hatch. Sure, most people don’t buy these for hauling groceries, but as your daily driver, it does matter. You also get a rearview camera, driver knee airbag, dual-zone automatic climate control and other goodies. The analog mini cluster gauges at the top of the dash are especially neat.

There’s no denying the Focus ST is quick. Acceleration comes on strong. But the gears are a little on the short side, so be prepared to shift more often than you might like – that’s a preference thing. You can really get moving with this little hatch.

But wait, there’s more. Steering feels fairly tight. I mean, the Focus ST isn’t a GT3 or anything, but that’s to be expected. My big complaint for this car is torque steer. Really lay on the accelerator and the thing will start to go in a direction you don’t want. It gets worse as you shift between first and second, or second and third while accelerating hard. 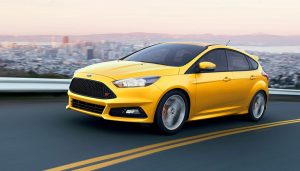 Let’s just say if you were to enter it in an autocross event, be prepared to murder some cones. I would be extremely cautious with the car on a track doing hot laps, which to me defeats the whole purpose of a hot hatch. They’re supposed to be vehicles that are quick, but can also carve up the road.

Oh, and the brakes are a little grabby. Overall, the Focus ST feels a little sloppy. 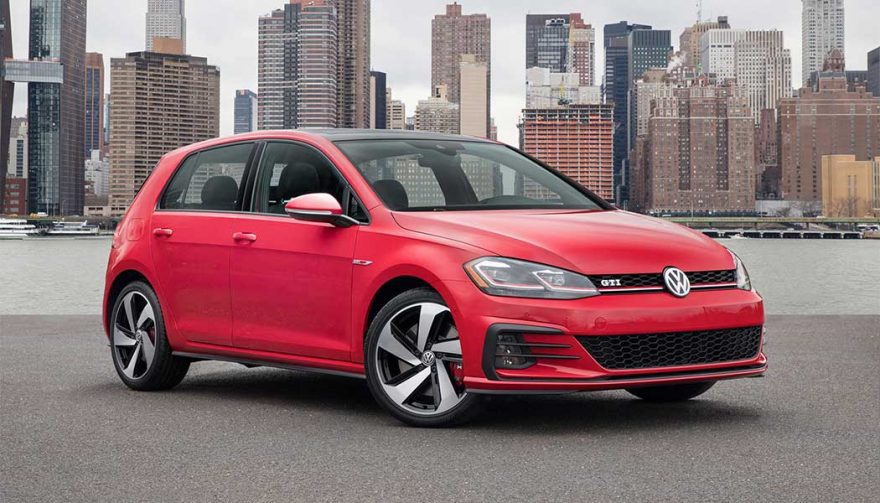 There’s a reason why so many turn to the GTI for affordable fun on four wheels. The MK7 doesn’t disappoint with a compelling package. At the heart is the EA888 turbocharged 2.0-liter TSI engine. While its displacement matches the ST, the peak 210 horsepower doesn’t even come close. However, 258 lb-ft of torque is more closely matched.

It might not seem sexy, but VW uses some cutting-edge welds for the chassis. The company claims the laser clamp welder creates joints that are four times stronger than traditional spot welds. What that means is greater torsional rigidity for the chassis, or improved handling.

As for the suspension, you get a strut-style setup in front, and a multi-link configuration in the back. You can add DCC adaptive damping for even more control.

Who hasn’t ogled the GTI? It’s a good-looking car, thanks to a restrained design inside and out. It lacks the overwrought styling you get on so many cars, like say the Honda Civic, these days. And you can get Clark Plaid cloth seats, which just throws in a retro nod you don’t get with other hot hatches.

The sport front seats are wider and have lower bolsters than the Recaros in the Focus ST. Ambient interior lights, including strips in the door panels, inject soothing red light to remind you this is a hopped-up VW Golf, not a regular commuter car.

Overall, the build quality of the GTI is impressive, especially considering its price point.

Flog the GTI all you want, this Volkswagen loves it and begs for more. There’s no chicane it won’t stick, no sweeping turn it won’t hug. The handling is amazingly balanced.

Sure, the GTI doesn’t boast monstrous acceleration. It pulls strong in straightaways, but you won’t pass a Corvette by dropping it into third. But it’s punchy enough to keep things interesting. And the brakes provide consistent, smooth, and immediate stopping power.

This car feels at one with you, like a glove with giant wheels and an engine.

Focus ST vs GTI: the Verdict

The GTI wins this one. Make no mistake, the Focus ST is fun to drive and it’s quicker. But it’s not nearly as refined. You’d expect sloppiness with an old muscle car, but a hot hatch is a different creature.

Ford could have spent more time fine-tuning the chassis. Instead, the car ultimately feels like a rush job, where a large turbo was slapped on a small engine, and that’s about it.

The GTI, on the other hand, inspires confidence and makes every drive a complete blast.