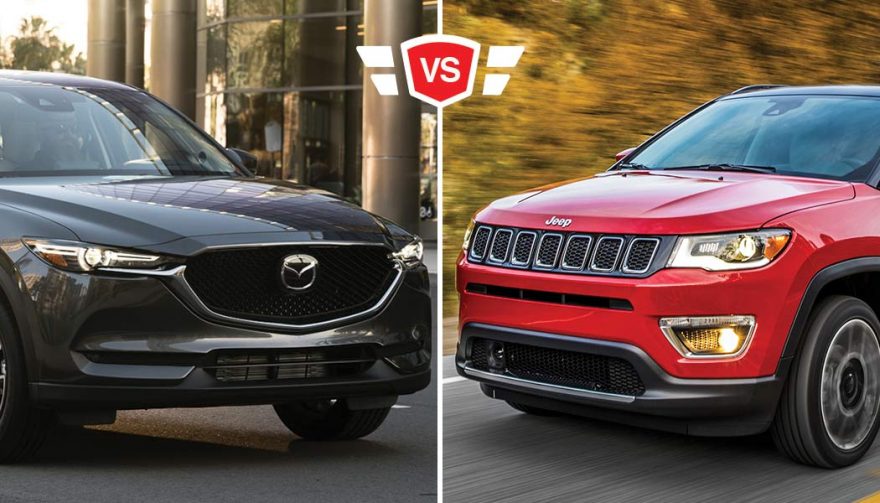 Let’s look at the Mazda CX-5 vs Jeep Compass match up. They are both compact SUVs, both all new for 2017. They both have all-wheel drive, four-cylinder engines that are around 2.5 liters and make about 180 horsepower.

They’re both focused on a single task, possibly more than any other vehicle in the segment, and they’re made by brands known for long-running, classic single-purpose vehicles. But despite the similarities the Jeep Compass and Mazda CX-5 couldn’t be much more different. Not just in the driving experience but in what they’re designed to do. The CX-5 is aimed at drivers, the Compass is aimed at off-roaders. 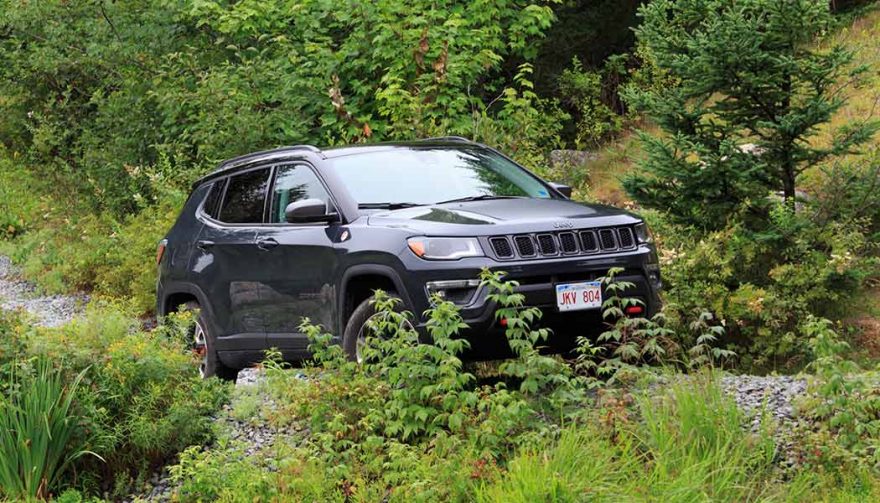 The 2017 Jeep Compass replaces the 2017 Jeep Compass. Yeah, it’s confusing. The old model – and I do mean old – replaced by an all-new crossover that shares the same model year. If you look at the two, it’s easy to tell which is new and which is old. Once you get in the new one, it’s hard to believe they share a model year or nameplate.

The Compass is designed to go off-road. Or at least to have the ability to do it. Jeep calls their all-wheel-drive system 4×4, in a segment of all-wheel drives. 4×4 models have 8.2 inches of ground clearance, more than an inch over the Mazda. The Trailhawk version even has a quasi-low range with a 20:1 crawl ratio. The Trailhawk gets a Trail Rated badge, meaning that Jeep is confident in its rock-crawling abilities.

Under the hood of the Compass is a 2.4L Multiair four-cylinder. The engine makes 180 horsepower and 175 lb-ft of torque. What’s unique here,  the Jeep Compass offers a manual transmission option with all-wheel drive. They even offer it on more than just the base trim. In fact, you can only get a manual on 4×4 Latitude models.

Sport and Latitude front-drivers get a six-speed automatic, with the rest of the line getting a nine-speed.

Fiat Chrysler had some issues when the nine-speed was new. It led to complaints about early vehicles and production delays. That transmission has now made its way into several more vehicles and everything has been smoothed out.

You May Also Enjoy:
The All-New 2017 Mazda CX-5: A Benchmark for Other Crossover SUVs 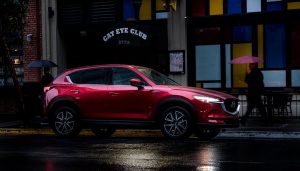 The start-stop system, though, needs some tweaking. When you release the brake to restart the vehicle, it fires up with a noticeable clunk. It also turns off the ventilation fan and stops the wipers if they’re in mid-swipe. It feels like you’ve stalled the vehicle, even in an automatic. The delay while all this happens means that you need to release the brake before the light turns, or risk being honked at while you wait for the Jeep Compass to come back to life. 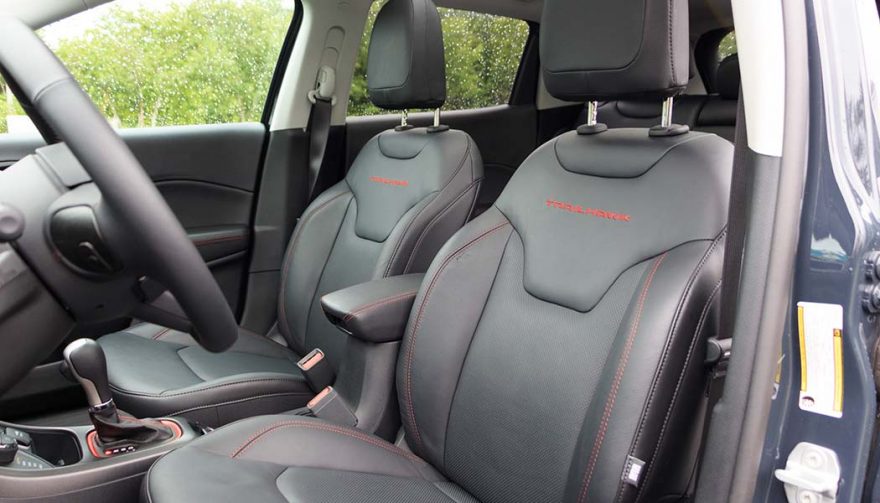 The interior of the Compass is a big upgrade. The new Compass offers a better design and better materials than before. The uConnect infotainment system is quick and responsive, and offers Apple CarPlay and Android Auto.

Although it’s nearly the same width as the CX-5, the Compass feels much narrower inside. The center console is slim and low down, under the driver rather than beside them. The cup holders are nearly under the front seats, making them awkward to use for larger passengers or those with a shorter reach.

The controls are well laid out, with big buttons and dials for the important things. And while most of the controls are in the infotainment system, everything important gets something you can see and touch. 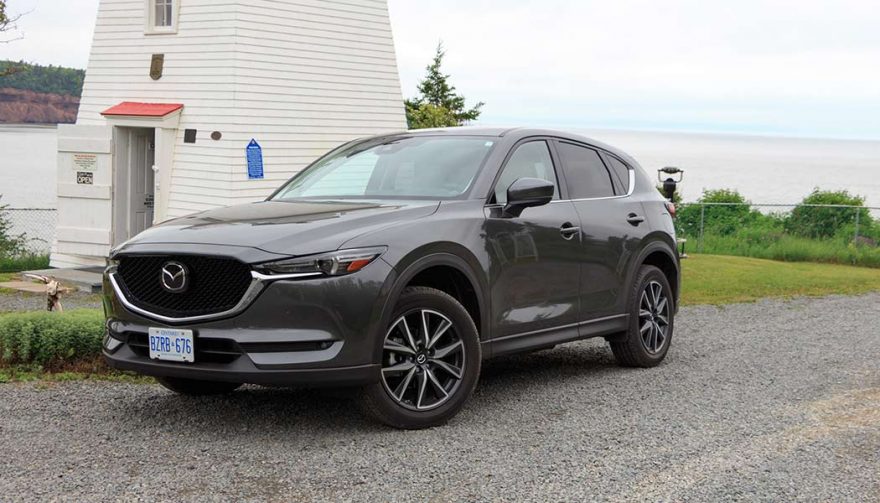 Mazda designed the CX-5 for people who prefer pavement. It’s the driver’s SUV, better for corners than canyons.  It’s lower, with less ground clearance. The all-wheel-drive system doesn’t lock, and it doesn’t have a low range. But it does send power to the rear not just for traction, but to fight understeer.

It also has is G-Vectoring Control. It’s a system that automatically eases off the throttle when you start to turn in. This puts more weight on the nose and makes corner entry better. It’s something that quick drivers probably already do themselves, but Mazda lets the computer do it for you.

The CX-5 starts with a 2.0-liter engine, for GX models with a manual only. Option the automatic or step up to GS and GT and you get a 2.5-liter four that makes 187 horsepower and 185 lb-ft. The automatic transmission is Mazda’s excellent six-speed. It’s one of the best automatics on the market and rarely makes a bad gear choice. The 2.5-liter four is smooth and powerful and likes to be driven hard. 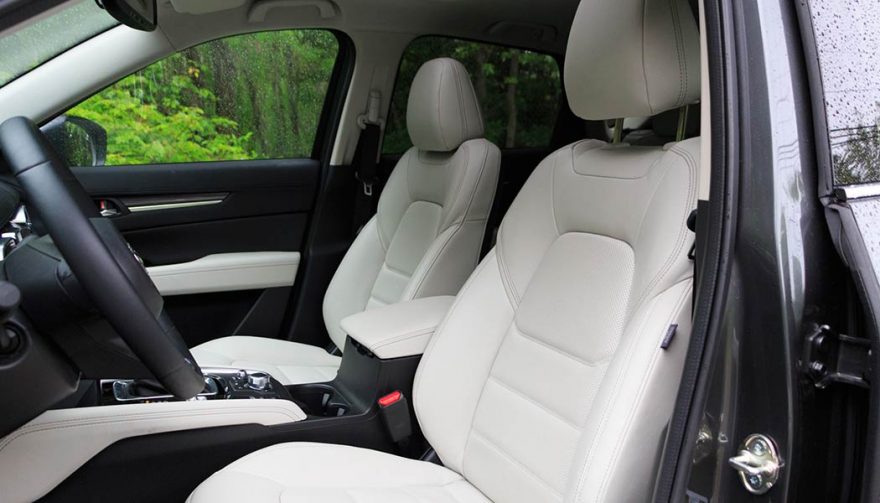 Inside, the Mazda feels upscale for this class. The interior design borrows heavily from the big brother Mazda CX-9, and that’s a very good place to start. The materials are excellent, and the controls have nice placement.

It feels much more spacious than the Compass, even though actual space is similar. It lacks CarPlay and Auto, but Mazda announced that both are coming soon. And if you already have a Mazda with Mazda Connect, then you’ll be able to upgrade your existing car. All the way back to 2014. Mazda’s dial-controlled system is already one of the best around for ease of use, so adding the connectivity features will move it closer to the top.

Behind the wheel, the Mazda CX-5 soaks up pavement bumps, and it corners with less roll than you’d expect from a compact crossover. You can feel theG-Vectoring helping you enter and exit corners. If the Compass is begging you to take that forest road on the GPS, the CX-5 is begging you to go a little bit faster on that off-ramp.

Are You Taking the Road Less Traveled or the Direct Route?

Jeep built their brand on the Wrangler. It’s the reason you think of off-roading when you think Jeep. Mazda’s history is building sports cars like the MX-5 and RX-7. And they’ve both translated that into their crossovers.

The Compass really does feel like a Wrangler behind the wheel. The same for the CX-5, it feels like a bigger, heavier, five-seat Miata.