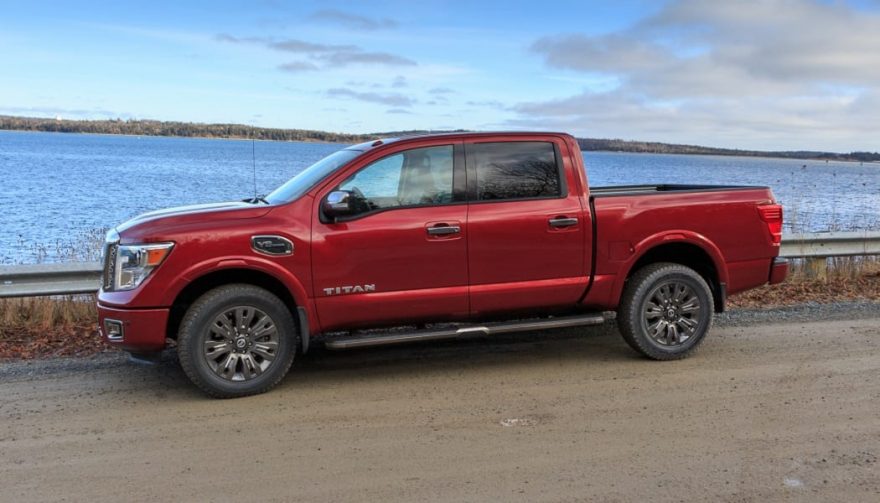 The Nissan Titan Platinum Reserve comes with a 5.6-liter V8

Every truck review written by a non-truck person has the same tired quip about how the newest crew cab half ton truck is as big as a house, a ship, an airplane, or something just as absurdly large. The Nissan Titan Platinum Reserve isn’t as big as a house, it’s a large pickup truck.

So how well does the 2017 Nissan Titan Platinum Reserve do the truck thing?

Well, for starters it does not ride or drive like a car. It rides and drives like a truck. While the 2017 Titan may certainly ride more like a car than a 1998 F-150, it still is most definitely a truck.

It’s very comfortable, soaking up some massive potholes and bumps without sending a jarring smash through the cabin. It can corner far more quickly than anything weighing the better part of three tons has any right to do, just don’t expect it to be too happy while doing it.

You can feel each bump as it rises up through the tall sidewalls of the 20-inch tires, compresses the rubber bushings, then the front coil springs. The front end then releases and you feel the rear end do the same sequence.

It all happens quickly, with a brief shudder, but that’s the real difference between car-like, and being a car. The shimmy is never bothersome, and it doesn’t upset the truck unless you are really pushing the limit in the turns, but it is there.

The next requirement for a truck is lots of power, and here the Titan delivers. The engine is a 5.6-liter V8, with an aluminum block and heads, which generates 390 horsepower and 394 lb-ft of torque. The engine has a wonderfully wuffly idle and delivers that power very smoothly.

Dry traction was limited by the snow tires my test truck was equipped with, but a turn of a knob into four-wheel drive showed that this truck will move when the gas pedal is prodded. The pleasingly lumpy idle turns into a much more aggressive sounding note as the engine speed increases.

You May Also Enjoy:
The Nissan Titan Project Basecamp Is the Ultimate Overlanding Machine 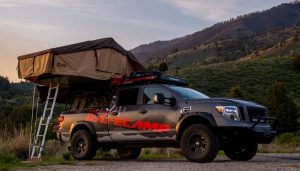 In short, this truck sounds as good as a big V8 should and encourages you to make some noise. I even found myself toggling the remote start just to hear the engine from inside my house.

The bed on this crew cab truck is five-and-half foot, and there are no hidden compartments like in the previous generation Titan. It does have a system of rails on the top of the box side and in the floor. The rails come with tie-downs that will lock into place anywhere you want in those rails. The system is excellent for strapping down cargo that you want to keep inside.

Payload in that bed is 1,584 pounds. That number is not class leading, but if you want more weight, you would be better served by a Titan XD or a trailer. The tailgate drops with a soft-opening mechanism, but the reach to get something onto that tailgate is still high. This is getting more and more common across the market. It seems the GM twins are the only ones with a reasonable bed height these days. 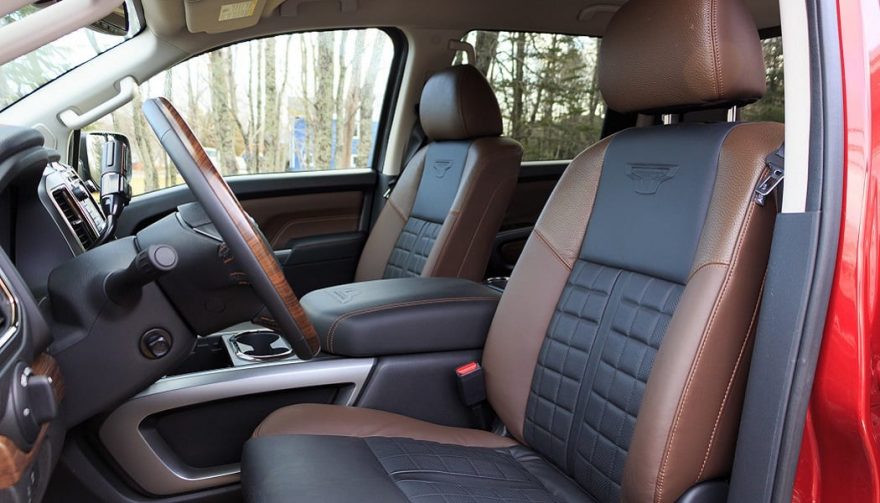 The cab is massive, with plenty of room for two in the front and three in the rear bench, but it’s by no means airy. A tall dash makes the windshield look surprisingly short, and my eyeline was closer to the headliner than is expected in something this large.

The center console is enormous, big enough to hold a letter-size sheet of paper laid flat, but it pushes the driver and front passenger outward which contributes to making it feel more cramped.

The infotainment system comes with navigation and a surround view camera, all on a 7.0-inch screen. Most of the controls are via buttons, knobs and dials, and it’s all easy to use. The buttons are all big enough to operate even with heavy gloves on.

The stereo is a 12-speaker Rockford Fosgate branded system with USB, Bluetooth and AUX inputs along with satellite radio. The sound quality was excellent, and even at it’s loudest volumes, there were no rattles from the cabin.

The one real letdown in the cabin is the position of the column shift lever. When in “D” the lever hid the temperature and defrost controls. Several times I accidentally knocked the truck into neutral while attempting to adjust them. The shifter also houses the tow/haul mode and easy-to-use manual shift buttons.

In the back, there is plenty of legroom and despite the upright appearance of the seat back it was comfortable for even long trips.

Under that rear bench is a locking storage compartment that runs the width of the truck. It can be used with the split bench folded or in place, with a storage cover that folds up when not in use.

With an EPA rated 15 mpg in the city and 21 mpg on the highway, the Nissan Titan Platinum Reserve might not be the best daily commuter. But if you like trucks, you’ll love this one.

It’s a real-deal full-size truck that is comfortable, capable, and does what trucks need to do. And Nissan even sells it with two-tone paint.