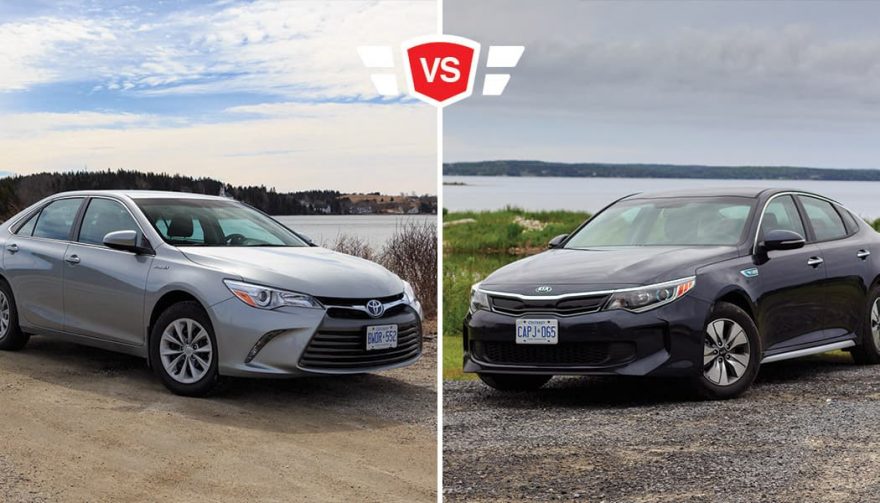 For years, Toyota has ruled the hybrid roost. After all, they were the first with a mainstream model, the Prius sedan (sorry Honda Insight, you were just a little too strange for prime time). Since then they’ve done an amazing job at spreading their hybrid powertrains from their smallest cars all the way up to the Highlander SUV. But when it comes to midsize sedans, they aren’t the only game in town anymore. Kia has just launched the second generation of their Optima hybrid, and it’s a serious effort from the brand. So how does the Optima compare to the Toyota Camry hybrid?

The Kia comes out swinging. The Optima gets a 2.0-liter four-cylinder that makes 154 horsepower and 140 lb-ft of torque. Add the electric motor and there is a total of 192 horsepower. That’s nearly identical to the 156 on the engine and 200 horses combined that the Camry manages from its 2.5-liter four-cylinder.

A 1.6 kilowatt-hour nickel-metal hydride battery helps save fuel in the Camry. It’s an old battery type, but one that Toyota has been using reliably with the Prius for longer than anyone else has been making hybrids. An EV mode will let the car run on electric power only at speeds up to 25 mph, as long as you take it easy on the accelerator. The Camry hybrid gets an EPA rating of 42 miles per gallon city, 38 highway.

In the Optima, you get the 1.76 kWh lithium-polymer battery. It’s a much more high-tech battery chemistry that lets the Optima have as much electricity in a smaller package. There is no electric-only mode, but the same careful use of the accelerator will get you from 0-60 solely on electrons. Be patient, though. The Kia Optima hybrid is rated for 39 mpg city, 46 highway.

The Kia takes that better automatic gearbox and runs with it. The Kia Optima hybrid is much better to drive than the Camry. It handles better, feeling much more composed on the road and with less body roll in corners. Neither of these is exactly a corner carver, especially on low rolling resistance tires, but the Kia gets surprisingly close to the fun-to-drive king of the segment, the Mazda 6. The Camry takes a slight win when it comes to ride quality. Toyota’s just been doing it longer, so the Camry does a better job of taking the harsh edges off of bumps. That said, the Optima isn’t far behind.

Spend any time in the Toyota Camry hybrid, and it’s impossible to not know it’s a hybrid. From the CVT whine to the steering, and everything in between, there is always something happening to let you know it’s a hybrid. There are hums, clicks, whirs and a cacophony of strange noises. Sitting in the car after it’s shut off and the noises are unnerving. The Kia doesn’t do any of that. Aside from the extra hybrid gauges and a slight pulse in the brake pedal from the regenerative system, there are no clues that you’re saving gas.

You May Also Enjoy:
Kia Optima: Bang For Your Buck 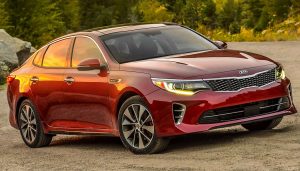 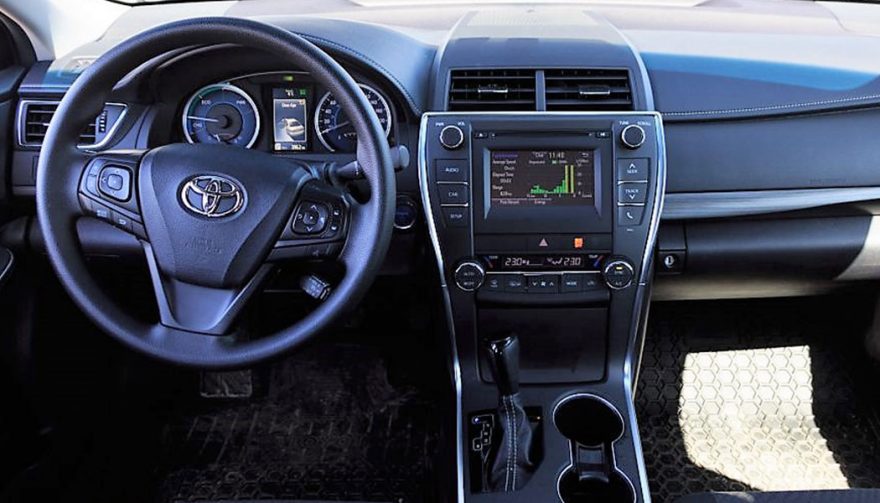 The Camry has a B setting on the shifter. B stands for braking, and it maximizes regenerative and engine braking. Use B properly, and you’ll massively reduce your use of the real brakes. Not needing to use the brakes on hills is one of the best parts of driving a hybrid. Using B helps you charge the battery for the way back up the hill too.

Kia hasn’t given the Optima anything like that. You can choose gears in the automatic, but it never delivers engine or regenerative braking. The gauge cluster only shows regeneration when you tap the brake pedal, but it’s hard to make sure you’re using electric braking instead of mechanical braking.

These are both big cars, with lots of room inside for five riders. They’re both hard to see out of too, with sculpted trunks and swooping rooflines blocking your view to the rear. Fortunately, both have rearview cameras.

Head and legroom are nearly the same for both. The Camry has about 3 inches more legroom in the back, but neither of these cars will leave you feeling cramped.

The base trim model for each – the Camry LE and Kia LX – both come with cloth trim, power seats and keyless ignition. They also have touchscreen infotainment systems with lots of hybrid-specific information, but Kia’s system has Apple CarPlay and Android Auto. Toyota uses their own Entune multimedia system. It will control your devices, but it’s never as seamless as CarPlay and Auto.

The Optima’s interior feels much better than the Camry. It has nicer trim, and a much more modern feel. The Camry’s screen looks much smaller, and the buttons flanking it feel more flimsy. Despite that, the ventilation controls are more straightforward and easy to use. 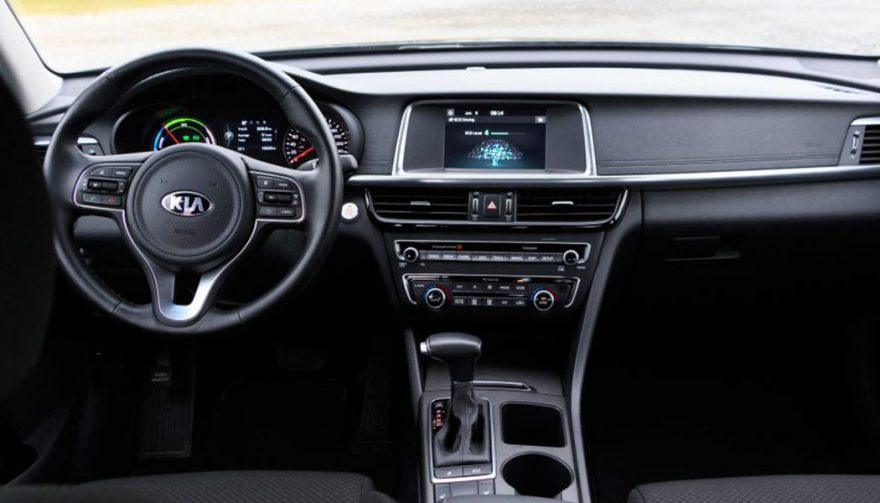 In the trunk, the Toyota Camry hybrid loses some space to the non-hybrid version of the car but still comes in at a usable 13.1 cubic feet. The Optima’s floor mounted battery doesn’t lose space to the non-hybrid model, but it’s not much bigger at 13.4 cubic feet. Both of these cars have clever battery mounting that allow for folding rear seats, although only half of the Camry’s back seat can fold.

If you want some luxury with your fuel-sipping, both are available in more posh trims. Camry brings you the XLE which has a JBL stereo and leather seats. If you want more, a sunroof is available and you can add tech features like navigation, blind spot monitoring, rear cross-traffic alerts and radar cruise control. The Optima EX adds a Harman Kardon system with 10 speakers and navigation as well as leather seating. Tick the option for the tech package, and the Optima is better equipped than the Camry. It adds a sunroof, rear park assist, radar cruise and emergency braking, but it also gets LED headlights, rear window shades and ventilated front seats. For a really bold look, all-white leather seat trim is available.

The base Optima hybrid stickers at $795 less than the Camry. Loaded up, the Optima costs $2,115 more than the Camry but does have better equipment. It also gets slightly better fuel economy.

The Toyota Camry hybrid never lets you forget that it’s a hybrid, but the Optima doesn’t often let you know that it is. 2017 is the last year for the current-generation Camry, and the hybrid system is showing its age. If you’re a driver you’ll like the Optima better, and it has the better infotainment system.

These are both great sedans, with excellent fuel economy. However, the nod goes to the Optima for its better handling, fuel economy and that six-speed auto.