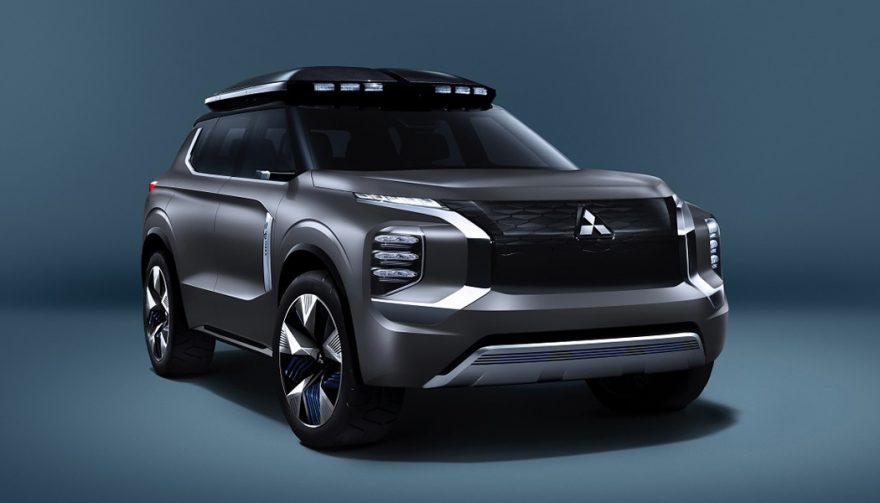 What a wild year! We started out with the Detroit Auto Show with stunning displays of elegance like the Lincoln Continental 80th Anniversary Coach Door Edition, along with several models that we could potentially see in production. Then there was the Geneva Auto Show where the industry shows off their hottest concepts and ideas. Much awesomeness. The Concours d’Elegance gives us a sneak peek at the crème de la crème in the automotive industry, and then there were one-off flops like the Tesla Cybrertruck’s “bulletproof” windows and the Infiniti QX electric concept that had stage fright at NAIAS. Honestly, it was tough to make my picks for the best concept cars of 2019. In the end, these were the eight models I decided deserved the spotlight.

Not much of a Japanese name for this concept, is it? It’s also not a model that seems like it would fit the climate in Asia, but it certainly would around North America. A three-row SUV in the midsize crossover segment, it’s a plug-in hybrid vehicle with all-wheel control.

The Engelberg uses a Twin Motor system at front and rear and has an all-electric range of 70km, or 44 miles. Total range is 700km or roughly 440 miles with a full charge and a full tank. What’s really intriguing is that it’s said to have the handling of the Evolution. Plus, the designers kinda nailed it with the design.

It’s been a long time coming, and GAC Motors is a step closer to reality in the US. Designed in LD, the Entranze concept is what they call a “Hyper Family Car”. Like many others on this list of the best concept cars of 2019 it’s an all-electric concept. It has a low-slung stance like a sedan with the spacious cabin of an SUV. But that’s not really unique, is it?

The 3+2+2 seating IS unique to the Entranze – that’s a front bench seat for those who are counting. And the optics are unlike anything I’ve seen before. Transparent doors with the rear doors being suicide-style are bizarrely cool unless you have to scratch indecent places. Cork is the material of choice in the cabin. We won’t see this exact concept roam the roads, but hopefully it’s spurring ideas for their engineers.

There’s the Vanquish concept that turned heads, but it’s the Lagonda All-Terrain Concept that caught me staring. The oddly pointy back end is oddly gorgeous, and the interior is ultra-clean with gauges mounted in the center of the steering wheel and a rotary shift knob postured in the console. Immense front doors open normally, but the rear doors are rear-hinged in the popular suicide look. We’re not sure what the opening glass panels are above the rear seats, but that’s a minor detail.

And yes, it’s also an all-electric which should have phenomenal performance with a name like Aston Martin backing it up.

This year in Shanghai, Karma Automotive showed off the SC1 Vision Concept. It’s an exaggerated two-seater roadster with a long wheelbase and the biggest. Doors. Ever. The wing doors must be nearly 10 feet long and open vertically. Karma says it’s meant to look like a fighter jet’s canopy opening, but the SC1 could very well take flight with a heavy gust of wind.

Karma doesn’t plan to manufacture the SC1 roadster, though. Bits and pieces could be implemented into future designs including the SC1’s all-electric powertrain.

Q4, we’ve been expecting you. This compact SUV is Audi’s all-electric crossover and this best concept cars of 2019 will be an actual production model, or at least something very close to it. Although it’s been tweaked, you can see glimpses of Audi’s signature style in the Q4 e-tron with the squarish stance, reserved details, and of course, the four rings on the grille and liftgate.

The Q4 e-tron is expected to have a combined 302 horsepower between two electric motors and accelerate at a reasonable 6.3 seconds from 0 to 60mph. A fast-charging 82 kWh battery should provide a few hundred miles or range too.

Subaru seems to have taken a step backward with the Levorg station wagon prototype, but it’s their VIZIV Adrenaline Concept SUV that we’re interested in. Finally, Subaru has a rugged SUV you’d actually take off-road. High wheel wells in textured plastic, swept-back headlights, cladding all around the vehicle, and even skid plates are part of this model.

There may not be a ton of information available about the VIZIV Adrenaline Concept but if it’s from Subaru, you can count on two things: a BOXER engine and Symmetrical AWD. Please, please, please make this one.

You can depend on Bentley to mark a momentous occasion like a 100th anniversary. The Bentley EXP 100 GT does the job nicely with one of the best concept cars of 2019. Modern retro touches and a steampunk-esque grille are mated to incredible engineering. Made mostly of carbon fiber and aluminum, the EXP 100 GT is bound to be light despite its 20-foot length. The doors scissor upward and take a section of the glass roof with it.

Luxury is the name of the Bentley game, and the EXP 100 GT showcases it. Adaptable Biometric Seating is just one facet, not to mention the awe-inspiring use of riverwood, a floating console, fully-autonomous capabilities, and on.

It looks a little like a matchbox car, but the Genesis Mint is for big kids instead. The short-wheelbase sports coupe is once again an all-electric model, like many of the best concept cars of 2019, with 200-mile range and has styling cues that tell you that – namely, the lack of an air-channeling front grille. The Mint Concept’s sweeping roof and bulging rear fenders look vaguely like the Volvo C30 but, you know…different.

Inside, the mint isn’t pastel green. The two-seater has a square steering wheel and six small screens around the steering column for a driver display. What’s eye-catching about the Genesis Mint, though, is the rear passthrough with scissor-style openings behind the front doors.