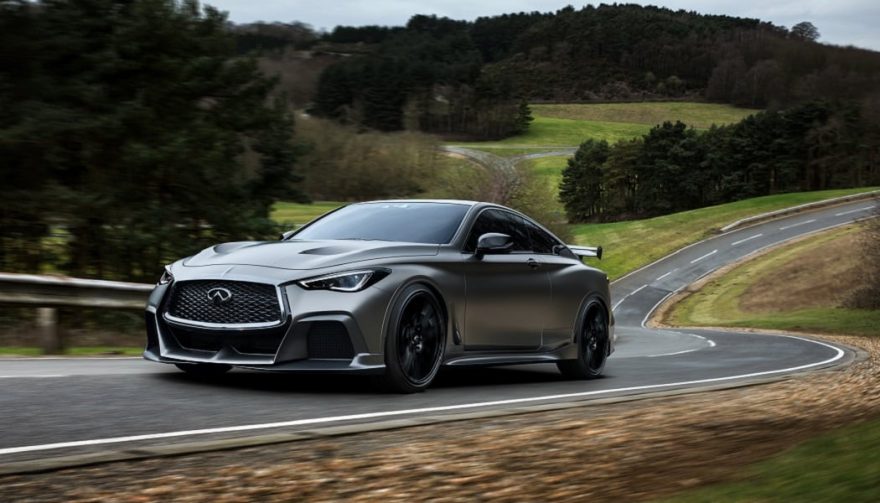 Project Black S: Infiniti Is Finally Getting a Halo Car

Production of the Infiniti Q60 Project Black S has been confirmed, according to multiple reports. It looks like the luxury Nissan offshoot is finally getting a halo car.

The brand has never produced a halo car, despite having flirted with the idea for years. Finally, the dry spell looks to be ending, because the Infiniti Q60 Project Black S is transitioning into a production model.

Like any halo vehicle, the production version of this car could seriously influence how people view Infiniti. Having something that can hang with the BMW M4 and the Mercedes-AMG C63 Coupe is a big deal.

A Formula One Connection

The wild take on the Infiniti Q60, the Project Black S, made its debut during the Geneva International Motor Show. The concept immediately made waves and got people’s hopes up. Thankfully, it wasn’t a tease like the Q50 Eau Rouge concept.

Adding to the extreme nature of the concept is the fact the Renault Sport Formula One team was a strategic partner with its development. The motorsports team lent a hand with the hybrid tech, and the results are almost too good to be true.

Under that sexy hood is an even sexier powertrain. A twin-turbo 3.0-liter V6 engine throttles out about 500 horsepower. To extract that kind of output, the engine likely is working with two electric motors. I say likely because Infiniti isn’t divulging the exact hybrid setup, but that’s the one used in modern F1 racers.

Infiniti is saying the hybrid powertrain is “Formula One-inspired.” That would mean one motor is mounted to the engine, while the other one connects to the turbocharger system.

This new Infiniti Q60 will be the first production vehicle to use an energy recovery system (ERS) that’s inspired by Formula One racers. Recovered energy goes into high-rated discharge lithium-ion batteries. When necessary, they help turn the crankshaft and turbocharger turbine blades more rapidly, giving the whole powertrain a big boost. 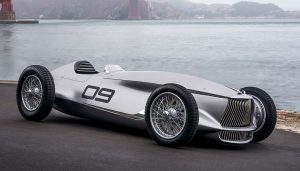 Engineers at Infiniti think the tech could increase maximum output by up to 25 percent, so it’s a big deal. It could also mean no turbo lag.

To help with airflow through this hybrid powertrain, Infiniti is using a titanium twin exhaust system. To keep the concept firmly planted at all times, and to maximize traction, Infiniti went large. The car rides on wide 21-inch forged wheels. Instead of adding weight, they’re engineered to cut down on unsprung mass.

In addition, the carbon fiber fenders, side skits, front splitter, and rear diffuser will receive considerable help from the Renault Sport Formula One team. Through this and other lightweighting methods, the brand is looking to balance out any weight gain from the hybrid components.

Other exterior details help the Infiniti Q60 Project Black S performance. For example, aero blades in the side sills just forward of the rear wheels send the air around the lower portion of the car, combining with the diffuser.

The wheel arches are flared. They boost aerodynamics further and give the vehicle a more muscular look.

Big front air intakes help cool the engine and brakes, along with heat extractors in the hood. The huge rear wing is fixed for stable downforce at speed, plus it’s made of carbon fiber.

You can thank a man from BMW for this new halo model. Yes, that’s right, BMW. Roland Krueger is Infiniti’s CEO, and he used to work for the German automaker. He’s reportedly been the driving force behind this latest concept, because showing what the company can do with extreme performance is a big deal to him.

This is why having cross-pollination between automakers, thanks to the poaching of executives, comes in handy. Hyundai and Kia have been benefitting from some key talent acquisitions, and now it’s Infiniti’s turn.

Adding to the good news, it sounds like this is the beginning of a whole line of Infinitis that are geared more toward hardcore performance. The brand’s flirted with performance in the past, but hasn’t produced anything that can really give the Germans a run for their euros.

We don’t have a release date for the Infiniti Q60 Project Black S, but it should be soon. During a recent interview with Drive, Infiniti Australia division head Bernard Michel revealed the car was at the “advanced” stage of production development.

Likely, the production car will retain the ridiculously long name of the concept. The brand might drop the “Project” portion, but that would be it. If you think the name’s too long, just check out some of the models being made by BMW and Mercedes these days. You might change your opinion.

Infiniti is probably going to pump out a bunch of Black S models in the future. Each one will leverage Formula One technologies, which is an interesting approach not being used by other mainstream brands right now. That alone could make it a standout from the competition.

Whether all of these models will be cars or some will be crossovers remains to be seen. Let’s hope the latter never happens.