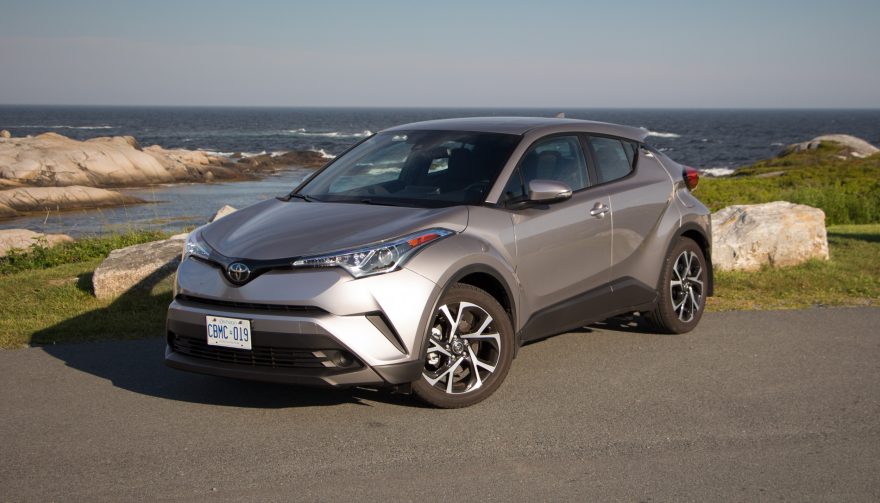 Toyota calls the new styling on the C-HR "diamond-like"

Toyota C-HR: Is It the Best Driving Four-Door Toyota?

I’d like to get a few things about the Toyota C-HR out of the way right off the bat. No, it doesn’t have all-wheel drive. Yes, it has poor rear visibility. Yes, the styling is strange.

Here are my replies. For 99 percent of urban driving, even in the winter, front-wheel drive is just fine. I’ve spent my entire life driving through East Coast Canadian winters, and not once have I said, “I really wish I had all-wheel drive.” Buy four winter tires, call it done. The amount of fuel you save more than outweighs the traction benefits.

The Toyota C-HR does have poor visibility. But almost every other subcompact SUV has the same problem. So do most sedans, for that matter. But they have styling that is much less cool. Which brings me to the third issue.

The styling is strange. But see one in person, and it works. Toyota calls the new styling “diamond-like.” I call it unique. The combination of sharp lines, curves and cutouts is actually striking in person. In short, it works. Especially in the available two-tone colors.

That exterior design carries over inside. The dash and doors have a diamond-like trim, the center of the dash itself has a diamond shape, and look up and you’ll see diamond-shaped cutouts in the headliner. Toyota’s really sticking with a theme, and it’s a good-looking interior too.

The other issue is the infotainment system. It’s clear that this was supposed to be a Scion, and it uses the Scion-style aftermarket-look radio. It still uses Toyota’s own proprietary connectivity software and does not include CarPlay or Android Auto.

The C-HR, which stands for Compact-High Rider, comes in just one trim, XLE. You can get Premium package option. It’s simple and to the point.

You May Also Enjoy:
New Adventure Trim Adds Ruggedness to the Toyota RAV4

That single trim comes well equipped, and with 18-inch wheels. Inside, it has dual-zone climate control, a 4.2-inch info screen in the instrument cluster (with G-force meter). The seats are fabric trimmed, with eight-way adjustment for the driver and six-way for the passenger. The steering wheel is trimmed in surprisingly nice leather for the class. Infotainment comes from a 7.0-inch touchscreen. The backup camera screen is in the mirror, which is strange at first. Once you get used to it, it makes reversing much easier as you can quickly move between camera, rear-view mirror and exterior mirrors.

The low roof height and swooping rear look great but leave a small cargo area. Toyota says there is 19 cubic feet of space, but it looks smaller. The cargo space with the cover in place is about the height of a grocery bag, and not particularly wide or deep. There isn’t much room above the cover either. Drop the rear seats and there is 36.4 cubic feet. That roofline doesn’t cut into headroom in the back, and the rear seat has enough space for full-size adults. 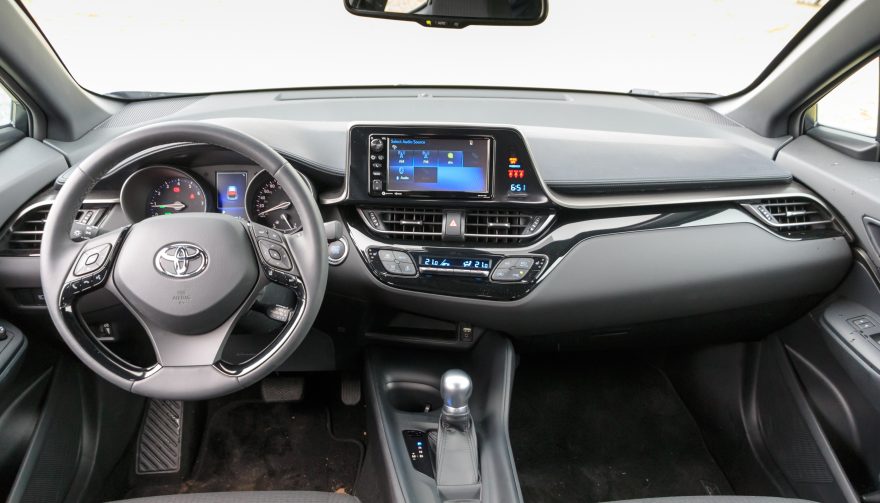 Toyota has loaded up the C-HR with safety gear. It has Toyota Safety Sense P, which includes a pre-collision system with pedestrian detection, lane departure alert with steering assist, automatic high beams, and radar cruise control.

Toyota’s gone big on safety, adding this system to most of its cars. It’s nice to have at this price point and in this size class.

The only engine choice for the Toyota C-HR is a 2.0-liter four-cylinder with Toyota’s Valvematic continuously adjustable valve system. It makes 144 horsepower and 139 lb-ft of torque. It’s not a powerhouse, but in this segment it’s more than adequate. It’s rated for 27 mpg city, 31 highway. I averaged 33 mpg in a mix of city and rural driving.

The only transmission choice is a continuously variable automatic. CVT’s have never been the preferred choice for enthusiasts, but Toyota has made this one behave.

It’s very responsive to throttle inputs and works well to hide the fact it’s a CVT. Instead of jumping straight to redline, the engine speed climbs more slowly. Like an automatic that has strangely perfect gears all the time. Keep your foot down for a long time and you’ll notice a slight whine, but it’s mostly unintrusive.

So when you drop the off-road pretensions of an SUV, it should drive better, right? The Toyota C-HR delivers. With the exception of the 86, this is probably the best driving Toyota you can buy right now.

The steering is modern-car numb, but has just the right amount of power assist. It’s well weighted when you want to toss it around. The suspension soaks up most bumps well and it rides quietly. It even has less body roll than you would expect.

It’s enjoyable to drive, and that’s not something that can be said of many subcompact SUVs. The only letdown is that certain bumps seem to overwhelm the suspension. Hit one of those and it feels like the pothole is coming right into the car. It only happened a few times during my week in the C-HR, but if your local roads resemble the surface of the moon, it’s worth keeping in mind.

The Toyota C-HR is a nice surprise. The bold styling turns heads, but doesn’t compromise passenger space. It drives surprisingly well, is very well equipped, and is priced competitively.

Toyota might be late to the tiny crossover party, but they’ve solidly hit the target with this one.