The new Volkswagen Tiguan gets an optional third row of seats

The New Volkswagen Tiguan Is Bigger, but It’s More Jetta than Golf Inside

As the SUV crossover market expands into more and more sizes and segments, some models are still trying to figure out where they fit in the market. Like the Volkswagen Tiguan.

All-new for 2018, the Tiguan grows by a whopping 8.5-inches over last year’s SUV, measuring in at 185.1-inches. That makes the new Tiguan one of the largest compact crossovers around. On the outside, at least.

That growth goes against some of the biggest – formerly, at least – in the segment are doing. The Chevrolet Equinox and GMC Terrain were the previous biggest in class, but were shortened by 4.7-inches and nearly 400 lbs for 2018. The new Tiguan goes the other way and is now about two inches longer than that pair. And about 300 lbs heavier than the old Tiguan.

It’s not the biggest SUV, but the new Volkswagen Tiguan does have more space. So what does that extra size give you? More space. Lots more space.

The new Tiguan’s cabin now has 13.2 cubic feet more cargo space behind the second row. Fold the rear seats flat and there are 16.9 cubic feet more than last year, offering 73 cubic feet of cargo space total. That’s near the top of the class, but not the best. The Honda CR-V is about five inches shorter but has almost three cubic feet more space thanks to better use of interior space.

The extra length of the Tiguan also gives you that optional third row. And it’s optional for good reason. Legroom in that third row is just 27.9-inches. That’s almost 10 inches less than the second row (which already drops 2.2-inches to give the back row any room at all). There is only 33.8-inches of headroom in the row. That makes it absolutely tiny in the way, way back seat. As a seat for kids, it works. But only if they’re old enough to be trusted to properly secure themselves. You don’t want to have to crawl back there to buckle them in.

And if you don’t need the seats, you really don’t want them back there. They take eight cubic feet out of the cargo space, and significantly lower the roof to floor height.

The new Volkswagen Tiguan gets a 2.0-liter turbocharged four-cylinder. It’s down 16 horsepower from last year’s smaller crossover and makes 184 horsepower.

You May Also Enjoy:
Volkswagen Atlas: Three-Row SUV Is a Gentle Giant on the Road

It’s also very diesel-like in how it sounds. Moderate throttle openings at 2,000-3,000 rpm will leave you hearing clatter that would make former TDI owners happy. At least until they get to the pumps.

The 4Motion Tiguan is rated at a decidedly not-compact 21 mpg city, 27 highway. That’s at the thirstier end of the segment. On the plus side, it does use regular unleaded instead of asking for premium like the previous model.

Attached to that 2.0-liter engine is a quick-shifting eight-speed automatic. It’s not a dual-clutch transmission, but the performance of the new Tiguan doesn’t suffer for it. The gearbox does a great job of being in the gear you want it to be in, and downshifts smoothly. All-wheel drive is optional, with front-drive being the default choice.

The new Tiguan’s 184 horsepwer doesn’t make it a rocket ship, but the power does put it ahead of most of the segment. It’s quick enough around town and on the highway. It does seem to get caught flat-footed from a stop, or when accelerating from single-digit speeds. Then, the Volkswagen Tiguan can take what feels like an eternity, but is really just a couple of seconds, to get moving. It’s frustrating in traffic or at quick stops. 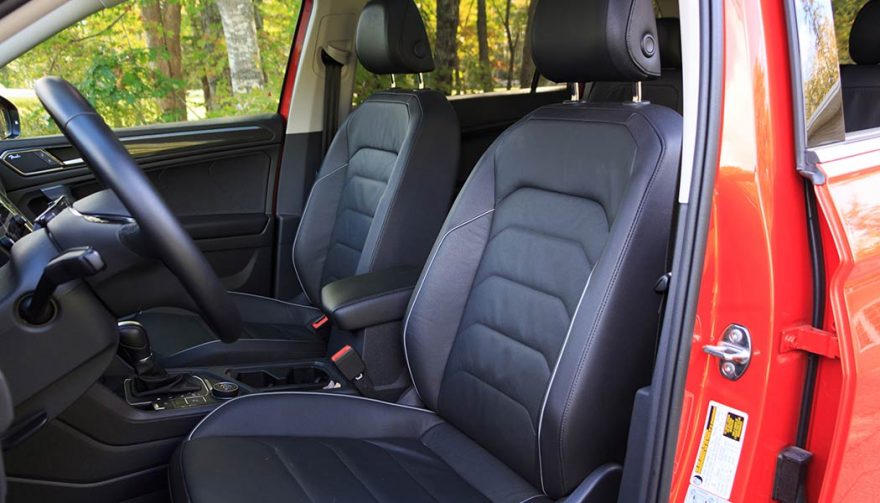 The cabin will be familiar if you’ve seen any of VW’s other current models. It’s sharp, stylish, clean and well laid out.

There is soft touch plastic almost everywhere. Except, disappointingly, the spot on the center console where your right knee is likely to hit when you’re driving. That spot is decidedly hard plastic, even though it gets soft just inches away.

The basic Tiguan gets a 6.5-inch touchscreen display, with an 8.0-inch screen for top-trims with navigation. They all get Apple CarPlay and Android Auto as standard.

Forward collision warning and autonomous emergency braking are available on all trims, although the package does cost extra on the base Tiguan. Top trim models get a 12.3-inch dashboard screen that is configurable to show a number of gauges and even the navigation map.

And while it’s strange that you can’t see the map in the dash and the radio screen like you can in the Audi A4, this is basically the Audi Virtual Cockpit with a VW badge around it.

The suspension is as firm as you would expect from a German crossover, but it has a little too much bounce over bumps. Body roll is surprisingly well controlled, and while the steering is lighter than the old model it still inspires confidence in the capability of the Tiguan in corners. It’s not going to encourage you to toss it down a back road, but as I wound it around the local coastline roads, the Volkswagen Tiguan was willing to play.

The new Tiguan looks and feels like a Volkswagen. Unfortunately, it feels more like a Jetta than it does a Golf. That means slightly cheaper materials and a bit less of that bank vault feel that the Golf delivers.

But it does still feel solid for the class, looks good and has lots of space. As long as you don’t actually want to put people in that third row.